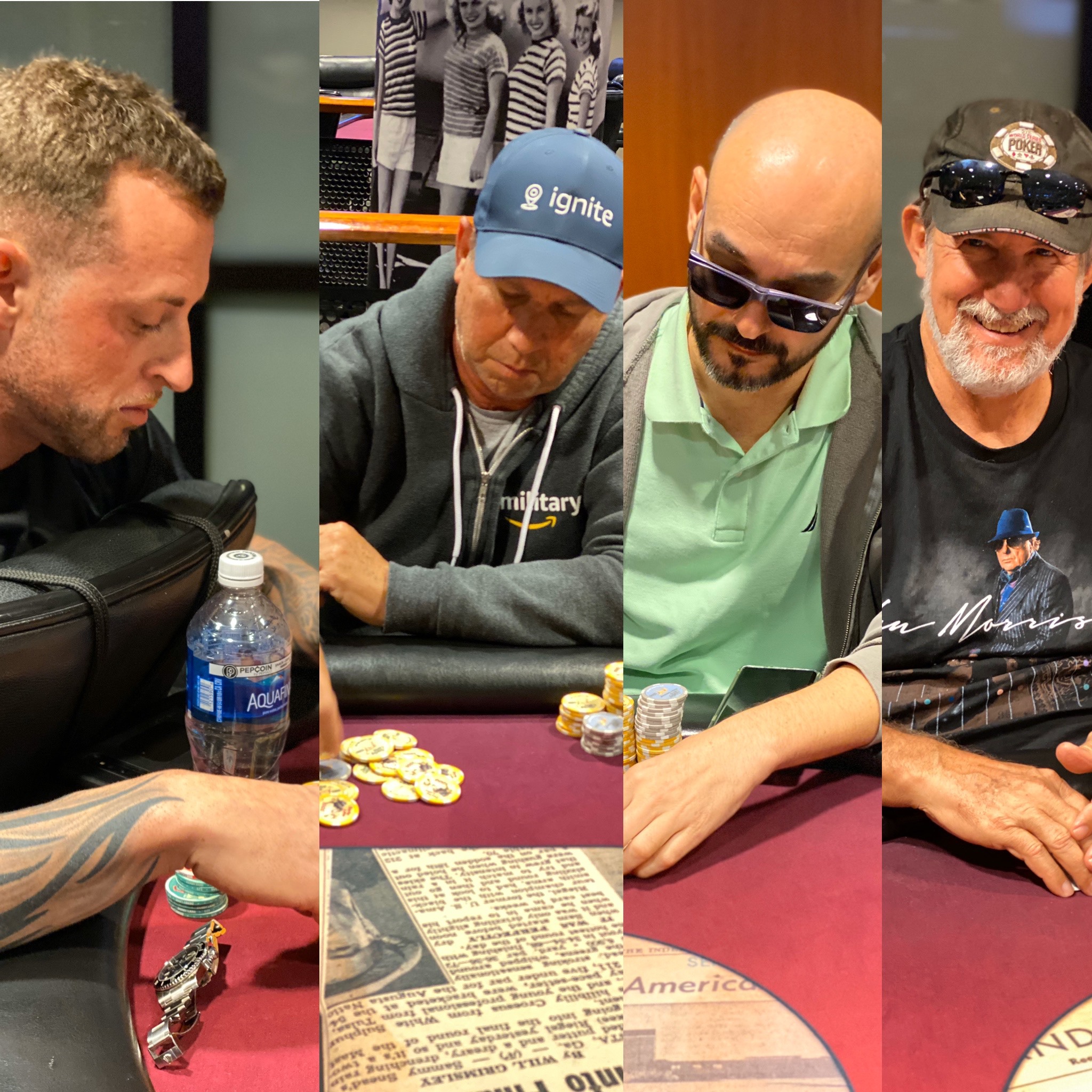 There was a traffic jam getting to Derby Thurs night due to a storm with high winds shutting down the skyway and exasperated by a crane tipping over on 275 near the track. Players slowly

arrived taking many different alternative routes and by the end of level two everyone had made it who planned on playing.  With the first WSOP Circuit event ever in the Tampa Bay area starting Thursday over at the Hard Rock in Tampa there was some competition for players who had conflicts on other days.

The $600 $500K guarantee ring event definitely had a pull.  The event runs from February 6 through February 17 with 14 ring events!  We expect many TBEPL members to cash or even win a ring with all the skills they have gained playing in the league.  Here is a link to the schedule: https://www.shrtpoker.com/wp-content/uploads/2020/01/19-SHRT-9138_Poker_WSOP_2020_8-5x11_Page1.pdf

John “Muscles” Gordon, an area notable,  arrived at his usual time and was seated at the feature table.  Soon after his arrival Dugg Hadden called a fairly decent raise by John and caught two pair on the river with Q4 ♣️♣️ to beat John’s 99 and putting a pretty big dent in his stack.  With 14K starting stack (15K for arrivals by the end of the first level) early stack damage can really take its toll.

Frustrated from the previous hand,  John Gordon woke up with KK on the next hand and pushed all of  his chips in against Dugg. Oddly, Dugg woke up with AA that hand and John was able to get a table change.

No one called Rob Benford’s all in for 11K shortly after John’s exit.  Rob didn’t even want to get involved with his QQ and fortunately Dugg did not have AA and did not call.

Paul, short stacked early, shoved and his  AJ>Dave B AT♣️♣️ for a double up!

Mo  then called with AA when Rob shoved his A8o before the reentry period was over.  Rob headed to the window.

Meanwhile at the outer table father & son were in a battle but Matt Trizis backed down to Steve Trizis’ all in and let his dad have the pot. Matt was playing as the one allowed season substitute for Clive who figured he needed to do something different to get a win.

Another hand at the outer table had Darryl > Rob Benford. Straight Flush> Q high flush. THERE ARE NO FRIENDS AT THE POKER TABLE!!  Rob was crippled but not out.

And Dave Bennett, on his second bullet, was out when he shoved all in preflop and Mo Maher called with QQ.

In a HUGE game changing hand at the feature table Paul Mastella was all in preflop and somewhat short stacked.  He was disappointed to have 4 calls though there was that chance to more than quadruple up.  Bill McKown then shoved on the flop. Dugg called. We had three players all in and both Dugg & Paul were sent to the rail by Bill. Big chip up for Bill to build a massive stack!

Later, after the tables were combined to two Bill McKown > Darryl Woodruff for the knockout!

Bill continued his good run when his QJ>Mo AQ for the knockout.  Mo had a big stack and that really led Bill to a dominating stack as chip leader!

SuperDave Kaucher had AA>Ed Sojack AT for the knockout.  With his 9th place finish this week, Ed Sojack maintained his 2nd place on the season leaderboard.  Ed has made 5 of 6 final tables so far this season.

With Clive missing this week due to a hockey game (allegedly) Steve Trizis was keeping him updated with hands and pictures.  Some may not have been real.  Clive was even in some of them.

Nobody called Steve whop played his K9 because we’re at Derby Lane. Ca-nine…

Jason has the romantic hand 6♥️9♥️ for the nine high like a Boss > Bill McKown.

Bill Mckown ‘s AT>Jason A9 with Jason finishing 8th this week.  Jason, who has played the Main Event for he league in the past, says he is just warming up and you’ll see him on top of the leaderboard soon.

Alerts were going off all over the poker room with tornadoes in the area. Everyone kept playing. Poker players are fearless…or something like that.

A much needed quadruple up for SuperDave!

Rob AQ>Derek K5 (who had Rob well covered) for a double up!

Derek hit a Full House to replenish his stack!

Rob A4>Steve QT for the knockout in 7th!  Steve, who has played the Main every year for the league, isn’t too worried.  Last season Steve had the same slow start then left for Greece and missed several weeks.  He came back, dominated, and won a Main Event seat.  He plans on doing the same this season but without the trip to Greece.

Andrea Ruosi 68♣️♣️ Straight > Andra Zachow’s Q9.  Andra checked the flop expecting a raise from Ruosi, instead he checked and when the turn gave him a hidden straight it was raise, reraise and then all in with Andrea knocking our season leader out in 6th.  Andra lamented not shoving the flop but usually a play like that works with a guy like Andrea she figured.  Andra has final tabled 6 out of 6 weeks and continues to hold 1st place on the season leaderboard.  Andra has 59 points with 17 points between her and 2nd place (Ed Sojack) on the leaderboard.  Is she going to go all the way?!!!

After Andra’s bust the four remaining players played on.  Rob Benford was out shortly after when Andrea’s AK bested his AQ.  Derek Csanadi then busted Andrea Ruosi to build a formidable stack and he and Bill McKown were heads up!

With the chip lead but pretty bad weather and a late night Derek agreed to a chop with Bill and both of them leapfrogged up the leaderboard to top 10 spots – they are 5th and 8th respectively.