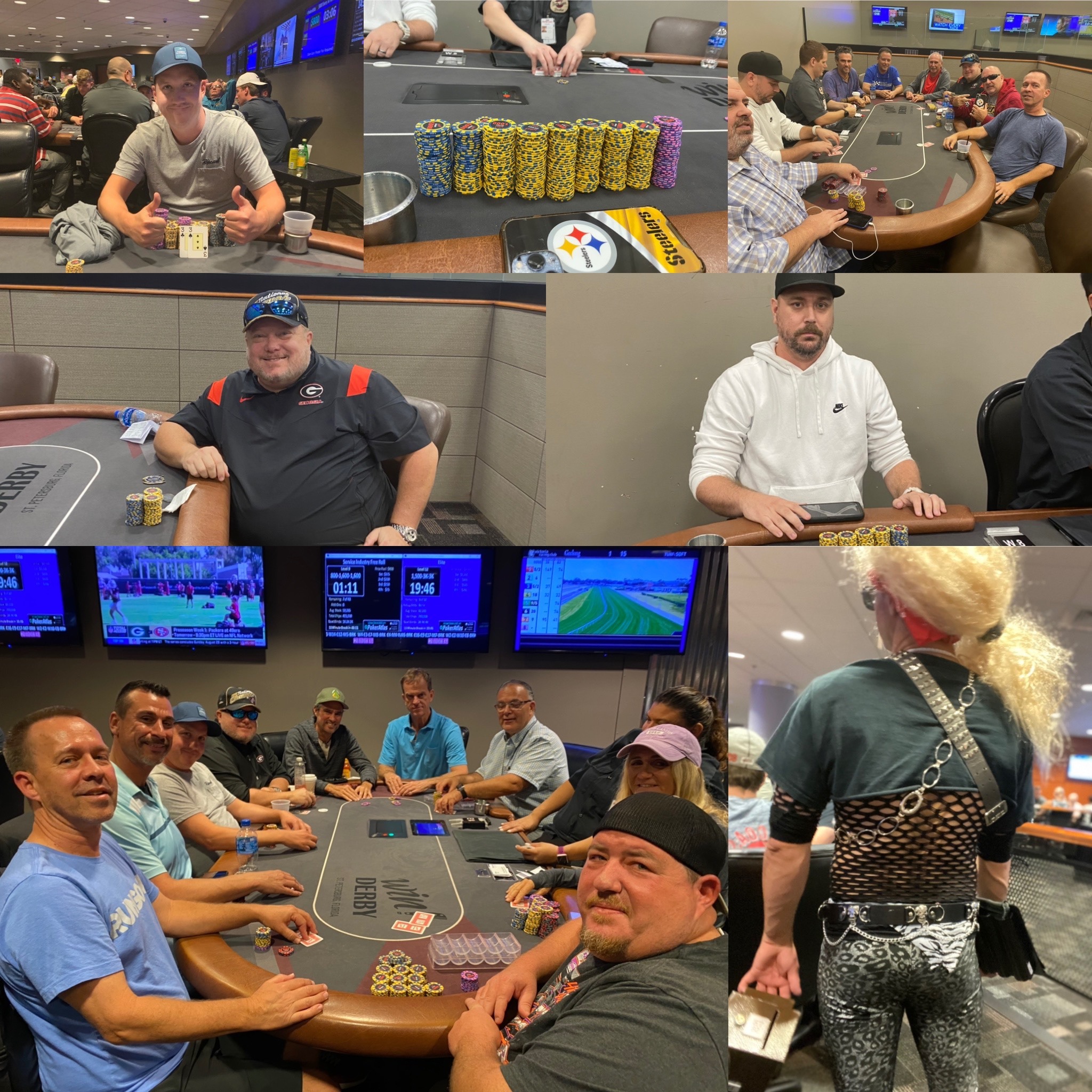 Only two weeks into the league we already have enough funds reserved for our first Main Event seat! We have 30 members this season after 5 new registrations this week! Registration is open for two more weeks as long as we have enough room at our league tables. We recommend signing up asap as you must play or have a substitute 17 of 20 weeks and we are already a couple of weeks in.

There was a high hand for Doc Brown at the feature table early in the night!

Andra Zachow shoved on the flop but Craig Rice had flopped a set of sevens leaving her on fumes.

But then she got some back from Craig in a similar hand. Unfortunately for Andra double X fumes isn’t a whole lot.

Then Cecil Riddle jammed when Andra hit her straight! Oh…..that was anticlimactic…

We have some new ladies playing this season – Susan McPherson & Marsha Wolak have joined long time members Andra Zachow, Tina Pridgen and Chrissy Holubeck to represent more women in poker! Andra met Susan back in December 2015 when they were part of a chop at the Ladies Event at the SHRT Winter Poker Open! Poker is a great way to meet people and make friends!

In the next hand Andra’s husband Mark’s AA>Steve’s 77 to punish him for his poor treatment of Andra.

At the outer table Susan McPherson and Shawn O’Brien, another new member in the league, were in a big hand. In the end Susan folded & Shawn showed his broadway.

And then Clive Gavin was out!

A double for Doc Brown!

Jacob’s AK>Susan’s A3 for a double

Marsha’s AT>Susan’s KT brought us to our final table.

Marsha, with a substantial stack, 99> Joe AK, Joe out 8th. The final table was moving along quickly.

Shawn’s A7> Jim “JDawg” Collins’ 56
Jim 7th. Shawn had accumulated HEAPS of chips at this point.

Craig A8> MarshaQ9 >Shawn Q9 for HUGE triple up

Craig’s A6 did not hold up against Shawn’s J9, Craig out 4th when Shawn hit the straight on the river.

1st hand of heads up
Jacob 33> Shawn A6 for the win! We were done by 12:03am! Pretty amazing for 37 entries (which included 9 rebuys by the close of registration after 1st break). 1st place paid $1255 and four were paid this week!

With his win last week and final table this week, Jim Collins still tops the leaderboard but Jacob, winner of one of the league Main Event seats last season, is a strong 2nd!