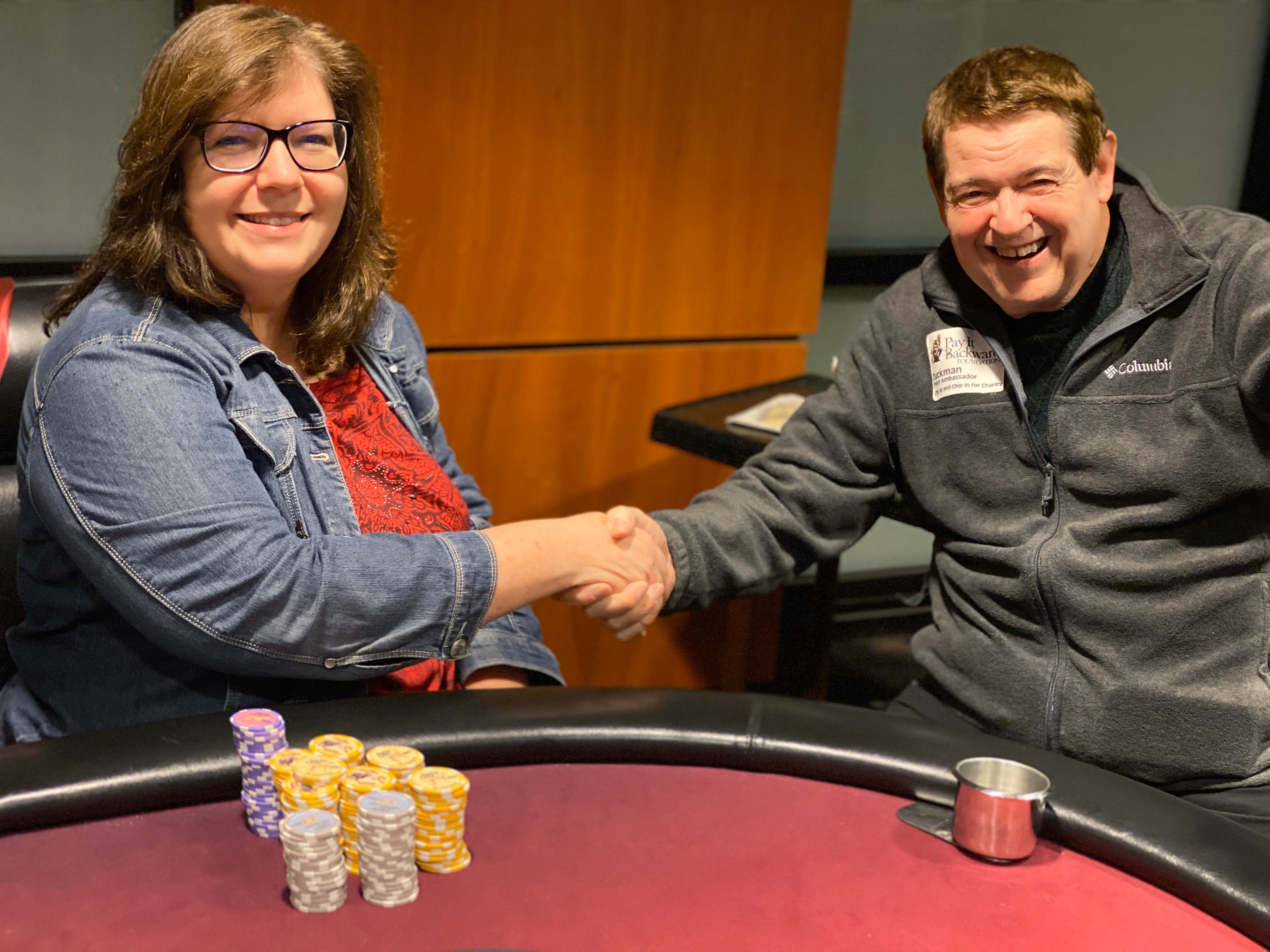 Andra Zachow is on fire with her 5th final table in five weeks and 2nd win – two in a row. After week 5 win/chop she maintained her 1st position on the season leaderboard.

Andra ran hot early in the evening but that didn’t last. In the end she was one of the shortest stacks at the final table – at one point down to a single big blind left if she didn’t win her blinds. But, as she readily tells everyone, she’s a “short stack specialist”!

With rebuys we had 30 buyins for week 5.  There are 16 weeks left of play and anyone can still win one of the  $10K Main Event Seat prize packages including $1500 travel money for this summer’s WSOP!  There will also be multiple $2500 prize packages including a minor event seat and travel money.  Everyone who makes the final table gets at least an extra point plus there are points for attendance.  First place is awarded 16 points and it goes down to 1 point for 10th.

Following are details of the week 5 play:

It was 6:46 when Steve “The Godfather” Trizis busted, a victim of the ruthless Andrea Ruosi! All in on the flop.

A flush is a flush, no matter how ugly it is…

Meanwhile at the feature table Andra Zachow had some early run good when her AA>Paul JJ. At 100/200 the bet by Paul was 500. Mo & Andra flatted. With an A on the flop and a set of Jacks for Paul it could only get ugly for Paul and Andra got the double up.

Rob QJ>Andra J9❤️❤️ which put a dent in her stack which early on was more than double starting stack.

Clive AQ>Mark 68 (Andra folded KK btw but as Mark says, noone cared what she folded)

Clive hit quads!  He had a nice stack early!

Ed Sojack’s 22>Clive QT when Clive was all in.  That was unexpected.

Mo QQ>Rob QK for the knockout

Mark Winchell’s All in  > Ed V for some much needed chips.

Marv A5> Darryl Q9 when Marv turned a wheel.

We had our final table! Marv “The Duckman” Karlins was the big stack!

Despite the somber looks everyone was having a great time!  They always do…  Thursdays are definitely something to look forward to.

Chop it up! Marv QQ =Andrea AA when the board flushed! A Queen came on the flop to give Marv his set but the river saved Andrea from his demise.

Andra A9>Doc B Q8 for a much needed double.  Doc B shoved his short stack and Andra called risking her tournament life.  She is known to be fearless.

Dugg AQ> Mo A8 when Dugg shoved to Mo’s raise.

Andrea 23>Mo’s AT for the knockout! Andrea had a nice stack of grey 5K chips and knows how to use them.

Bill McKown QQ>Duckman AQ for a HUGE double!  Duckman had shoved and Bill snap called.  This was the turning point that gave Bill a HUGE chip lead.

Duckman KJ>Dugg QJ for the knockout.  Dugg had stayed alive shoving several times before he ended his night with this hand.  The final table came pretty early in the night – around 9:30 but lasted forever!

Andra KQ>Andrea 9T.  Andrea flopped a pair and a Ten high flush draw and shoved.  Andra with the nut flush draw since an A was already on the board took a chance and rivered the flush.  She was running good again.

Duckman KJ>Doc B 99 for the knockout!  pocket nines were not working out very well at the final table.

Andra KQ>Marv Karlins AT for a much needed double! That was the first time she heard The Duckman utter “fowl language” 🤣😂😅 🦆

With 5 players left the Duckman, still with a formidable stack, started discussing a money chop since it was really getting late. He offered that Bill McKown, who had a monster lead but still at risk due to Marv’s still big stack, get a couple hundred less than first place money and the other four players could split the rest.  Andra eagerly agreed since she was the short stack.  Ed Sojack still had a couple stacks of yellows however and felt he could outlast Andra, forgetting she is a short stack specialist.  There was no agreement and play continued.

Shortly after the discussion Bill McKown KK >Ed KJ to knock him out 5th. This gave Ed Sojack the points needed to move him into 2nd place overall on the leaderboard making 4 out of 5 final tables so far. Ed finished 2nd last week.    The remaining four players agreed to chop the cash and play for points with Bill getting close to first place money and the rest splitting the remainder.

Marv KT>Ed V K5 knocking Ed Vanlandingham out 4th.  Both players had the K with a K high board but Marv outkicked Ed.

Andra KK > Marv 78 when she decided to slow play a little still with her short stack.  When The Duckman announced All In after flopping his pair of sevens Andra snapped called and surprised him with the strength of her hand.  There may have been some “fowl” language.

With a growing stack Andra 55> Bill A9♦️♦️ for a HUGE double and giving her almost as many chips as Bill and possibly more than Marv.

Marv and Bill were discussing that it seemed that Andra was unbeatable on this night and when she got her double Marv was ready to give up hope.

Shortly after Andra’s QJ>Bill J5ss when he shoved on the flop.  In the biggest hand of the night, Bill had flopped a flush draw and Andra had trip Queens.  With no more spades showing up Andra knocked Bill out – his stack had about a big blind less than hers.

In the end, it was very late & Andra & Marv chopped first place points (but Andra had more chips she wanted everyone to know).  As all poker players know, anyone can win heads up.