Week 6: A chop for Jim Brinkley’s substitute and Jacob Naumann! 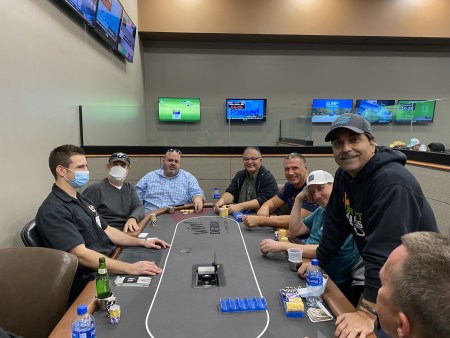 Joe was all in on the river and Dave B claimed to maybe be folding Jacks. Joe showed 22 for a set!

Dave Bennett, short, was all in on the river. Doc Brown called and Dave’s KK was better than Doc’s 8 (Dave thought he had the Q & started to get up…)

It was a draw Dave =Joe

Steve flopped the flush and was generously rewarded.

Steve talked a lot because he had trip fives

Huge double for Darryl when John G had the straight & put Darryl all in on the turn. Darryl called for the board to pair on the river & the cards listened. FH for Darryl.

Jacob found a fold with his QJhh

Kk At 600/1200 Jim “JDawg “ Collins raised to 4k, John G called. Jacob rr to 35K. JDawg tank folded. Jacob showed Ac. John G though a long time and called with 99 for all of his chips. Jacob turned over AK and flopped a K, turned an A for the knockout.

And Jacob sucked out on John Iemolo. We had our final table!

A double up for Mark

Dave Bennett was out 9th when Steve’s 88 held.

Jason was out 8th vs Jacob Naumann

Jim “JDawg” Collins was out 5th despite the Georgia Bulldogs winning the National Championship. You can’t win them all.

Andra was out 4th when Jim Brinkley’s substitute put her all in when the board flopped Ac3c4s and she had A2ss. Jim Brinkley’s sub had 5d6h . After tanking she called. He said “you’re good, six high” Then he hit the straight.

Steve doubled Jacob then he doubled through Jacob back up (this happened a lot).

Jacob knocked Victor out 3rd A2>55

In the end Jim Brinkley’s substitute fka “The Godfather” , out of the small amount of kindness left in his cold cold heart, chopped with Jacob Naumann and Jacob pulled back into the number one spot on the leaderboard!