Week 12: Rigged: A chop for Brenda and Dave Bennett 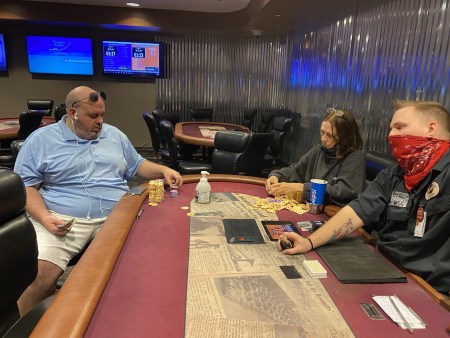 We’d like to thank our substitutes this week. We had Anthony Vitale subbing for Marv Karlins this week, Chrissy Holubeck subbing for Dave Miller, Brandon Byars for Wally, Chris Williams playing for Matt Trizis, and Tony Pellegrini playing for Andrea Ruosi. Andrea and The Duckman are expected back next week so watch out! The sub policy has worked well and allowed us to maintain the numbers needed to have five Main event seats and a couple minor $2000 packages and a freeroll package if we can average at least 22 entries (including rebuys) for the remaining 6 weeks of play. Qualified members (who have attendance including subs of 15 of the 18 weeks and 3 of the last 5 weeks) will be eligible for the freeroll if they don’t win a package. With 6 weeks left, 84 points (not including the weekly attendance point) are still up for grabs. That means all active members are still in reach of a Main Even Seat depending on what happens over the next 6 weeks.

Spring season winners: Our prior season (Spring 2021) freeroll is scheduled for Wednesday September 8. That should allow, depending on attendance, 3 minor packages of approx $1800-$2000. We will survey those members to determine.

At the feature table during level 2 Brenda raised, Andra called and Ed VanLandingham raised to about 2600. Brenda stacked up her chips & pushed them across the line. Ed snap called AKss, Brenda had AKo it was pretty boring after that since no magical flushes.

Brenda doubled up when she shoved her K3 into a AKK board. Anthony Vitale had the Ace which was no good.

Anthony, Playing for Marv, was all in & got his double with two pair.

At 300/200 In a pot raised to 1200 by Mark Winchell there were two calls and then a raise to 4200 by SuperDave Kaucher. Brandon Byars, playing for Wally, called the rather large bet. The rest snap folded. By the end Brandon was sent to the rail when his two pair was bested by SuperDave’s straight. Mark Winchell said he folded 88.

Anthony (Marv) had a full double through Brandon who was feeling a little gambly tonight.

The two short stacks, Brandon & Jason Barnett, were both all in & Jason had the best hand.

AK was good for a full double for Jason Barnett

Anthony (Marv)’s full house was good and Derek Worley was sent to the rail.

Jason was moved to the outer table, had JJ. Dave Bennet woke up with 22. Ooooh. Of course he hit another 2 and we want to the final table

Apparently Dave Bennett was the one to beat 😳

Jacob’s nut flush gave him a full double up.

Andra’s AJ was best and John “Muscles” Gordon was out 9th.

A straight for Ed and double throigh Jeremy!

Jacob was out 8th

Another double for Anthony Vitale through Ed Vanlandingham this time.

Ed was out 7th when SuperDave hit his flush.

Anthony Vitale was out 6th.

Andra’s AT was no good when Dave Bennett called with 55. She was out 5th. Andra has bee moving up the leaderboard and is now in 6th place.

Jeremy was all in and Dave Bennet & Brenda Worley callexd. Brenda bowed out after Dave bet the flop and Dave’s Q was good. Jeremy out 4th.

SuperDave Kaucher was out 3rd for a much needed ladder up.

Brenda and Dave Bennett were heads up. Brenda’s won or chopped the last three weeks in a row! In one of their all ins heads up they had the same hand.

And another double for Brenda.

At that point Brenda and Dave Bennett decided to chop.