Week 7 SuperDave Kaucher takes it down but Andra Zachow still #1 on the leaderboard! 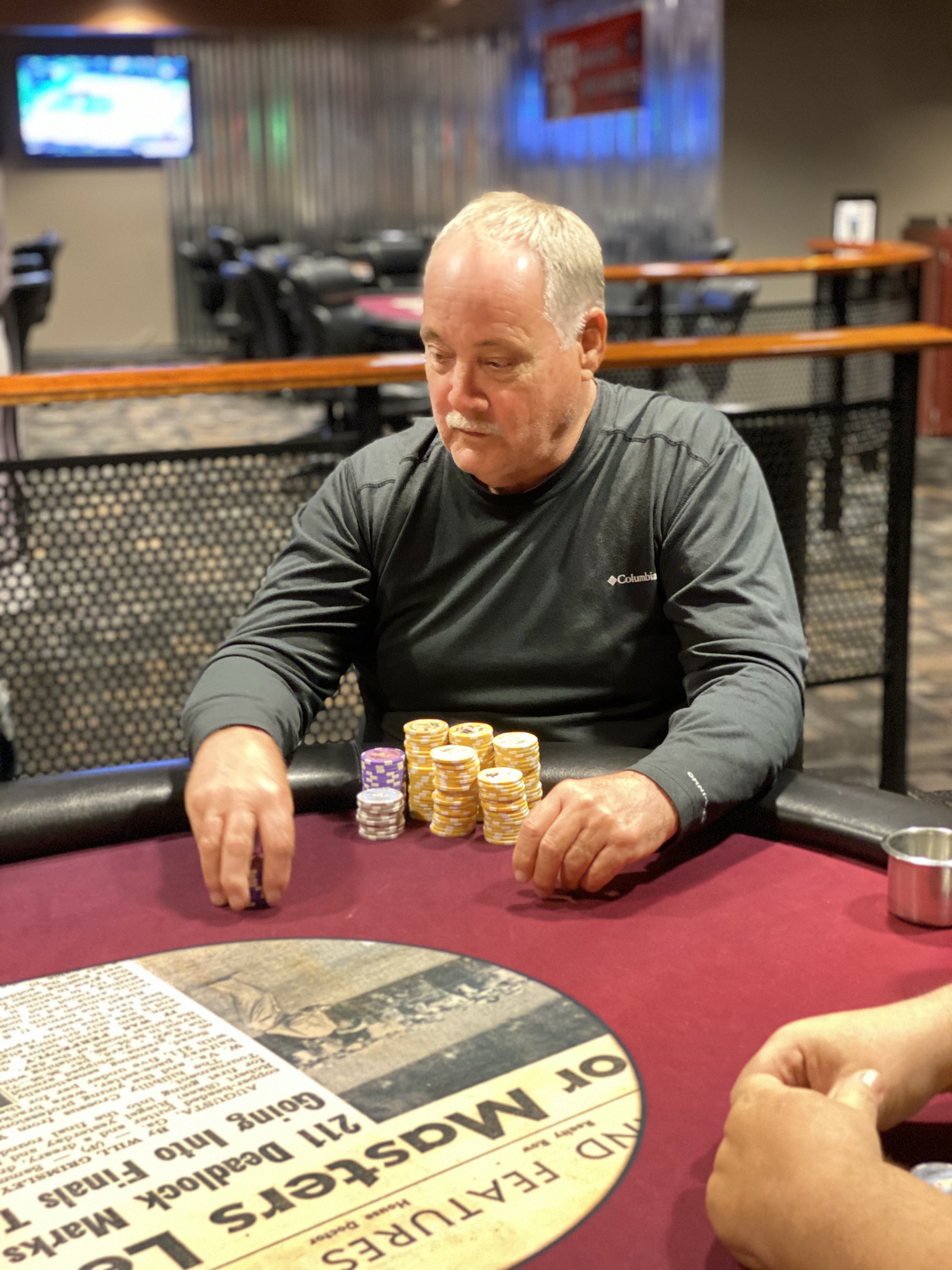 At the feature table in an early hand Dave Bennett sent Doc Brown to the window when his pocket KK bested Doc’s top pair top kicker (Jx). Dave tanked a bit expecting better but the KK held up.

Steve must have arrived late?? Why else would he be at the window?

Dave Bennett A7❤️❤️ > Doc B Q5 all in preflop for the knockout.

Shortly after Ed Sojack was seen doing the walk of shame to the window.

Dave Bennett: “I need to go runner runner to get there but I think I have a shot” to Eric’s 1K bet on the flop. Dave had the best hand without going runner runner.

Dave Bennett was on fire three levels in. 🔥🔥🔥

Right before the break Mark Winchell raised to 800 under the gun. Dave B called. With a J high board Mark’s QQ was good.  Dave was not invincible after all.

The tables combined to two…

Andra Zachow & Ed Vanlandingham chopped Broadway much to Ed’s chagrin.  He had flopped a set of 10s and was counterfeited on the river.

Chrissy Holubeck, substituting for Marv Karlins this week, stayed alive when her 88 faded the spade to best Bill McKown’s 78♠️♠️.  Chrissy was thankful.

Dianna sat down to deal and almost immediately Andra’s pocket threes >Steve AK♦️♦️ when she hit her set.

Because Dianna picks favorites when she deals…

Barry TT>Steve K3 for the knockout!

Then Paul shoved 66 and Andra Zachow, a bit short stacked at that point, called with AT for less and sucked out on the river when she caught her ten!  Paul headed out but was called back to the table when it was realized that he had 4K+ left.

Paul, short stacked from the earlier hand, then doubled with Jacks through Dugg!  So there!!!

But 2nd time was a charm for Dugg…Paul was out 12th and his come back was short lived.

After Andrea Ruosi, the dominating stack most of the night, was knocked out by SuperDave as the points bubble we had our final table!

Chrissy flopped a flush to knock out Bill McKown! He was all in preflop.

Barry KQ>Mark 99 for a double

Mark then got one through when he was all in pre flop and was called by Dave Kaucher who had a top stack.

Dugg and Mark chopped when Mark was all in preflop

Rob gets the triple up when he flops a wheel vs Clive JJ and Chrissy 77!.

Rob’s AQ>Andra QJ for the knockout. 7 of 7 finals tables for Andra this season and still #1 on the leaderboard!

Chrissy QJ> Clive 8T for the knockout in 6th!

Rob was the 5th place finisher

Chrissy was an awesome substitute for the Duckman, Marv Karlins, she finished third!

Dugg was heads up with SuperDave but he couldn’t be beat!