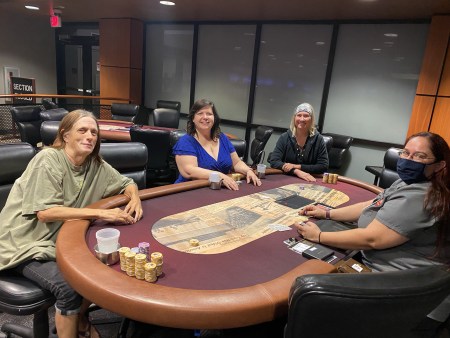 After a less than exciting start, finally we had a big pot at the feature table. Steve Deloache opened 1200 and only Alex Brown, playing for Andrea Ruosi, called. Steve bet 2K on the A high flop, Alex called. A four on the turn changed nothing – or did it? Steve bet 4K & Alex called. The river was an 8 and Steve bet 6k, leaving not much behind, Alex called. The 8 gave Steve a Full house & Alex 2 pair (he had the Ace). Alex was left with about 5K.

A couple of hands later Alex was all in with Andra Zachow shoving her stack behind him “for protection”. It was Alex’s TT<Andra’s AK when there was a K on the flop and it held.

At the outer table Brandon(playing for Wally) K-9 vs Doc Brown.

Brandon Byers, subbing for Wally, doubled through Dugg when he rivered a full house.

Matt Trizis, who should be a soap opera actor, flopped the nut flush when Andra, who opened, flopped two pair with “the romantic hand”. Matt won heaps from Andra’s previously deep stack as he tanked called until then end when he shoved his remaining stack.

Before the break Brandon “Wally” Byers doubled up through Steve Deloache when his KK bested Steve’s 59o (there was a nine on the flop).

After the break Steve Deloache, with about 2500, doubled through Brandon.

Andra flopped a set of sevens and lured all of Derek’s short stack in on the river for the knock out when he rivered two pair Q9.

Down to two tables Dave Miller was all in at the feature table but his hand was no good.

Andra 4 flushed Jason when her 88>Jason’s AA AIPF. It was kind of irritating that she kept yelling “give me a suck out!” but she later explained that it was the only way she could win the hand and she really didn’t want to be out that early and have to stay and watch everyone else for the blog. Reasonable.

Jason was all in but chopped with Chrissy

It was a full double through Brandon for Jason Barnett.

Michael Laake was sent to the rail by Brandon.

At the outer table Brenda’s QUAD QUEENS bested John Gordon’s KK. Ouch! Brenda did declare that she’s lucky with Queens when they both flipped their cards. She was right.

Andra, on fumes, won a monster pot when her 9Tdd>Chris “Jacob” William’s AQo when a nine on the board gave her a pair

Jason Barnett tripled up with a full house vs Andra Zachow and Brandon Byars when he was all in preflop with a short stack. On the flop Andra shoved her A5ss when she caught a piece of it (a 5, not an Ace) and Brandon, who had Andra covered, folded his bigger hand – he had paired the board with a ten.

Andra doubled again & Chris Williams was out! Andra gave Chris credit for her excellent play as she has been studying a bit using his Poker Masterminds PF Advantage App available in the Apple App store and on Google Play. https://pokermasterminds.com/the-preflop-advantage-tournaments/ You may want to check is out!

We had our final table! 4 subs this week and all three ladies (we really need more women in the league!)

Matt got one through…

Andra Zachow sent Matt Trizis to the rail when she called his A9 jam with her AKdd.

Dugg rivered a straight to double up through Brandon who had two pair until the river.

Allen “Ed” Wiseman knocked Isaac out 6th. Allen mentioned that maybe, with all these final tables as a sub, he should have joined the league himself since he has been winning points for others instead.

Brenda made a huge call when Allen Wiseman shoved to knock him out 4th!

And the ladies were the survivors! Brenda had a huge stack by the time we reached the final table and it was going to be hard to get those chips from her. Brenda, who chopped first last week, has been laddering up !

A full double for Andra!

Another full double for Andra 88>Brenda’s A9

A full double for Chrissy through Brenda

And Brenda Worley wins it again! This win moves Brenda into 2nd place behind Jeremy Becker. She is four points behind Jeremy and two points ahead of Ed VanLandingham. With 8 weeks left to play there are 120 points available to win by the end of the season, this means that all of the remaining players still have a chance to win a WSOP Main Event seat- the season is far from being locked up!