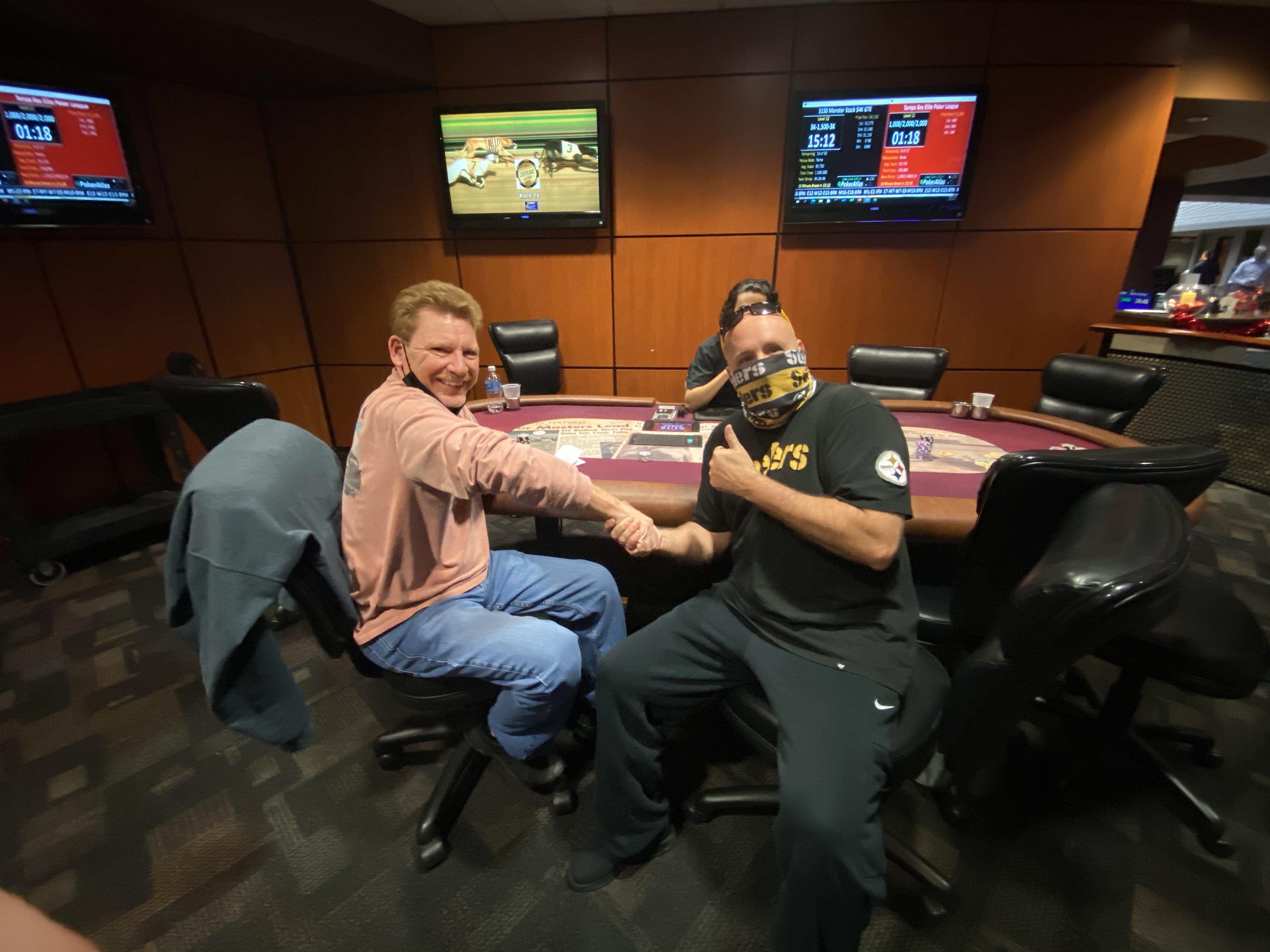 Week five was our final week of registration and we have sixteen players on our roster. With continued attendance we are hoping to have three $10K WSOP Main Event seats to award. Vegas Dave Miller returned (from Vegas) and immediately was running very hot. He knocked two players out at the feature table and was winning every hand.

After shoving when Andra made a big button raise she folded and Jason showed Ako.

Then Jason was at it again. He shoved again this time with 89o for a flopped two pair. Chrissy cursed him and tank folded.

Down to 10 players Steve raised with 5-7ss. Joe Parrish called with AQxx. Flop 4-6-Qxxx. Steve bet. Joe raised. Steve called. River 3. Joe shoved. Steve called and Joe was sent to the rail. Joe is currently 2nd on the season leaderboard so the players breathed a sigh of relief when he did not make the final table this week.

Doc Brown was the final player at two tables to bust and we had our final table!

In a big hand between the big stacks-Vegas Dave & Steve Trizis – chips kept going into the pot in heaps after a lot of posturing and table talk from Steve and Dave countering. It started with Steve betting about 2.5x in early position. It folded around to Dave who defended his big blind blind – literally. He didn’t even look at his cards. The blinds were 500/1000. Steve bet about 4K on a 9 high flop. Dave looked at one card and reraised to 8K. Steve called. Steve bet a pile on the turn and Dave called. The river was check check. Dave showed a 9 (the only card he had looked at) and Steve mucked his hand which he said was 88. Steve went quickly from chip leader to wishing he never played that hand.

Vegas Dave continued to be a luck box when his QJhh bested Jason’s KThh. Jason was all in and the flop with 2 hearts was looking good. When Dave rivered the Jack however Jason’s dreams were crushed and he headed to the rail. Jason chopped with Mark Winchell during week three and currently is in 4th place overall. Jason has won Main Event seats in the league in the past.

Mark was a victim of Steve’s miraculous series of pocket aces. Mark has made every final table this season with two chops for first. Mark intends to win one of the Main Event seats and is well on his way holding 3rd place for the season currently.

With his sixth pair of pocket aces Steve had a monster stack. He was searched to see if he had Aces in his pockets.

Andra, with about 26 big blinds, finally had AA and was under the gun. She decided to be tricky and limp expecting at least Steve to raise the pot as he frequently had. When everyone just called it spelled her demise when Vegas Dave flopped a straight. After some heavy betting on each street Andra called her few remaining chips though she knew deep down her aces were no good. Andra dominated the league during the last two seasons and has had a rough start. This was her first final table but she expects to only go up from here. She also will never limp aces UTG ever ever again.

Lori joined the league at week two and has made every final table so far. She is already arranging hotels and travel to play in the Main Event when she wins her seat.

Chrissy Holubeck, short stacked, was elated to see a K high flop. Her joy was short lived when at showdown Clive’s KJ beat her KT. Chrissy has final tabled 3 of 5 weeks of play so far and her current 6th place standing is only a point or two below those above her.

Steve Trizis was sent to the rail in 3rd place when his KK fell to the flopped two pair of Clive Gavin. Steve was a bit verbose during the night and hearing “six high on the flop” and “Good fold” for the 26th and 47th time respectively was getting a bit on everyone’s nerves, so there was some celebration at his demise. Steve, who had pocket Aces about 6 times at the final table, won last week. with this third place he jumped into 5th overall despite a slow early season start.

After knocking Steve out 3rd Clive and “Vegas” Dave quickly agreed to a chop and everyone was out by 10pm! The win/chop moves Vegas Dave Miller up to third place overall. Clive Gavin, with his first win/chop, moves up to 10th. With 16 weeks left of play everyone has the opportunity to win this season.

The Final table in order of finish was: