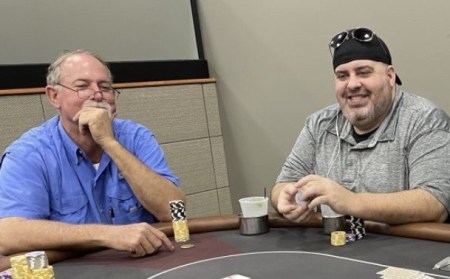 It was still level one when Ryan was all in with TT & Chrissy, playing for Joe Parrish, woke up with Aces sending him to the rail.

Mark Winchell was all in with AKo, Jim Brinkley called…with AK

Andra Zachow was all in with 88 and Marv Karlins called with TT. Marv won and Andra, along with all of her hopes and dreams, was out.

In the next hand Jim’s KQ>Ryan’s K4 to send Ryan home for the second time (the first time he wouldn’t leave).

At the feature table Marv was all in…again. Mark Winchell, short, called with 89dd. With a 9 on the flop Mark doubled.

Marv doubled through Jim Brinkley who briefly had loaned his horseshoe to Marv.

John Gordon opened 4500 and Mark Winchell jammed for less. John rivered the straight and his KH>Mark’s A5.

Austin doubled through JDawg with AA

Tina and Austin chopped up a hand

Dave Bennett tripled up thru Jim Brinkley and Doc Brown
Doc Brown bet Jim out of the hand on the turn which turned into a crucial win for Dave Bennett who was short stacked. Jim would have felted him and instead of 2 points for 8th place Dave Bennett ended up winning and pulling into first place on the leaderboard! The hand was the difference between 1st place and 6th place on the season leaderboard for Dave!!!

JDawg QQ>Chrissy A2
Chrissy out 5th as substitute for Joe Parrish. Chrissy has had an amazing run as a substitute this season!

Dave B AQ > Austin A8
8 on flop Dave rivered a Straight. Austin was out 4th.

In the end it was Dave Bennett over Jim “Horseshoe” Brinkley for the win! Dave, with 107 points pulled ahead of Jacob Naumann into first. Austin is now 2nd on the leaderboard, Jacob Naumann 3rd. Victor Iemolo and Ryan Marin round out the top 5 with one week left to play! There are five more close enough behind Ryan to pull into top five (or tie). Week 20 on May 19th will be a HUGE GAME!!!! Depending on funds there may be a smaller prize for 6 -7 -8th place too which pulls two more players into the mix!