Week 13: Jason Barnett’s aggressive play gets him the win! April Fools on the aggressive part. 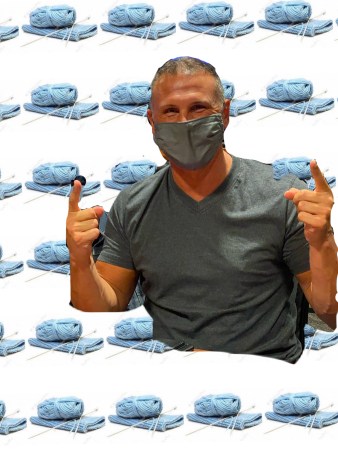 Kenny O’Donnell made an appearance again this week in the league – this time playing for Joe Parrish.

At the feature table Doc Brown’s Aces were cracked when Dave Bennett, playing for GuamDave turned his straight. A couple hands later Andra sent him to the rail.

SuperDave offered up his chips but there were no takers.

In a HUGE hand, Andra thought this might be her comeback week when she tripled up with AA>Chrissy’s KK>>Kenny’s hand.

Unfortunately it was not to be but Andra was back in it after rebuying at the break. Kenny had called her down before break with a flush draw and got there. He claimed Joe would have played it the same way. Andra agreed. That or 77 she figured.

Meanwhile at the outer table Alex doubled through Steve who generally has to call, he can’t help himself.

And SuperDave was out when Jason’s monster was better.

Tina knocked out Kenny with 77 (aka Joe “77” Parrish) and we had our final table!

Andra doubled Andrea Ruosi up when QJdd < K9 because we’re at Derby Lane, a former dog track (get it “Canine”)

Mark’s all in had no callers

Andrea’s KK> Tina’s Qx for a full double up!

Tina rivered the flush for a HUGE pot!

Andra’s QT was no good and Dave Bennett (Substituting for Guam Dave) got the knockout when he played “his favorite hand”. He did warn Andra and said “You’re not going to like this hand but it’s my favorite”! Apparently even if you are ahead you are behind when Dave plays his favorite hand.

Andrea doubled Mark up in the longest final table ever!!!!

Steve was out 7th when Jason’s Ace dominated his hand.

Mark’s Tens full > Dave Bennett aka GuamDave for a double up!

Mark’s AA cracked by Dave Bennett who rivered a Full House and Mark, currently 3rd on the leaderboard was out 6th. It was another of Dave’s favorite hands.

Alex was out 5th, again a Dave Bennett knockout. Alex had lost all but 300 of his stack to Andrea Ruosi when Andrea’s set was better than his two pair. He was all in blind in the knockout hand and Dave’s K5>Alex’s AJ. Ouch.

Tina then doubled through Andrea with pocket Aces! Like we have said before, she ALWAYS HAS IT!!!

Dave Bennett’s good run ended when Tina got the knockout QJhh>A9dd. Dave’s play gave GuamDave 4th place points which is his first decent finish since his early season domination of the leaderboard.

With Tina and Jason heads up Tina raised in the big blind with AKcc. Jason called with 9Tss. The flop was JcTh9c. Tina checked and Jason bet 5K. Tina check raised all in and Jason called. No clubs or Queen on the run out and Jason doubled to 160K.

The very next hand found Tina all in with A9. Jason called with AJ and held. Jason, the most aggressive player of the night finished in first and moved up the leaderboard to 3rd place, 8 points ahead of Mark Winchell and well within reach of first place on the leaderboard, only 8 points separate Jason from 1st place.

With 8 weeks left no players are out of the running in the Elite Tampa Bay Poker league!