2019 Fall League Week 21: We have our winners! Allen, Andra, Jason & Steve (of course) are headed to the WSOP $10K Main Event this summer to represent the TBEPL and Ed Vanlandingham gets a win during the final week! 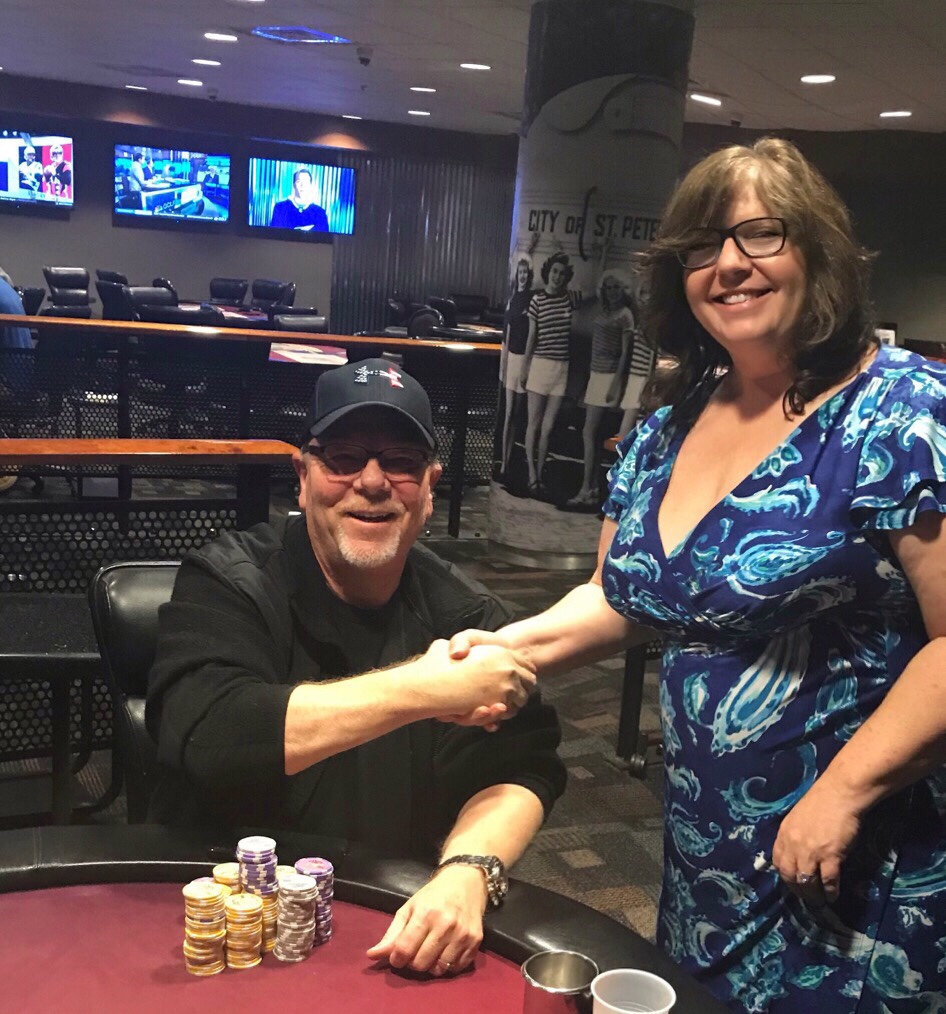 There was tremendous pressure during Week 21!  This was the final week of the league and this week’s finish would determine who would win 3 of the 4 Main Even Seats and  five Minor event seats!  Allen Wiseman locked up his Main Event last week and  Jason, Andra, Clive, Steve, Matt and Rob were all in the mix trying for the remaining three seats.   Andra, Clive and Steve went into week 21 tied for 3rd but with only 2 seats available and Matt close behind and Rob within reach nothing was guaranteed.   To get a Main all needed to final table and Andra needed to finish higher than Steve and Clive due to the “most 1sts” tiebreaker rule.  Rob needed to finish 2nd (roughly) and Matt  needed a final table and 4 more points than the three tied players (or something like that).  There were a lot of factors in play the final week.   Behind these players many players were still vying for the five $2500 minor even packages with many combinations that could get them there.

Steve, Andra and Rob were at the same table to start the night and Steve started out winning about five hands in a row making aggressive moves and showing so so hands.  It seemed to be a ruse to get people to jump into pots with him.    Steve may have engaged in some table talk as well, very rare for him.

Andra’s stack was getting whittled away and nothing was going her way.  She came with two bullets as one rebuy is allowed only up until the first break.  Steve and Clive were prepared as well.  Andra was the first to rebuy and Steve followed after his luck turned around.

Rob & Andrea chopped & Steve went back to the window!  Clive rebought as well and the three tied players were all at the same table.  Andra started building her stack after the 2nd stack dwindled a bit first.  She and Clive did a duet of AC DC’s “Big Balls” when it was determined that she had the biggest balls of them all when it came to her play.

Rob 9T♥️♥️>Andrea to stay alive! Rob needed at least a top 3 this week for a main!

The league took a quick break and celebrated beloved member Chrissy Holubeck’s birthday this past week.  Chrissy is a notable area player and we are all grateful to have her in the league.  Steve Trizis was kind enough to find gluten free cupcakes for her!

Clive and Matt did not survive but were guaranteed $2500 WSOP Minor event packages!

Ed QQ>Andrea K8 for the knockout.  Ed kept building his Monster Stack!  Ed started the season a bit slow in gathering points but really upped his play in the league during the last quarter.  With the turbo structure it takes awhile to get used to the league for some but you see many really up their game!  Ed will be force to be reckoned with next season!

Alan A5 >Ed AA Alan Still alive!  He needed a great finish to get a minor package!

Alan JJ>Mark TJ for the knockout!

Ed rivered a straight to knock out Mark & Ann in one hand!

Gene J8 >Alan KJ for the knockout and to chip Gene up!

Andra AA>Ed K8 to build her stack back up!  She had already guaranteed her $10K Main Event seat but wanted to cash for the week and maybe move ahead of Jason on the season end leaderboard and definitely finish higher than Steve to feed her already too large ego!

Gene doubled up through Ed, he was in no hurry to leave since he had just received his club sandwich and soup.

Ed 88>Gene for the knockout – Gene 3rd which was enough to win a minor event WSOP Package!

Ed doubled Andra up but not enough to compete with his MONSTER stack unless she was very lucky!

Ed gets the win!  With her 2nd place finish this week Andra also took over 2nd place on the season leaderboard!

Check out the Fall 2019 page for the final season standings!

Next Thursday is the end of season freeroll for all qualified players who did not win a WSOP package this season.  All funds for that week will go toward a package plus there are one or two more available (have to tally the funds to know for sure).  Check out the facebook page for continued updates and come out on JANUARY 2 to join the league next season.  Come early to register and go to the “About the league” page for the full details, cost, dates, etc.  Feel free to contact Steve Trizis or Andra Zachow for details or to get on the list!  The Spring season usually has tremendous participation since it leads up to the WSOP!  Generally we have 40-50 players start in the spring and since space is limited we recommend you reserve a spot!