Week 20: One week left and seats are still up in the air! 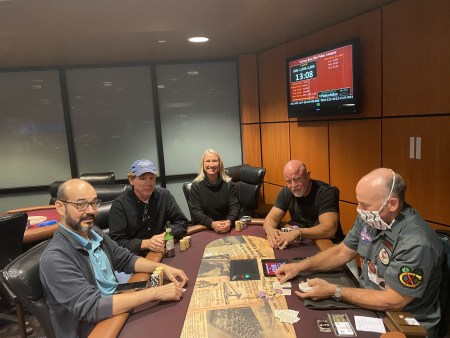 With one week left 5 members are still in the mix for seats and the rest eligible to win through our season end tournament. Four of them- Joe Parrish, Mark Winchell, Jason Barnett and Dave Miller can still win a Main Event seat. Steve Trizis has his locked up!

The 18 week summer session starts June 3rd and we already have a good number of league alumni returning to play. With a very generous substitute policy the league should not interfere with summer travel plans. Check out the “about” page of our website Tampabaypoker.com and the facebook event and let us know if you are ALL IN! The November WSOP Main event could be the biggest ever it has been predicted and qualified league members get 10% of their representative’s winnings!

We had some amazing hands early in the evening.

Clive, unfortunately, got his set of Kings bested by Andra’s set of Aces leaving him short.

A few hands later Joe lost the minimum to Dave’s ROYAL FLUSH! (Which we had to beg him to show).

We had a three way all in, Steve, Andrea Ruosi and Jason. Andrea had a feeling….

…and the Godfather is out!

Joe was the bubble and SuperDave was not far behind in 8th!

OneEyeDave Miller JJ > Andra AK to knock her out 6th

Dave Bennett, substituting for Tina this week, was out in 5th after running well this week. Dave was the “Go to” sub this season filling in for players for unavoidable absences. If there was an award for “winningest sub” it would go to Dave who made final tables for most of his appearances. Unfortunately, for those of you looking for summer substitutes (you are allowed 9 due to the busy time of year this summer session) Dave will be a playing member this summer. We may all be in trouble…

John “Muscles” Gordon finished 4th this week and he’s been running well, but with only one week left this season the top four spots are out of reach.

‘Ole One-Eye Dave Miller, who, along with SuperDave Kaucher, was within reach of a Main Event seat going into this week finished 3rd keeping him in the mix. OOE Dave now has 97 points keeping him in 5th place 6 points behind Mark Winchell and 7 points behind Jason Barnett. If they don’t perform well next week and he does he could take the # 3 seat away from them.

In the end it was a heads up battle between Andrea Ruosi and Chrissy Holubeck.

During the action Andrea shared this information with our TBEPL blogger “I had 2-4 off, she had 55, we play a big hand, many overs, a four, at the end she asks “do you have anything at all there”, I show the 4, she then shows the 55 in her hand saying “Oh, I win!!”. She is now trying to convince me it wasn’t a slowroll.” He also shared this “Won, Chrissy second, no chop, played wonderful HU. She plays head up MUUUCH better than John and Don Brown who I also beat HU 😆😆😆”