Week 15: Chrissy gets the win! 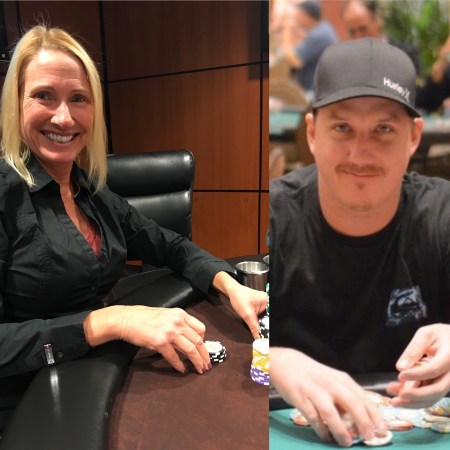 We had numerous subs again for week 15.

After this week we have three more weeks and most of the players, if they play their cards right (and others play their cards wrong), have a chance to win a Main Even seat! This week Chrissy Holubeck, subbing for Dave Bennett, got the win, moving Dave up the leaderboard a bit. Brenda is still first on the leaderboard and Jeremy second but there are quite a few close behind!

Michael Laake’s QQ was best when Marv, back from a prolonged absence, shoved his A7 on a board that had a 7 on it.

It was Matt Trizis’ 30th birthday and Chrissy brought delicious cupcakes! Seriously delicious! His parents Bonnie and Steve Trizis were away on a cruise so they had a nice Italian dinner to celebrate.

Jacob called Andra’s AIPF with QQ and Andra’s TT was no good. The blog may be short.

Down to two tables.

Mark Bud Wiser out 7th
All in with QQs utg
Tony Pellegrini playing for Andrea Ruosi in BB called with K7 off. He caught a K

Big hand that crippled Dugg
He raised, Chrissy shoved, he called, Chrissy had pocket kings he had ace king

In other news Jeremy Becker is using the skills he has learned in his first season of the Elite Tampa Bay Poker League to parlay into a big win at the Hard Rock in Tampa! I’m sure he is grateful for us.