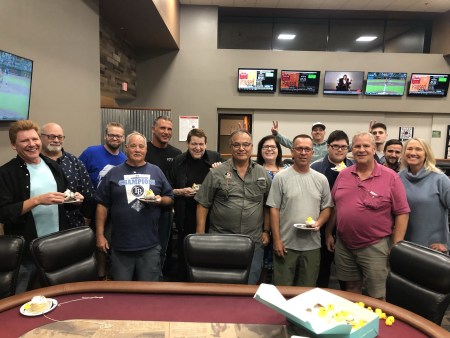 After some early wins by Steve Trizis, who said he’d won every hand he played (Even beating Andra Zachow’s K9♣︎♣︎ with T4dd when she flopped ♣︎♣︎)(obviously she played it wrong), he declared that he couldn’t lose. This was all during level one and before the cocktail waitress arrived.

Andra then won her chips back when Derek Worley 3 bet her over pot raise on the flop by pushing his stack in. Andra called with KK, the best hand to chip up early.

Andra, in 8th place on the leaderboard, needed to not only win this week, she slso needed Andrea Ruosi, Ginger Dave Miller & SuperDave Kaucher to all miss the final table for her to win another Main Event seat.

Derek lost heaps to Andra then Steve took them.

At 100/200 Andra raised to 700. Derek called and Michael Laake raised to 2500. Andra pushed in her stack of less than 10k but more than Michael’s stack saying she could always rebuy. He tank called with KJo. Andra had 99 and it held.

By the way, here’s an interesting article you may want to check out…

At the outer table Marv & Jason Barnett were all in. Jason’s A was good for the knockout. It was ok because Marv was hitting the road Friday along with his new bestie Mark Wiser. They are headed to Vegas and needed their rest.

At 400/800 Andra opened 1800, Ed & Matt Trizis-the bb, called. The flop was meh and everyone checked. An A on the turn was the 3rd diamond on the board. Andra bet 3K, Ed raised to 6K+ and Matt, who had less than that shoved. Ed had AK♥︎♥︎, Matt flopped two pair. Andra had folded AJ♠︎♠︎ but noone cares what she folded. Matt won heaps.

GingerDave Miller raised to about 6K and Matt shoved. Dave, who needed to final table well this week to win a Main Event seat tank folded leaving himself about 6K.

GingerDave was all in but no callers.

Mark Winchell was all in and Jeremy Becker woke up with AA. Mark was out 9th.

Jacob naumann was all in and Matt called. Jacob held. Jacob was in the mix still trying to get a Main Event seat.

GingerDave was all in with AK and doubled through Matt. Matt was out 8th.

SuperDave Kaucher was out 7th vs Jeremy, losing his opportunity for a Main Event seat.

Andra was out 6th, losing her opportunity for a 2nd Main Event seat.

GingerDave Miller will also be representing the league this November in the WSOP Main Event with his 4th place finish!

With three left, 2 had locked up Main Event seats-Jeremy Becker who topped the leaderboard for a good part of the seasonband finished at the top, Ed VanLandingham who was now going to also represent the league in the WSOP Main Event, and Steve Trizis, playing for Mark Wiser. No Main Event seat this time for Steve/Mark, but Steve had already won two going into November’s WSOP-one Fall 2019 & one this past spring. Steve Trizis has represented the league in most if not all WSOP Main Events since he joined the league and has cashed the Main twice.

Steve, feeling a bit sorry for the remaining two players suggested a chop so that everyone could get some rest, especially Jeremy who was headed to Vegas in the morning (presumably to beat his BFFs, Mark Wiser & The Duckman there so he could help them settle in after their long drive.)