Week 1: Trey comes out of retirement! 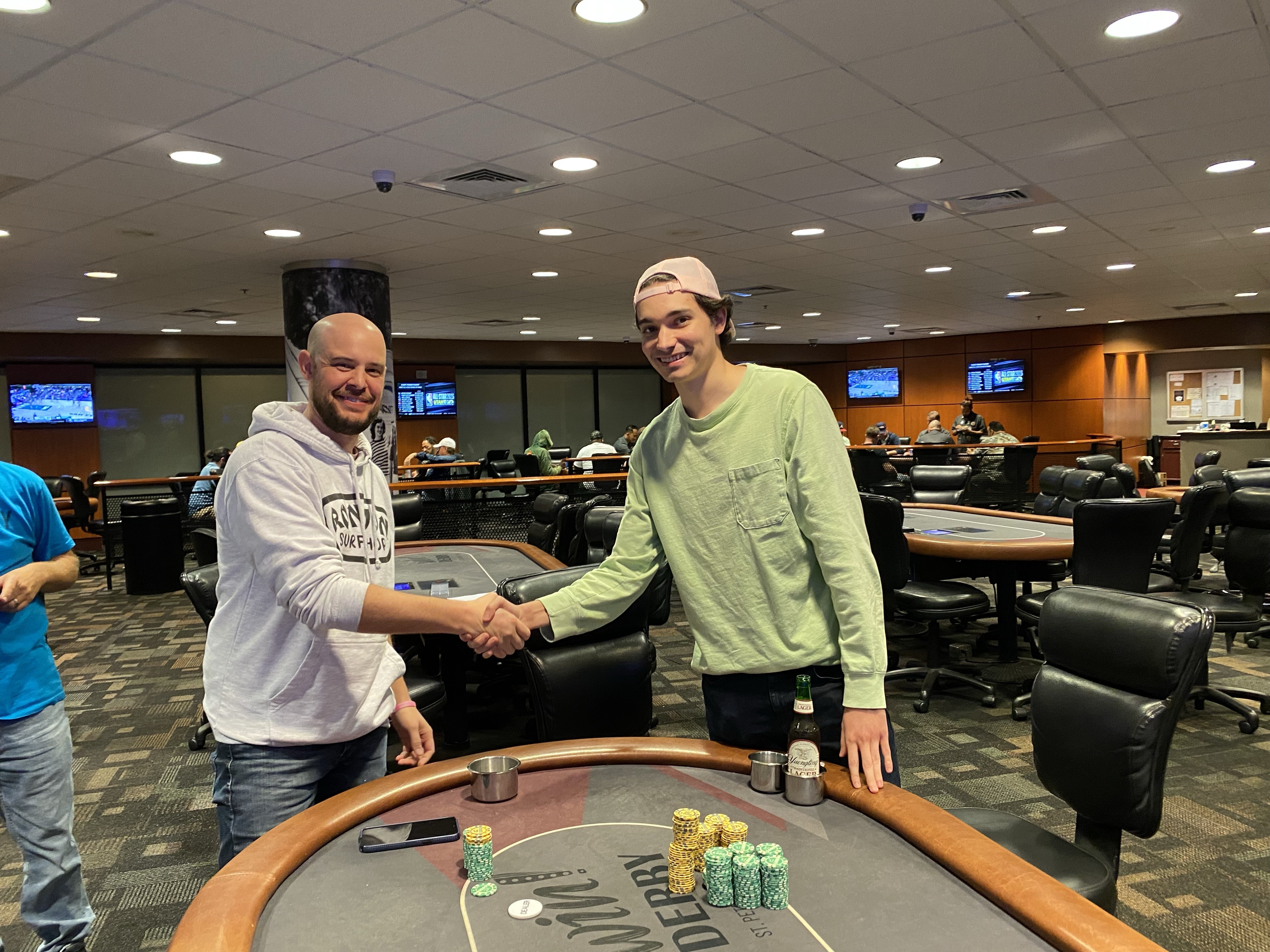 We had a lot of new faces and some past seasons’ alumni who had skipped a few seasons play week 1 of the Elite Tampa Bay Poker League along with many who play every season. Thank you to Marsha Wolak who strong armed quite a few friends to give it a try! We appreciate her sharing these wonderful pictures!

Registration is open through January 26th but don’t wait to join as you must play or have a substitute 17 of the 20 week season and there is a point each week for attendance in addition to the final table points. We also could reach capacity prior to the 26th so reserve your spot if you have not already.

Walt Rossi and Craig had the same hand – until the river for max pain for Walt.

Down to three tables we had a new feature table courtesy (Andra’s husband Mark took over and she went over to the dark side to play the $30 tournament).

George Imes KQ> GingerDave Miller 66
Dave out. Dave thought he wasn’t playing this season but was close by playing cash and was lured in.

Trey Harrell won the league about 4 years ago and cashed the WSOP Main Event for more than $30K for the League! Following are some news stories about it. Trey’s Mom, Marie Harrell is playing this season as well. Marie has over $100K of live tournament cashes!

In a contentious hand, the dealer put out the flop prior to the big blind, Clayton Phelps, getting his option. He slid his stack out all in just as the flop came out – it was A high but Clayton was pushing his stack before he saw the flop-it was pretty much simultaneous we believe. What we think happened-it was confusing on the timing-Craig shipped his chips when he saw the A high flop and when he looked to Clayton and saw his chips over the line he thought action was complete and flipped over his hand. In the end the floor decision was to reshuffle the deck due to the premature flop and skipping the part where you give the bb the option (dealer did it fast, not time for Clayton to protest). Craig was given the option, knowing there would be a new flop, to keep his all in. The bb preflop shove stood with Clayton knowing what Craig had and Craig not knowing what Clayton had. Craig also could fold. Craig did go all in and Clayton had Q2o. The new board didn’t have an A and a 2 came out so Clayton’s Q2>Craig’s A9. Craig was out 4th.

Lots of wrong things in the hand but it boiled down to dealer error though Clayton seeing Craig’s hand was a big issue to Craig for sure. If Craig, who had the better hand preflop, had won the hand it most likely would not have been as big an issue, but he didn’t.

In the end, based on TDA rules, the ruling was correct, but it isn’t always a perfect situation for sure.

Thang Phu was out 3rd

Trey and Clayton chopped the money and Trey took 1st and Clayton was 2nd. The top four places were paid from the weekly prize pool with over $1K to 1st & close to that for 2nd so chopping the winnings would be more than $1K each.

Though it’s only week one, Trey seems to have what it takes to win a WSOP Main Event seat this season.