Week 9: Subs Subs Everywhere! But they didn’t win. A chop for Brenda & Dave! 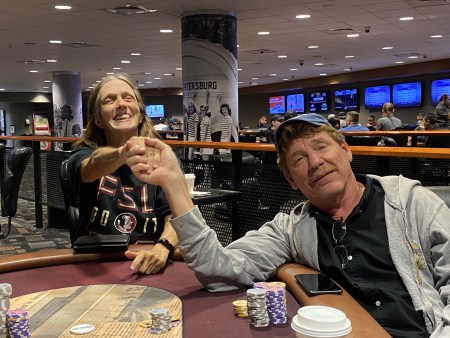 We had quite a few players traveling this week, but due to our generous summer session sub policy it was not an issue.

After a slow start to the super aggressive play that we are used to seeing (usually one or two players are rebuying in level one or two), At the feature table, 100/200, Brenda raised to 600, Jordan Joeckel & Jeff Gordon called. The flop was three diamonds. Brenda bet, Jordan raised to 3500 & Jeff shoved. Brenda folded (TT), Jordan called. Jeff’s flush was good and Jordan was sent to the rail. This is Jordan’s first rebuy of the season & first last longer. This confirms: The last longer is bad luck. Maybe.

Allen Wiseman, playing for Andrea Ruosi, bested “Not that” Jeff Gordon’s flush with a slightly higher one for heaps.

Andra Zachow, down to 5 bb was all in with 88 after SuperDave 3 bet Brenda. Brenda called and in the end Andra tripled to stay alive.

Jordan said “I’ll just give you my chips and go home, I’ve been gone for days and ready to leave”. Steve Deloache didn’t believe him.

Brenda rivered an A to beat Michael Laake’s flush with a full house.

Jordan Joeckel busted Andra, who raised all in 4500 with 44.

Brenda sent SuperDave home. She might be the wall this week! With Andrea Ruosi traveling both Michael Laake and Brenda have had walls comparable to the famous “Ruosi Wall” as it is now known as.

Chrissy, subbing for the Duckman, was out 9th this week. Chrissy will be back next week subbing for Dave Miller.

We have 5 substitutes at the final table this week for members who traveled down to Hollywood for the Hard Rock Poker open.

Brenda knocked Jason Barnett out 6th sending the Bronze God to the rail. He was happy to not be there too late, he had plans to lay out Friday in the Sun.

Chris Williams, playing for Jacob Naumann was out 5th!

Jeff Gordon was out 4th

This hand was a chop for Dave Miller & Alex AQ=AQ

Dave Miller doubled through Alex Brown with AA. Alex, subbing for Andrea, was attempting to have a “Ruosi Wall”.

Alex doubled through Brenda with a full house.

Brenda doubled through Alex with 79dd>55 AIPF. Earlier she told Dave & Alex she’d only shove/call a shove with AT or better or a pair. Apparently that was a ruse.

And Brenda doubled through Alex again!

….and Alex doubled through Dave Miller. It was like the movie Groundhog Day.

And Alex was finally out in 3rd.

Dave Miller doubled through Brenda for a huge stack!

Brenda, very short, was all in with 78o. Dave called blind (no pun intended) and woke up with AT. Brenda flopped a straight to double up.

After Brenda doubled through Dave again, they agreed to chop first place. Dave had been up for four days.