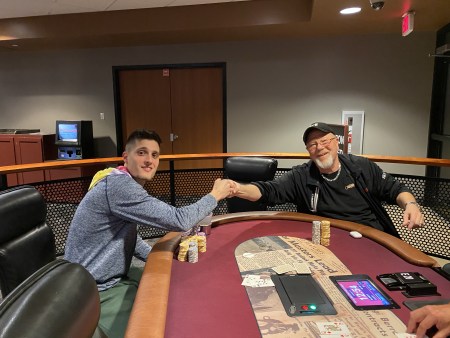 All the cool kids were here this week for the start of the NEW FIRST TIME EVER summer league! New members, old members and area notables all came out to play! We have 31 players currently with a few more planning to start next week.

During level one we already saw a couple of shoves including this beauty when Gino’s K8>Herb’s AA. One word “variance”

Herb was finished off when he had two calls, Dugg and Mark Winchell both with flush draws. Mark bested both of them with the nut flush.

Steve Trizis > Gino to double up

Andrea’s QQ>Gino’s 44 for the knockout after a scary turn.

Dugg was out when Ed had the nuts

John’s JJ was good and Derek was out

Ed’s 44 was good and Chrissy was out. Fortunately she’s not one to hold a grudge and after her strong play last season she’s going to be a force to be reckoned with this season. All of the ladies are. With two more weeks of registration we’re hoping to get some more ladies in the league, it’s not too late to join!

New member Mark Mahler chipped up before the 2nd break. He had a big double when Andra bet 10k into a multi-limp pot and he shoved 44. He held against her AQo. Since he’s new he thought she was just stealing the pot but Andra doesn’t do that.

Ed’sTT>Mark Mahler’s AQ for a double

Notable local player Marv “the Duckman” Karlins was out 14th. Marv along with John “Muscles” Gordon have both been featured on WPT televised final tables.

John “Muscles” Gordon’s quad 9s was good to knock out Mark Mahler. John was building quite a wall of chips all night!

Jason’s QQ>Andra’s 99 to knock her out. What was she thinking?

Jeff Gordon >John Gordon. No not THAT Jeff Gordon.

Ed Vanlandingham caught a 5 to knock out Mark Winchell

Jeremy QQ>John Gordon AK for a HUGE double up! Jeremy flatted his pocket Queens and flopped the set. Jeremy then flatted John’s large flop bet and when John put Jeremy all in on the turn he found out he was drawing dead.

John Gordon was out 3rd after losing a big chunk of his stack to Jeremy’s trickery earlier.

But in the end Ed couldn’t come close to Jeremy’s wall of chips and it was Jeremy on top!

To get blog updates you can register your email on this site.

Summer league registration is still open for a few more weeks- contact Steve Trizis or just show up Thursday a little before 6:30. For details go to http://www.tampabaypoker.com/about