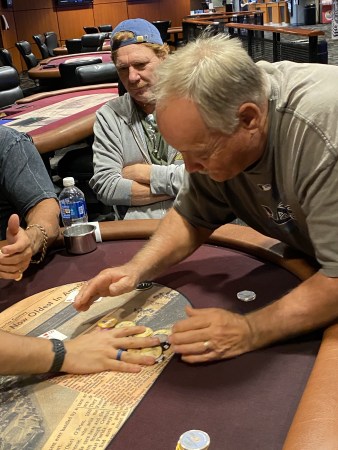 GuamDave Miller aka VegasDave aka OneEyedDave made it back from Guam after a long absence and substitutes making him look good. Strve Trizis and Mark had a long conversation about his return which Steve so graciously shared with Dave;

Some other remarks to Steve from Mark Winchell. “I’m sorry I called Dave Miller stupid, I thought he already knew”

Mark Winchell “did you ever look at someone and think Dickhead”

Mark Winchell. “There are 2 sides to every story, but Dave Miller is a dog in both of them.”

HUGE HAND: Early in level 2 Mark raised to 500, 2 calls from Doc Brown & Steve and Andra reraised to 1200. Mark folded and 2 callers and the flop was KQ8. It checked to Andra who bet again , 2 calls. Everyone checked the turn and the river was a K. Doc checked and Steve bet 3kish or so. Andra jammed and after tanking Doc and Steve folded each of their Kings. Andra had QQ for a FH.

Doc TT>Andrea’s 22. Andra told Andrea that the reason she always writes his full name in the blog is so noone will mistake him for her and think she plays that bad.

Andra raised preflop and had 3 calls. On the Qx5c8x rainbow flop Andra bet pretty big and only Doc called leaving a couple of thousand chips behind. Mark even folded a Q rag hand. On the turn Andra put Doc all in and he said, I guess I’ll have to call. Everyone looked in amazement as Andra’s T8cc was good.

SuperDave Kaucher, who has finished in the top 3 four out of the last 5 weeks, doubled up.

John knocked out OneEyedDave in 6th with an 8 high flush

John is all in and Chrissy has queens…

She folded, he didn’t show… She put him on Aces.

Steve was all in but no callers