Week 16: World Renowned Poker Player got his start in the TBEPL! 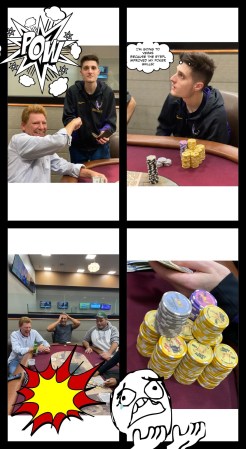 Week 16 found local celebrity Jeremy Becker, fresh off of a HUGE win in the latest SHRTP series, on top of the leaderboard after chopping with Ginger Dave Miller who has moved into 5th place this season.

We had several subs again this week keeping us consistently at 22-24 buy ins per week at this point and 5 Main Event seats already. We had Mike Beattie subbing for Michael Laake, Alex Brown subbing for Andrea Ruosi, and Chrissy Holubeck for Matt Trizis.

The night started with some early knockouts and plenty of straights winning pots.

At the feature table, Dave Miller was all in on the river with a straight taking most of Mike Beattie’s stack.

Shortly after, Dave took the rest of his chips.

Marv “The Duckman” Karlins raised and Andra shoved. Marv called saying it may be a short night. Andra had the straight for the win to double up. Marv, using sign language, said “Andra can only go up from here” pointing to the roof of the poker room.

In the next hand Marv was out.

Doc Brown was all in and was good until Jason hit his Ace on the river.

SuperDave Kaucher was all in on the flop and Dave Bennett took a chance and called, open ended, with 77. SuperDave’s straight was good for a double up.

Dave Bennett was all in with his last two hundred and three callers. SuperDave finished him off and we were down to 14 players.

Then Dave Miller rivered a flush with J2♦︎♦︎ against Andra’s KT. Andra had shoved less than ten bigs on the flop and Dave called. Andra stormed out, knocking her chair over, with some money she had been holding for Dave. She shouted “I’ll see you at the tables”! Women get a bit emotional.

Jeremy knocked Ed VanLandingham out. Ed still has a solid spot in the top five so far this season.

SuperDave faded the flush to knock Brenda out.

At the outer table Jeff Gordon doubled through Jacob Naumann.

Jason won his hand and then SuperDave lost, when Jeremy rivered the straight, to bubble the final table.

We had our final table! (Bud is visible in one pic & Jacob in the other.)

With a MONSTER pot at stake, Dave’s QQ bested Chrissy’s JJ & Jeremy’s pair of Tens. Chrissy, playing for Matt Trizis was OUT 9th!

Jason got one through and showed AK after Jacob tank folded.

Mark Winchell doubled through Dave Miller when he hit a straight.

Jeff Gordon was big blind with 200 behind. Ginger Dave put him all in and Jeff called with KJ♦︎♦︎. It was one of those oooooh, OooooooH, OOOOOOOH hands when Dave hit tend but Jeff got his Jack to win the pot.

Ginger Dave Miller got the knockout and Jason, who actually coined the term “Ginger Dave” was out 7th.

Jeff Gordon, short, bested Mark Bud Rat Bastard Wiser 77>AA. He did the lucky “stand up like you are leaving” move and it worked even though he didn’t also sling a backpack over his shoulder.

Bud was all in with A2o and Jeremy called…. With A2o.

Dave found a fold and Jeremy scooped. HUGE pot! Only now is Jeremy’s hand being exposed for the world to see.

Jeff Gordon was all in and Dave called only looking at one card-a king. Dave’s other car was a 2 which gave him a pair.

At 1k/2k Mark Winchell raised 4500 with KQ♣︎♣︎. Bud Wiser shoved all in and Jacob also shoved for a bit more. Jeremy, with a big stack called too. Mark Winchell mucked his hand and we saw the flop. Bud was ahead until Jacob got his straight and Bud was out.

Mark Winchell’s 77 were good and he doubled through Jeremy.

In the end it was a chop between Ginger Dave Miller and Jeremy “the champ” Becker. With this win, Jeremy pulled ahead of Brenda to 1st place on the season leaderboard.

At this point Jeremy Becker and Brenda Worley have locked up two seats but a majority of the league members are still in the running for the other three seats. Those who don’t win a seat will play in a losers lounge freeroll that’s not free on October 1 for a few more more smaller seat entries (how many TBT based on participation). Players must play 15 of 18 weeks and three of the last five weeks to play the free roll as well as to participate in the league’s 10% share of any winnings of players who win seats.