Week 3: League to John Gordon “If you bring that cake we’ll let you win every week.” 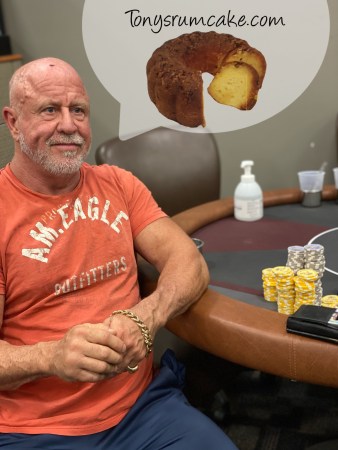 Very early in the evening Darryl Woodruff was all in on the river for not a whole lot and Dugg paid him off.

Week 3 of the Elite Tampa Bay Poker League is complete and we have a new name topping the season leaderboard: Tina Pridgen! John Gordon won the week but with three weeks of final tables (the only person in the league to have three final tables so far), Tina has moved up to the top spot. We had a couple substitutes this week with Chris Williams, the developer of the highly regarded Poker Masterminds “Preflop Advantage” App, playing for Jacob Naumann who is down in Hollywood at the Hard Rock Hollywood ‘s Lucky hearts Poker Open playing the WPT Main Event and Chrissy Holubeck playing for Jason Barnett. We had a new member this final week of registration when John Iemolo joined us.

Muscles then knocked new John, John Iemolo, out when his
JJ>33

Jim Collins JJ> Ed VanLandingham’s KT and Ed was out for good (for the evening).

Double up for Rob Benford when his QQ bested Doc Brown’s KJ.

Ryan Marin was all in and Tina found a fold.

Matt knocked Darryl out with a almost but not quite shitty-ish hand when he called with suited connectors.

Ryan A6> John Iemolo AK all in preflop

Austin Fowler was all in, John tank folded

Tina AK> Ryan QQ
Ryan limp Jammed after Tina’s raise and she tank called it off. Ryan was left with 1200 and missed the final table for the first time this season. He came into this week in first place.

We had our Final table!

Mark Winchell was the 9th place finisher this week, his second final table this season.

Dave sucked out on the river when his QJ hit the T on the river for a straight! Dave has a habit of being very difficult to knock out. He says its skill.

Austin was all in but no callers

Matt>GingerDave but Dave had him covered and was not knocked out!

Austin, second guessing himself, and knowing GingerDave didn’t even look at his cards, still folded like a p***y.

In another hand Marv “the Duckman” Karlins bet BIG (he does that sometimes). Tina called and was all in with 33. She flopped a three for a full double up!

Andra Zachow was getting short and was all in with A9hh and Matt McGinnis called with AKo. The board ran out with two pairs and they chopped the hand, Andra living to see another hand.

Soon GingerDave was all in again. Tina asked for a count. She folded and he showed TT

The final table was 8 handed for about an hour with chips being passed around. Andra was the 8th place finisher. The Duckman, in an odd twist, knocked Joe Parrish out 7th when his 55>Joe’s 22.

Austin was all in and John Gordon called 30K and Tina called as well. The flop was 6c8c2d and Tina bet 30K. John grimaced and folded and Tina flipped over Ac6d for a back door flush draw and middle pair and Austin tabled 79ss for an open ended straight draw. John was a bit irritated that he would have had the best hand chastising Tina a bit since this was already the longest final table ever (in the league).

John’s TT>GingerDave’s 77 for, FINALLY, the knockout.

Tina was all in with QTdd and flopped QQ to double up through Muscles.

Then Austin was all in blind and won when his 2 paired the board. Austin was the new GingerDave……he could not be busted!

Austin, who at one point was down to roughly a big blind, knocked Tina out 4th. With the 4th place points this week Tina has vaulted up to 1st place on the season leaderboard!

Then Austin doubled through John Gordon.

In a miracle hand John Gordon’s 22 held against the Duckman. John’s Full house was best and Marv was out. Marv is interviewing other suits to represent instead of 22 after two bad beats. He is famous for his 22 play. Marv was out 3rd. Down to two players John was not ready to chop.

In the end it was John Gordon who finished in first place this week with Austin Fowler 2nd.

By the way, If anyone is interested in Chris William’s App which was mentioned in the beginning of the blog, check out his website! https://pokermasterminds.com/the-preflop-advantage-tournaments/ Support your local businesses!