Week 1 is on the books and Jacob Naumann tops the Leaderboard! 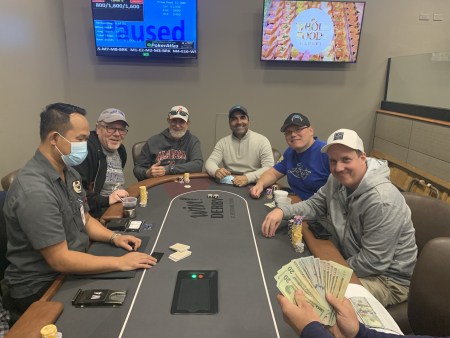 The first night of the league found new players and old battling behind the privacy glass in the Derby Lane poker room. Only the most Elite players get to play in that area so it makes sense that the league is held there. Chrissy Holubeck was kind enough to substitute for Andra Zachow who was under the weather a bit Thursday. We’d love to see more ladies join the league and represent! Steve Trizis claims to have retired as it’s boring to win every year. We’ll miss hearing his requests for a six high flop…. We’ll also miss Andrea Ruosi whose unconventional play was always a pleasure. Andrea has moved to Italy and looks forward to running into members if they travel to the European poker tour.

We welcomed five new players this season who have never played in the league. Three of them made the final table this week and, to quote one of them “Watch out!”. We won’t say which one.

Tina “always has it” Pridgen was back after taking a season off, and in an early hand her turned set of tens bested Dugg Hadden’s flopped two pair for a huge pot foreshadowing the rest of the evening. The players had forgotten, since it’s been awhile, that Tina always has it.

Victor Iemolo, who joined the league this season after years of Steve Trizis hounding him to join, won a nice hand beating both of the Docs (Brown and Karlins). Ironically, Steve retired from the league when Victor joined. Coincidence? Victor had a deep run in the 2015 WSOP Main Event cashing in the top 5% of 6,420 players, the year Joseph McKeehen won. He has 6 other WSOP cashes not including some circuit cashes as well. He is a welcome addition to the league!

Dugg lost another big one when Victor’s set of fours bested Dugg’s QQ.

Ryan Marin was all in with aces and they held against Victor and Doug. Ryan is a recent transplant from Illinois and had a deep run in a WSOP circuit event at the Horseshoe Casino in Hammond. The WSOP Main Event is on his bucket list and he plans on winning his Main Event entry this season in the league.

Down to 10 players, Ed Vanlandingham, who played the Main Event this past year for the league, bested Victor’s two pair with a set of eights.

Victor turned things around on Ed when his 33 bested Ed’s AK!

With 10 left GingerDave Miller was very short and the rest of the players were itching to knock him out. He, however, did not go easily. First Victor left him on fumes, but he then quadrupled up. Then He doubled through Tina.

Finally Mark “Me” Winchell got the knockout and we had our final table. The bounties on Dave’s head may have helped?

Down to 9 players we had our final table and Jacob had a bit of a wall forming in front of him. The league rules have solidified and we will have a 9 handed final table all season. Below are the points each place receives.

Matt McGinnis was our 9th place finisher this week.

Victor was our 8th place finisher when Ed Vanlandingham’s QQ was best. Jake lost some chips as well with his AThh.

Ryan’s AK gave him a double through Jacob!

Rob Benford found a double through Tina, who, just this once, didn’t have it.

With week one wrapped up we have about 25 players signed up (a few starting next week) but there is room for more and two more weeks of registration. If you would like to join the league show up next Thursday, January 14th a little before 6:30 to sign up. Go to http://www.Tampabaypoker.com/about for full details. Last season we gave away 5 Main Event seats plus several Minor Event Seats.