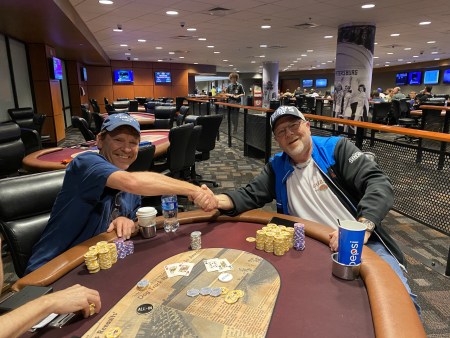 Way too early (100/200) at the outer table three were all in and Doc Brown said, in his Doc Brown accent, “I’m finally at the good end of one of these” sending both Jason Barnett & Marv “The Duckman” to the rail.

Back at the feature table Jordan Joeckel was all in and held against week 7 winner Michael Laake.

Michael, now on fumes, was out when “Not that” Jeff Gordon had the best hand.

Alex Brown, playing for Andrea Ruosi, was all in right before the break…

Kenny O’Donnell, subbing for Matt Trizis this week, had his food delivered & punted off his chips. He was hangry. Matt’s going to be very disappointed and he might not be invited back.

After complaining for the last hour about not getting any hands “Not that” Jeff Gordon, aka the unibomber, was all in against Steve Deloache who had flopped a set of kings. Jeff’s AQ was good and painful to Deloache, who was out shortly after sitting down at the feature table.

Jordan Joeckel’s KK bested Mark Winchell’s AQ for the knockout. Mark was short after an earlier hand with Kenny where he flopped two pair but Kenny turned a set of kings (allegedly) and Mark had to fold.

In a battle of some decent sized stacks, Jordan Joeckel was out when “Not that” Jeff Gordon’s AQ flushed his 66 on the river.

Alex Brown’s AA was good when Derek Worley called his all in with 99. Oops.

Andra Zachow doubled when “Not that” Jeff Gordon shoved into her Aces with QQ. Not too much earlier they had been in another big hand with the same hands and Andra had won that one too. She was running good this week.

Last week’s winner, Michael Laake, was out after he couldn’t get any traction.

Right before the break Wally Maddah was out when John Gordon’s 88 was good.

SuperDave Kaucher was all in on fumes and doubled through Pirate Dave Miller to stay alive!

Not this time. SuperDave was out when John Gordon’s A9 was good.

In a MONSTER hand at the feature table Andra Zachow 3 bet to 10K and had 3 calls. She flopped a set of tens and shoved when the board also had 2 clubs. Only Alex Brown called with a flush draw. He rivered the flush but Andra had already turned a full house. She didn’t realize that she won until the other players told her. She’s a little slow. She was building a wall.

Andra knocked John Gordon, who was short on chips, out 9th. He shoved A5o and told Andra she had KQ. Andra called with her heaps and did have KQ. The Q on the board gave her the best hand.

Doc Brown was out 8th

But no luck on his next preflop shove. Mark Wiser was out 7th and “Not that” Jeff Gordon improved his stack quite a bit.

Dave Miller doubled through Bob Scholz when he called for an A and it came! Bob, who had JJ, lamented that he forgot to call for a J.

Jeremy Becker was out 5th solidifying his top place on the leaderboard with another final table appearance.

Andra let Ed get to the river and he hit his flush while she hit 2 pair with A8. Andra was out 3rd.

Huge double up for Ed VanLandingham!

….After Dave Miller doubled Ed VanLandingham and Dave Miller chopped! They are older folks & it was getting late.