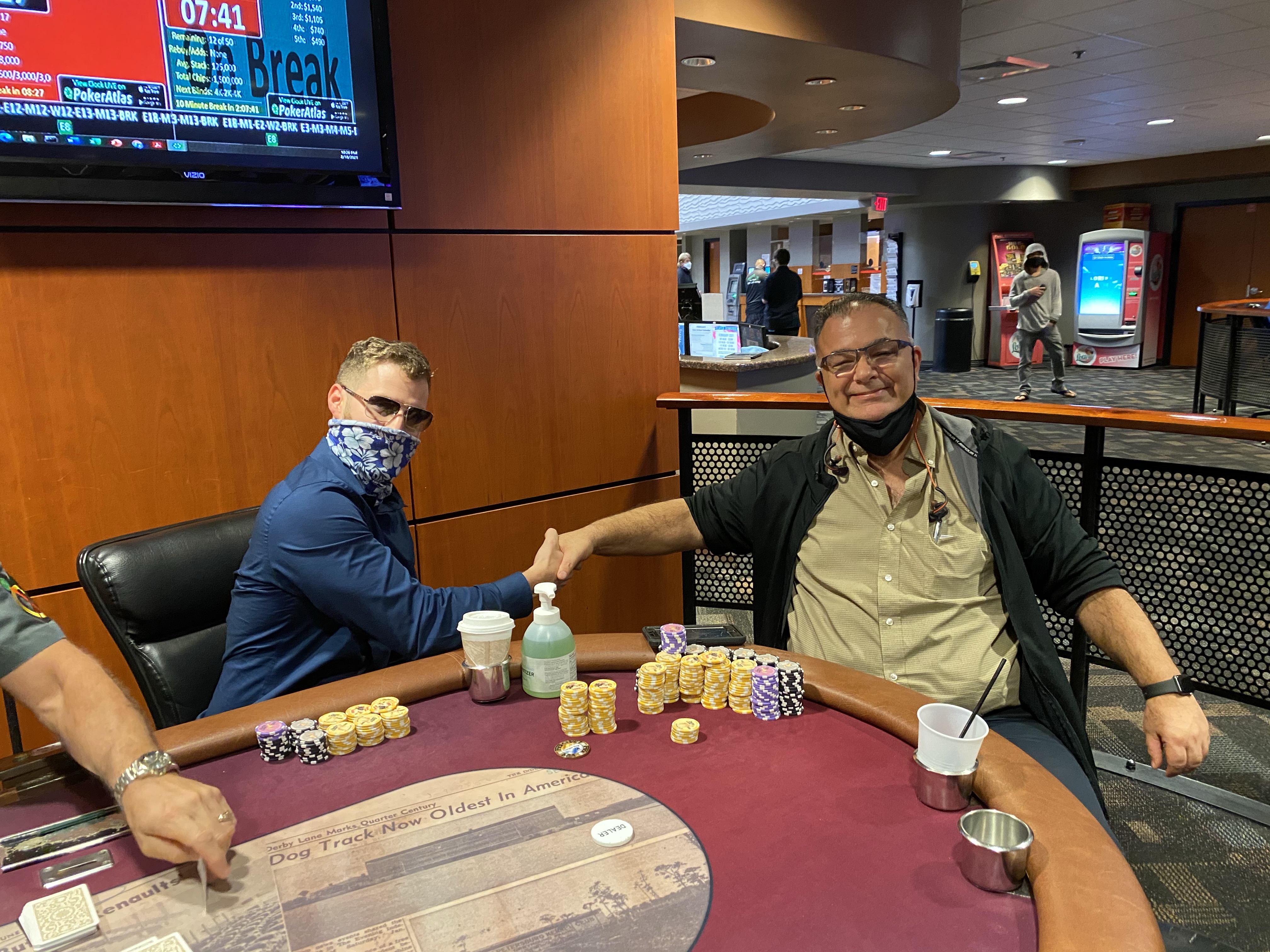 Steve, somewhat quieter than last week, had been chipping up early. Tina, short stacked, got a few shoves through then doubled through Steve.

Mark’s QQ bested Doc’s 88. Tina tank folded her A2dd and was very disappointed that she didn’t stay in. But you can’t be results oriented they say… Double up for Mark!

Tina was all in on the river with A7 and Doc, fresh from the rebuy window, snap called to double up.

It was the last hand before the break and the end of the rebuy period & Tina was all in again. Dave Miller tanked and declared that she must have T7 and folded. She showed the 7. Did she have the T? We’ll never know.

Coming back from the break, Vegas Dave was all in supershort, Andra short but more than Dave reshoved with KQo Dave doubled.

Andra doubled back up through Doc after her hand with Dave and was back in it!

Vegas Dave was out when Steve caught his Q

AJ>AQ Steve sent Doc to the rail and we had our final table!

Andrea Ruosi doubled Andra Zachow up and then doubled SuperDave up too to be fair! Andrea is a sharer.

SuperDave was out 8th when Alex’s KJ> Dave’s 77

Andrea asked if it was ok to show a card. He showed one card and Jason tank folded a set of sevens. Cough cough nit cough…

And then Andrea doubled Andra up again when he raised to 4K and she was all in with about 3K more with A8dd. Joe Parrish folded A8 and Andrea called. And flopped a set with the case 8 and rivered a Full House.

Andrea Ruosi was out 6th when Alex called with TT

Joe doubled Andra up when HER 77 bested his A4 AIPF.

In the end Andra doubled Mark up AIPF A4>QQ. The league members mentioned that someone may be sleeping on the couch…

But then she was out 5th

Joe was all in. His set was bested by Steve’s straight and he finished 4th. Steve knocked a lot of people out, he couldn’t lose! He had a MONSTER STACK!!!

Mark was out 3rd when Steve’s Q9>Mark’s AQ

Steve and Alex were heads up and Steve had no interest in chopping.

Until Alex caught up and They chopped first….

Steve is now in fourth place after a slow start. He either wins or doesn’t make the final table. That’s how he rolls. Alex is now tied with Tina in sixth place. There are no commanding leads. Mark Winchell, with his third place finish, now tops the leaderboard with Joe Parrish, our previous leader. Anyone can still win a Main Event seat!