Week 2: Huge Game: A Chop for Victor and Herb aka Ryan! 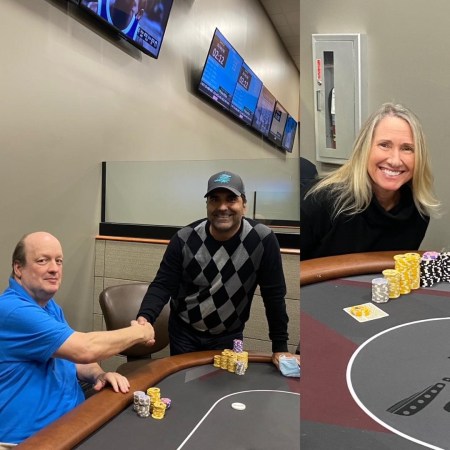 We had a few new members join the league this week and we had some subs-Chrissy Holubeck and Herb Woodbery-playing very well for members unable to attend. Next week registration is still open for new players. Win a seat to play the 2022 WSOP Main Event! Just show up next Thursday, January 20 a little before 6:30.

Early in the night, like level one early, Paul Ladisa, who is new to the league this season, was all in on the river after battling three streets with Dugg including a couple of the gray 5K chips! Dugg found a fold and we, sadly, didn’t get to see Paul’s cards.

Then at 200/300 Rob Benford opened 800 utg but with several calls Tina took over and shoved. She won the hand.

In a HUGE hand Ron & Darryl were both allin pre flop. Aces held sending Darryl to the rail. The players thought he’d win due to the hat but ?

Victor’s KK was Best and Jason was sent to the rail!

Shortly after Andra, short stacked was all in with K5cc but Jim Collins did not double her up. He took her chips.

Rob’s 33 was no Good when Jim flopped a Q with KQo.

Mark Winchell was our bubble when his TT AIPF did not win and we had our final table!

Dugg was our 9th place finisher, Chrissy, substituting for Marv Karlins, getting the knockout.

Jim’s QQ>Tina’s KJ to knock her out 8th

After a Q high flop & 2 clubs on the board Austin Fowler led out for about 12K. Chrissy tanked a bit before pushing out 25K. Two others in the hand folded. Austin thought a bit before pushing in the rest of his stack for a total of a little more than 35k. Chrissy called. She tabled AQcc and Austin showed AQo. A club on the turn gave Chrissy the flush and Austin was sent to the rail in 7th place.

Jim turned a K to knock Dave Bennett out 6th with Jim besting his 99.

And then there were four… Jim’s KK sent GingerDave home 5th. Jim was officially on FIRE.

In a MONSTER hand Victor Iemolo doubled through Jim two pair over two pair and now had about 150k. Jim’s fire had been partially doused.

In another hand Chrissy, playing for the Duckman this week, was ashamed when she had to fold her pocket ducks when Herb shoved. She knew the Duckman would not be pleased. Herb claimed to have ducks as well but later admitted to that not being true.

This time Herb had the 22 and won a big pot from Chrissy. She said she hoped Marv didn’t read the blog this week.

Jim’s luck ran out when Victor called his shove with A7o. Victor seemed to be sniffing out questionable hands by later in the night and his stack kept rising. Jim was out 4th.

Chrissy, short stacked, was next out, finishing 3rd this week-that will make it up to Marv for folding the ducks earlier. You get 10 points for 3rd place.

In the end, after a short battle, Victor chopped the points and remaining prize pool with Herb. Ryan Marin was happy to hear that his sub, Herb, ran so deep and mentioned possible good fortune for Herb when (not if) Ryan “wins the league and plays the Main Event” to quote Ryan.

8. Tina “always has it” Pridgen