Week 13: A chop for SuperDave and the Michaels! 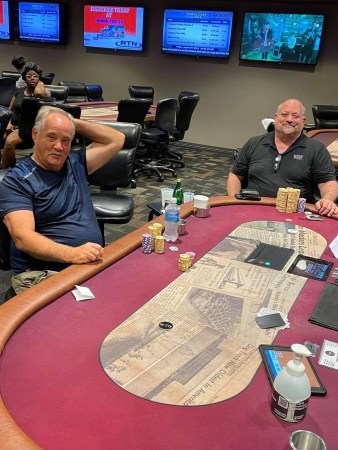 We had some more substitutes helping us out this week. Anthony Pellegrini was playing for Wally, Mike Beattie for Michael Laake, Chrissy holubeck for The Duckman, and Aaron T for Andrea Ruosi. Andrea Ruosi and Marv Karlins have had to miss quite a few weeks this season and their top notch play has been missed. We hope to see everyone back soon!

With 5 weeks left and 75 points (including attendance points) everyone still has a chance to win a seat!

The first couple of levels were uneventful at the feature table. Action eventually picked up when Brenda, who has finished or chopped 1st these last four weeks, opened. Jordan Joeckel was all in & Jason Barnett shoved over the top. Brenda sadly folded and in the end it was a chop between Jordan and Jason. Brenda folded a good hand but it was a good decision.

Down to two tables, Jordan Joeckel was AIPF with 66. Andra Zachow reshoved with AQ. Chrissy mentioned she had folded 66. Andra rivered the A for the knockout.

Ed VanLandingham was all in and Jason went over the top with TT. Ed’s A9 got the win!

Jeff Gordon was all in and Jason paid him off!

Ed VanLandingham had the best hand and Mark Winchell was sent to the rail.

Brenda, with heaps now due to her skilled play, was relentless using her stack to crush her opponents. Jason was a victim.

Andra Zachow was all in after Brenda Worley raised. Brenda tank folded. Andra said she had KK. Brenda didn’t believe her because she folded a K.

Dave Miller, somewhat short, was all in, Mike Beattie called, Andra Zachow, who had Dave covered but not Mike, shoved her QQ and Mike called. An A on the turn destroyed Andra’s hopes and dreams. Dave and Mike chopped it up and Andra was out with her QQ. Brenda may have won the hand if she had played her cards.

Dave Miller out in 7th place He shoved 44 Jeremy had KJ and Super Dave flopped quads with QQ. Jeremy doubled him up

Mike made a huge double up. He shoved on JJ443 and Brenda called with 66

Brenda was out 5th when she shoved A10 and Mike called with KQ. He hit his Q and it held.

Jeremy Becker busted 3rd when he shoved A3. Super Dave called with 10s and held

In the end the winners chopped first: SuperDave Kaucher and Michael Beattie, subbing for Michael Laake.