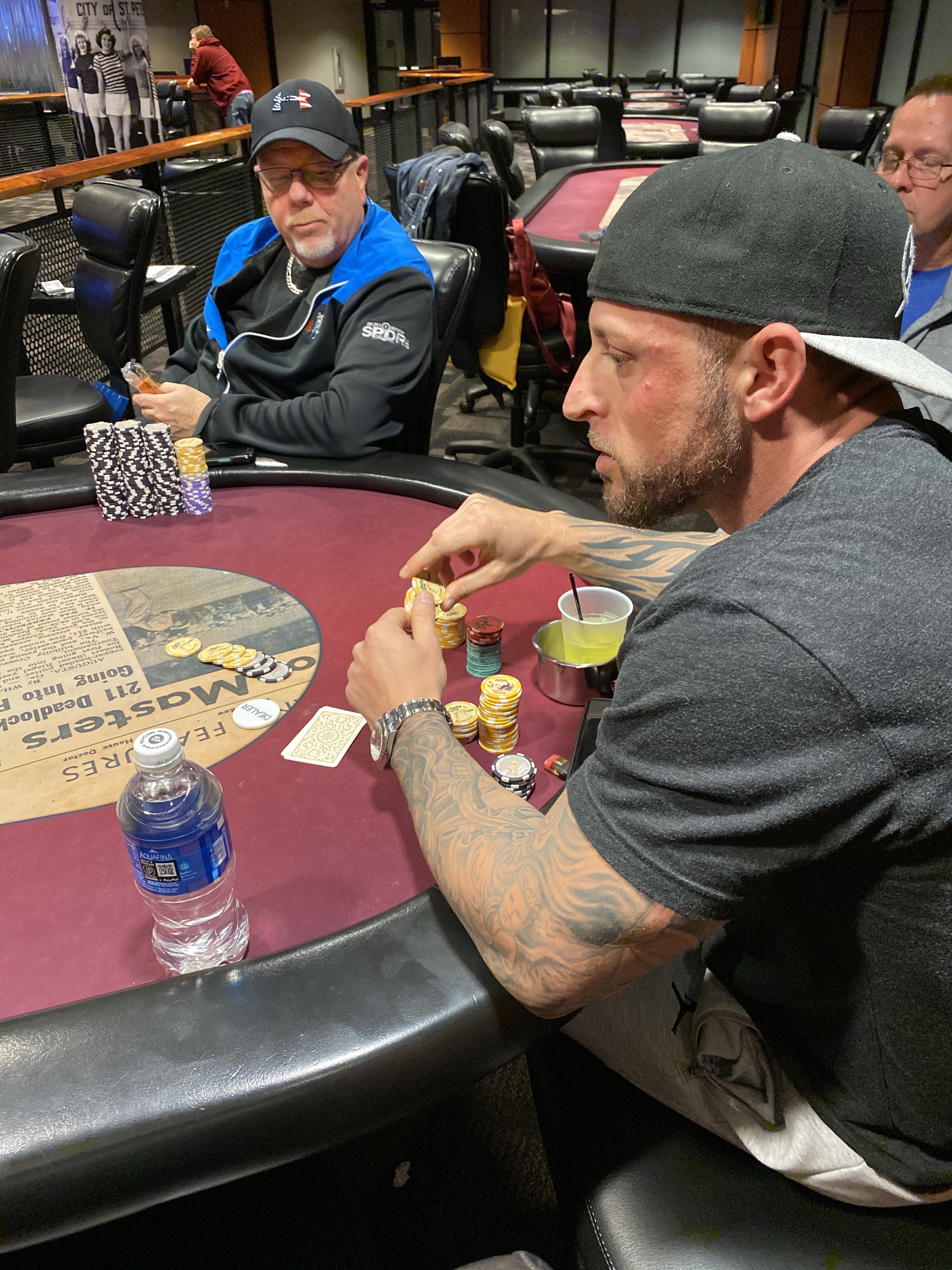 With 9 of 21 weeks complete we saw some players move up the leaderboard this week with some top final table finishes.  Andra missed the final table for the second week in a row after 7 straight final tables and was at risk to lose her 1st place overall standing but the three players who could pull ahead failed to get enough points though all three – Mark, Barry and Marv “The Duckman” did final table.    The big winner this week was Derek Csanadi who turned his short stack into the big stack to pull ahead for the win!

Early in the evening we saw Aces cracked twice.

Clive cracks Paul’s AA. All in on the turn at the outer table.

At the feature table Andra lost the minimum to Mo when her AA lost to his straight.

Dugg Hadden’s Full house > Andrea Ruosi’s trip Queens when he rivered his 8.  Andrea bet big early (level 2) and Dugg called with his 88.  Andrea could not shake Dugg with his bets and Dugg prevailed to take most of Andrea’s chips.

Dave Bennett’s KQss> Andrea Ruosi’s KT for his remaining chips but it was early so Andrea headed to the window to try again with his remaining allowed rebuy.

Derek JJ held over Ed S’ A10 All in preflop

Doc B 78>SuperDave Kaucher.  Mo was also in the hand. Mo flopped 2 pair but found a fold when SuperDave & Doc B were both all in on the flop.

Flush on the river

Clive AQ> Rob KK   Rob did not beat Clive in the hand or the Sunglasses war!

Flush on the river!

Andrea Ruosi, now at the outer table had AK

Andrea jammed on the flop

Darryl KK did not hold against Andrea Ruosi’s 65dd

Mark JJ>Duckman’s 88 for a much needed double

In a role reversal Andrea Ruosi’s A2>Duckman AT for the knockout with two more twos on the board!

Andrea Ruosi 57>Mark 77 for the knockout. Mark, Marv & Barry were the only players within reach of toppling Andra Zachow off of her 1st place leaderboard position this week. Not happening this week & after nine weeks she is still on top. Barry & Mark will have to settle for a tie for 2nd on the leaderboard.

Doc Brown shoved but no callers

The next two to leave the table were Andrea Ruosi in 4th and Clive Gavin in 3rd. Both had monster stacks but Doc Brown was building his wall and Derek Csanadi was waiting for them all to make bad decisions.

In the end Doc Brown took 2nd place and Derek Csanadi won it all with a first place finish for the week! Derek is now in 4th place on the season leaderboard!