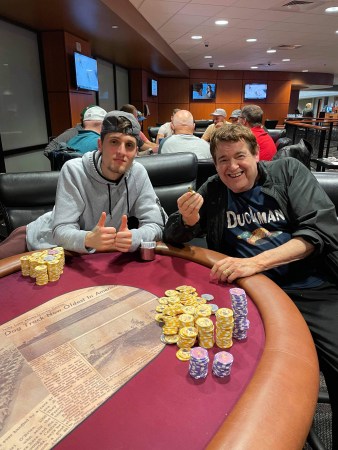 Early in the evening at the feature table, Matt Trizis, on his second bullet, found a fold after John Gordon 3 bet all in and let him pick which card he wanted to see before choosing what to do.

At the outer table, Duckman was using curse words to describe Steve Trizis after Steve’s quads were best. No duck call was heard.

Back at the feature table Brenda Worley was sent to the rail when Brenda shoved on a 4♠︎K♠︎2♠︎ board and Alex Brown, subbing for Doc Brown, tank called with 5×5♠︎. Brenda had flopped a set of twos and Alex, as he explained his call, had a backdoor straight draw and a flush draw. Alex turned another 5 for the higher set and rivered the flush.

One word. OUCH! Andrea Ruosi rivered two pair to bust Michael Laake who had QQ. In his defense, Andrea had a lot of chips already and had Michael well covered.

And ouch again, Matt was out vs Dugg! Matt paired his Ace on the flop but Dugg turned an 8 for a full house.

Jason Barnett with A♣︎K♣︎ doubled through John Gordon who had JJ. King on the river for Jason.

Marv “the Duckman” Karlins doubled through Alex Brown with a full house!

Then Alex took them back with quad Eights!

Derek Worley, last week’s winner, was out when Steve hit his Q.

Mark Winchell’s KJ bested Alex “not the duckman” Brown’s 22 not quack, not quack

Then Alex doubled through Mark…

Alex’s luck ran out when the Duckman’s KK held.

Andra Zachow was all in with 1/2 of an Antie. Mark had AQ and she had KJ. She flopped the K but he rivered the A and we had our final table!

Marv shoved 77 into Mark’s KK. Marv flopped the 7 and the set was good to knock Mark out 8th. #variance.

Ed Vanlandingham was out 7th when his KQ♥︎♥︎ vs Brenda’s 99 was no good.

There were 2 hearts on the flop but she held.

Steve “The Godfather” Trizis, playing for Mark Wiser was 5th when his all in pre A4 ran into Jeremy’s pocket JJ.

Marvin knocked out Brenda in 4th when his, of course, Deuces held v her KQ. Quack Quack!

Jeremy Becker, the winner of week one and Marvin, with his first win of the season, split first place! Jeremy has retaken first place from Jeff Gordon with this week’s win!