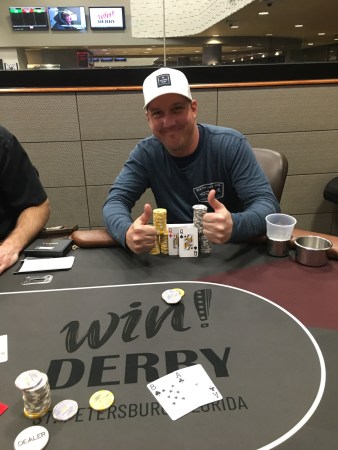 We had another great turnout Thursday night and we had Michael Laake, Chrissy Holubeck and Gino Castigliolo substituting for some of our members.

In the end, noone could fade the luck (ok maybe skill too) of Jacob “Horseshoe up his a**” Naumann as he was fondly called by his fellow league members.

Early in the evening Austin Fowler was all in with a straight flush draw against Victor Iemolo and hit the flush on the river. Victor had chipped up earlier and still had enough chips to be dangerous after the loss to Fowler.

At 200/400 Marv “The Duckman” Karlins opened 2000 UTG which is very unusual for him (that’s sarcasm if you don’t know Marv). Andra called with AK♣︎♣︎. and Tina shoved. Marv was all in as well and Andra said 🤷🏻‍♀️ and pushed in her stack. In the end Andra’s AKcc>Marv’s AQo>Tina’s KK for a HUGE pot!

Shortly after, Dave Bennett took the rest of Victor’s chips.

Paul AT> DocB KJ. Jason folded TT on the river bet and Doc Brown was out.

Back at the feature table it was Daryll > Chrissy!

Tina was all in and Dave Bennett doubled her up.

At the outer table it was

Jim “JDawg” Collins was all in after an Austin Fowler raise. Jim flopped his Ace for a double up!

With Rob being our bubble, we had our final table.

A double for chrissy!

A double for Andra on the river when she hit her 10 vs Darryl leaving him short.

A double for Tina!

Oddly Jacob rivered a 5 to knock Andra out 7th.

Dave Bennett was out next 6th

Jason vs Tina all in preflop pocket tens vs QJ♦︎♦︎ … Tina hit her 10 and knocked Jason out 5th.

Chrissy vs Jacob… Chrissy blinded out, this was her last hand. She finished 3rd. She was substituting for GingerDave Miller who now owes her at least one bottle of Caymus for adding 8 points to his stats on the season leaderboard.

All in Pre flop- final hand Jacob had most of chips it was 1:40 in the morning … Jacob had the pocket Queens, of course an A and a Q comes in the window and Tina was out 2nd … Jacob “horse show up his a$$” Naumann takes first again.

With their top two finishes this week, Jacob Naumann and Tina Pridgen are also top two on the season leaderboard!

We have 13 weeks of play remaining to determine who will win Main Event seats this season so we are officially 1/3 of the way through with enough funds for 2 1/2 seats already. If attendance continues and the rebuys at the same rate we will be sending a lot of players to the Main Event and everyone who has met the attendance requirements could still win one of the coveted seats!

The week 7 final table in order of finish was:

2. Tina “sick of Jacob and his horseshoe”” Pridgen

4. Austin “Who is that guy” Fowler

7. Andra “Was at the feature table” Zachow