Week 5: The biggest Wall EVER! AKA Monster Stack!It’s chop for Andrea “The Dragon” Ruosi and Matt “The Good Trizis” Trizis 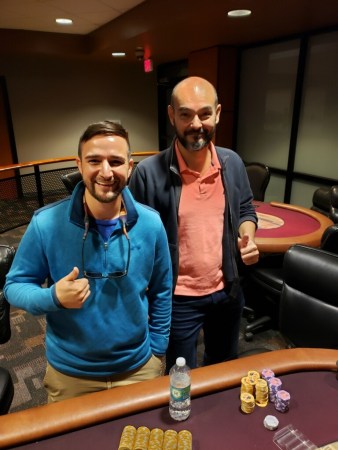 As Jason Barnett arrived sporting his usual Bronze God appearance, Marv “the Duckman” noticed that, due to the chill of the poker room, Jason’s nipples were rather pronounced. That set the tone for the evening.

At the feature table, Andra, wearing a jacket to avoid similar comments, was channeling her inner Duckman when her 22 flopped a set and Dugg stayed until the end.

Marv then turned trip sevens against Brenda Worley, but that didn’t qualify for the duck call.

In another early evening all in, SuperDave Kaucher shoved into Derek Worley’s AA.

Steve rebought and about thirty minutes later he again lamented “Me 3-4 on a limped pre. I was BB.”

On the 1st break one of the outer tables had this MONSTER STACK. Later we found out it belonged to Michael Laake.

We were down to 2 tables after Andra’s bust out hand, or as she called it, variance. The other players felt it was bad decision making when she lost half of her chips to Marv prior to the Brenda hand

Dave Bennett was the next out, counterfeited by Derek Worley.

Brenda who could do no wrong earlier, had her luck turn when her 2 pair <Andrea Ruosi’s set of sevens. Andrea was now the new Monster Stack in town.

Jeff Gordon was the final table bubble when his suited A could not improve and, of course, Andrea Ruosi’s 3 hit a pair.

Mark, with 1k behind in the big blind doubled through the chip leader, Andrea Ruosi, with 44.

Mark Winchell was out 9th when Dave Miller hit his Ace.

In the end it was a chop between Andrea “The Wall” Ruosi and Matt “Gets to Sleep In” Trizis.

With this 1st place chop, Andrea Ruosi moves up to tie in 1st place with Jeremy Becker on the summer season leaderboard.

3 thoughts on “Week 5: The biggest Wall EVER! AKA Monster Stack!It’s chop for Andrea “The Dragon” Ruosi and Matt “The Good Trizis” Trizis”