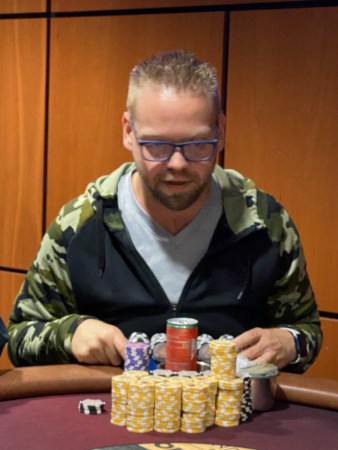 While Steve Trizis was off in the Greek Isles cavorting with celebrities, the feature table was still full of older folks talking about their ailments. Someone did mention a fleshlight after Dave Miller actually said he needed a flashlight to see his cards (due to his ailments). It was determined that no-one should get Lasik surgery after the age of forty and a needle in the eye is painful. Poker was occasionally discussed.

At 100/200 Wally hero called Dave Miller’s bullshit triple barrel bluff for a HUGE pot. To reiterate, it was a bullshit hand that Dave Miller played.

No callers for Brenda’s all in!

Jeremy Becker was moved to the feature table after the first break and was complaining about his short stack. In this hand he was AIPF but noone called as they were all terrified.

Marv “The Duckman” was all in preflop . He doubled through “not that” Jeff Gordon.

“Not that” Jeff Gordon was out when Jordan Joeckel’s hand was best!

Jordan and Jeremy played the one card game.

On the bubble Mark Winchell’s shove was not called

Dave Bennett was our bubble.

Jeremy put Andra Zachow , the short stack, all in. They chopped.

John Gordon was out 9th when Michael Laake woke up with AA.

Jeremy doubled Andra “Not Ruosi” Zachow up! Andra, a short stack specialist, is a force to be reckoned with!

Jeremy had the ducks!

Three way all in, Brenda hit the full house and Mark Winchell was out.

SuperDave was out 7th!

Andra was out 6th.

The Duckman was out 5th!

Brenda had a huge double through Michael! Brenda was the short stack not too long ago and BOOM! She had a monster stack!

Set over set and Jeremy was out 3rd leaving Brenda Worley and Michael Laake to battle heads up!!!

In the end Michael Laake took first this week!