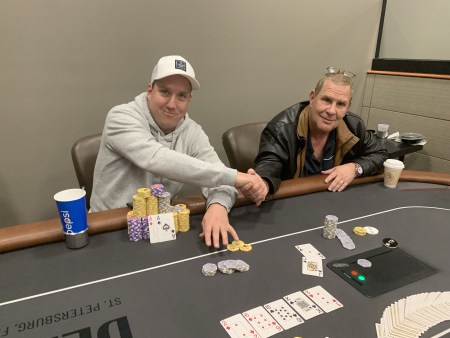 This week at Derby Lane aka Win! Derby the Elite Tampa Bay Poker League welcomed a new member who has played in the past, local notable Jim Brinkley. Everyone loves Jim, unless he’s at their table.

Mark Winchell’s QQ<AKss to Joe Parrish. Joe limped with 2 others, Mark made it 1500 Joe jammed 9100 Mark called. Mark was left on fumes.

Shortly after, Mark chipped up some after his KK>QQ>99, like it should happen.
Mark>Victor>Matt

Marv’s attempted bluff did not work against Jim Collins and he was sent to the rebuy window.

Before the first break/end of rebuy it was Dave Bennett with A8> Ryan Marin’s 67ss and Rob Benford’s 45. Quads for Dave was good!

After rebuying, Marv “The Duckman” Karlins bet 5000, Doc Brown shoved & there was a call. Marv was sent to the rail.

Still at 400/800/800 Rob Benford raised to 2K. He had 4 callers. On the flop Rob bet 7K. It folded to Allen Wiseman, subbing for Ed VanLandingham this week, who shoved. Rob called flipping over JJ, Allen had flopped a set with his 33 and held. Allen more than doubled. New rules were immediately set by the league management that substitutes have to have less than $12,000 of earnings on Hendon Mob.

Allen Wiseman was all in but Ryan Marin called with a better hand. If Ed asks, it was set over set. No need to look at the pictures. If anyone needs a sub, please ask Allen.

We had our final table! We actually had two members at the final table with the last name Iemolo, but I don’t think they are related because they said if they were heads up they would not chop. Ryan Marin was, again, heard saying “When I win a Main Event seat” instead of “if” I win a Main Event seat. He’s a bit cocky. Rob said “remember my 45 hand earlier? Watch out.” Dave Bennett reminded everyone he made day two of the WPT Main down in Hollywood. Then Jacob brought out his Wynn Trophy from this past November. He actually carries it around in his backpack. That pretty much shut down all of the trash talking.

Rob Benford finished 9th when Dave Bennett straightened out on the river.

Ryan took some of Rob’s chips from Dave Bennett

Doc Brown said he had nines after Ryan tank folded.

Jim Brinkley was all in before the break but no callers. Frankly, most players are terrified of Jim after his recent first to last to first finish at Derby Lane. Jim is a survivor in many ways.

John Iemolo was all in with Ryan and Dave B calling. He flopped the nut flush draw but it didn’t get there and Dave won with 88.

In a HUGE tournament changing hand, Jim Brinkley, getting short, was all in . Joe Parrish called. Ryan Marin went in the tank before shoving his stack. Joe tanked a bit & found a call. All three had great hands but Jim’s was best. Ryan had a kazillion outs but no good and Joe won the side pot. Ryan finished 7th.

Victor Iemolo went all in with for 15k @ 2500bb with AT and Jim Brinkley called and won with Q9. Victor was our 6th place finisher.

Next, Jim Brinkley’s luck ran out. Jim’s A6o lost to to Dave Bennett’s 55. Jim was out fifth. With 6 points for a 5th place finish, Jim is already ahead of quite a few players who have been here since week 1.

….like kissing your sister…. Joe Parrish and Dave Bennett chopped this hand.

Jacob’s QQ>Dave Bennett’s AJ and Dave was out 4th.

Jacob’s A3>Joe’s AQ AIPF (All in pre flop for those who don’t know poker acronyms) for the knockout in 3rd!

In the end, despite doubling Doc Brown up multiple times, Jacob got the win, his second this season and he’s only played 3 of the 4 weeks! Jacob is now in first place on the season leaderboard.