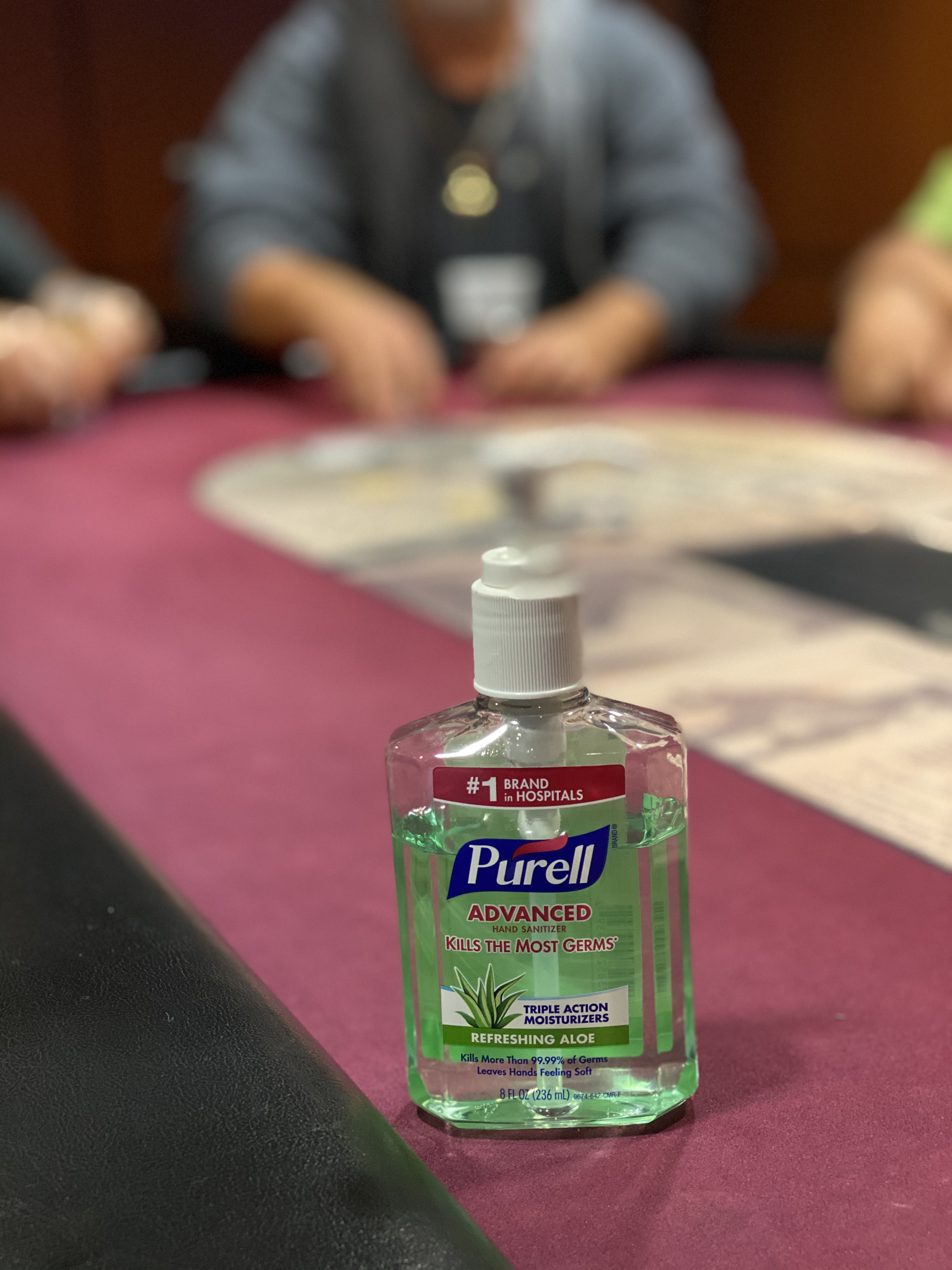 Week 11 of the Elite Tampa Poker league was underway despite the Pandemic, National Emergency, world closing Corona Virus aka Covid-19.  When asked why the league continues to play under such dire conditions one member, under conditions of

anonymity, stated that if there is anywhere safe to play it would be at Derby Lane where major precautions have been taken to ensure the entire facility is hospital grade clean.  There was also a lot of elbow bumping celebrating good hands and a champagne toast and birthday cake for the birthday girl, Andra Zachow, who is celebrating her 49th birthday yet again this week.  Despite attempts by the top part of the leaderboard, no one was able to knock Andra off of her first place pedestal where she has been since week four of the league though Andrea “The Dragon” Ruosi was able to move up to second place on the season leaderboard..  We are now more than half way through our 21 weeks of play but with 170 points still available over the next 10 weeks (16 points for each win and 1 point for each week of attendance) truly anyone can still win a Main Event seat if they meet the attendance requirements to qualify.

Early in the night we had our first bust when Barry Jacob’s QQ>Ed Sojack’s JJ sending Ed back to the window.  Ed had been bricking every flop since the start and, short stacked, finally had his first good hand of the night only to see Barry turn over his queens.  It was painful.

Andrea Ruosi was seen headed to the window from the outer table as well after flopping top pair and losing to a flopped two pair.

Mo Maher was running good Thursday night.  He rivered quad fours with one four in his hand and Bill Mckown snap called Mo’s all in with fours full of his pocket Aces to double Mo up.  It was the perfect hand for Mo,  what else could Bill do?  How was he to know the Mo would stay in with suited six gappers?

Bill, short after his bad beat by Mo, was then all in with the ducks 22 and held against Ed Sojack’s A3 for a double.  Bill’s stack was very short and someone had to call.

At 100/200 blind levels, Ed Sojack was sort of short when Mark Winchell raised about 5x to 1100.   Ed shoved his remaining 4300.   Andra, sensing that Ed was shoving light due to possible tilt, and forgetting that Mark had raised to 1100, called Ed and was relieved to see Mark fold. Ed showed AKo and Andra turned over 77.  No, Ed wasn’t light at all,  but after a 7 on the flop and another 7 for quads on the river Ed was out for the night.   Mark was pretty happy he found a fold with his 99.

Still on a heater it was Quads again for Mo but noone else materially participated.

On the second break the league celebrated Andra Zachow’s 49th or so birthday which was on the 11th. Since it is a month long celebration she has had 3 cakes so far this week and planned for another on Friday.

Back from the break, Bob Scholz, subbing for Rob Benford this week, was lucky when his AJ bested Bill McKown’s AK♣️♣️ for the knockout

Andrea “The Dragon” Ruosi was all in with his big stack (basically a wall) with his nut flush draw and Mo snap called with two pair that improved to a full house for a full double up.

At the outer table

Clive KJ and  Doc Brown had A5

Paul Mastella counterfeited Derek Csanadi when Derek shoved two pair on the flop with 67, Paul called with A6 and turned a better two pair for the knockout.

And we had our final table!

Clive Gavin >Bob Scholz for the knockout. Since Bob was subbing for Rob Benford (one sub allowed during the season) Rob gets the one point for the 10th place finish.

Andrea Ruosi and Clive Gavin had a side bet going on who would bust first.  Clive busted but made every effort to ensure that by taking the proceeds Andrea would get as many of Clive’s germs as possible.  Andrea soaked the bill in hand sanitizer and hoped for the best.

Andra Zachow AQ>Mo Maher 66 for a big chip up.

Andrea Ruosi FH>Dave K Flush. Dave out 3rd.  When the flush came on the river the table was celebrating the Dragon’s loss……..until they realized he had the full house.

Andra Zachow, knows for her short stack specialist capabilities tripled up her 2 big blinds with AJ!

Andrea 57>Paul 85 >Andra KQ.   Andra was out 3rd when they played shitty hands against her after she didn’t shove all in preflop.

In the end it was a chop between Andrea Ruosi and Paul Mastella! Congrats!

One thought on “Week 11: It’s a chop! Andrea “The Dragon” Ruosi chops 1st with Paul “The Teacher” Mastella but Andra “The Birthday Girl” Zachow Still tops the leaderboard!”