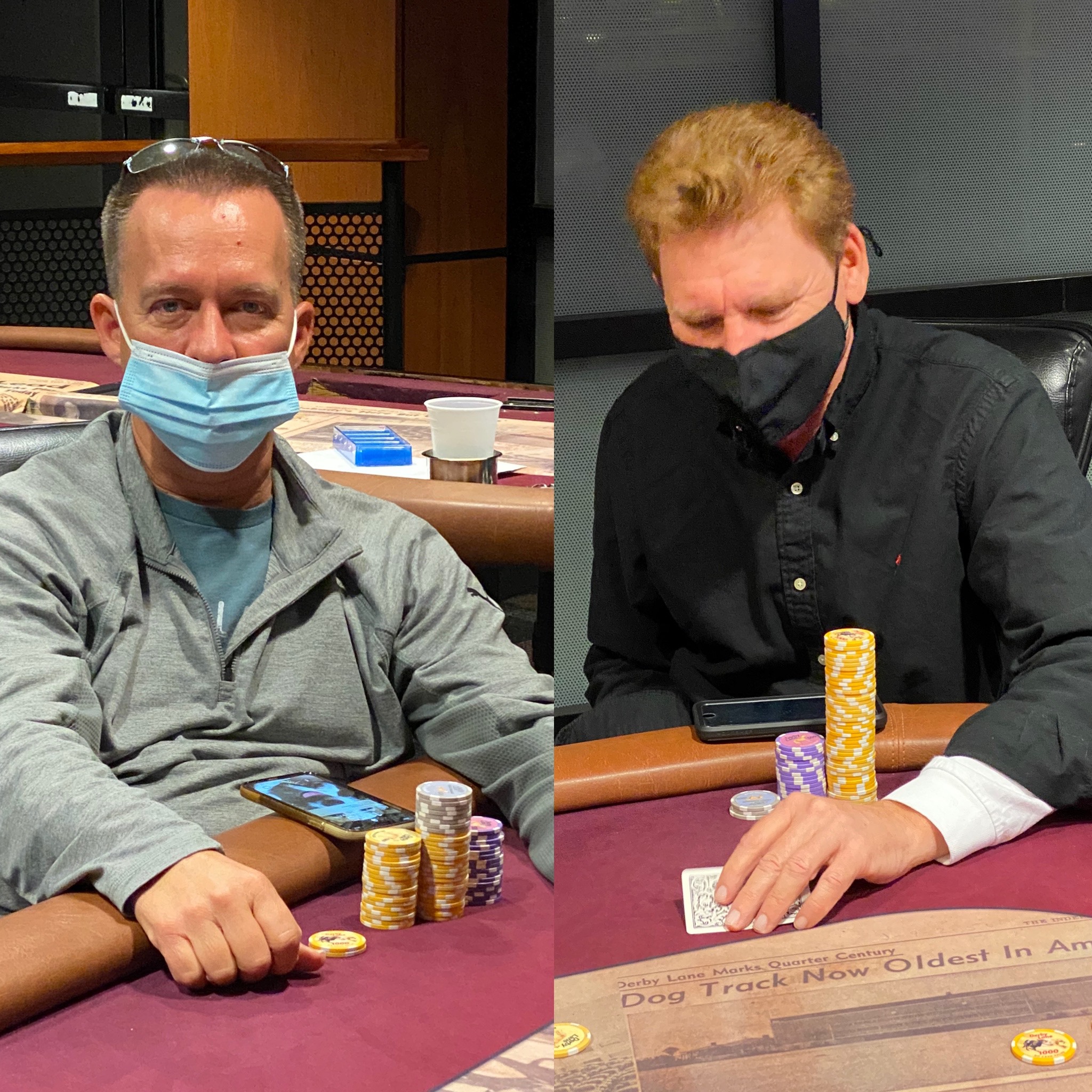 The new Spring 2021 started with 14 players currently signed up and room for about 24. There are 4 more weeks of registration (must play 16 of 21 weeks). Play is up to 8 handed and an 8 player final table and points. We have some new players this season in addition to those that have played for many years, new faces are always welcome! For more information or to join contact strizis@gmail.com, andra@ingallscpa.com or message us on facebook or here. You can just show up next Thursday a little before our 6:30pm start too. See the “about the league” page on this website, Tampabaypoker.com, for full details.

The night started with the usual shenanigans from Andrea Ruosi who was quickly at the rebuy window.

Mark’s QQ > Andrea who was on his second bullet early. Andrea brought a delicious Italian cake to share on break so he will be allowed to continue in the league.

Steve “The Godfather” Trizis didn’t make a final table this week. The last full season started off similarly where Steve had an unusually bad start but ran it up by the end of the season and won a Main Event seat. He’s cashed the Main in the past and the members have benefited.

Right before level 4, the end of registration, Jason and Bob, both short, are all in, John shoved about 14K Andra called with 88 & about 21K because she’s a bad player. She found out John had KK. Ouch. Jason and Bob went to the rebuy window on break but Andra who still had chips couldn’t. The months since the shutdown have taken their toll on Andra and her good run and top standing in the league in Fall 2019 and Spring 2020 are apparently over.

Andra was out when her KK<A4 John’s nut flush on the river beat her K high flush. Yeah there was an A on the flop too.

There were many other great hands at the two tables but it’s hard to blog and play at the same time.

We had our Final table!

Shortly after the final table play began Jason Barnett, short stacked, was out 8th. Jason has won Main Event packages in the past and plans to again. He better plan to play better.

Father and son Doc Brown & Alex Brown both made the first final table of the season and we quickly found there is no “family” or friends at the table.

Chrissy, down to barely more than 2 bb was all in, a full house helped.

Again Chrissy was all in and doubled through John who, on the river, claimed he had a straight. He didn’t actually have a straight, but he freaked Chrissy out.

Joe Parrish was all in with approx 18bb and AKo. John, who had him covered by approx 20+ bb more called with KQo. The K on the river gave Joe the double up. Joe has a long history in poker with a 336th place finish in the 2010 WSOP Main Event. Many League players have had success in the WSOP and if a seat is won via the league 10% of the winnings go to the League members to share.

And then he got a flush…

And another double for Dave – through Doc Brown this time

John was out 7th

Joe’s AT held and Doc was out 6th with AK

All in, Mark’s 99 held against Joe’s AK. The first time 99 has held against AK in Mark’s entire life. Or at least this year.

And no call this time. PS Derby has Yuengling now! #2021isalreadybetter

Mark KK>Joe 22 for the knockout. Joe Parrish finishes 4th on the money bubble.

And then Dave doubled through Alex Q5>AKo with a flush

In the end Dave finally busted Alex in 3rd place leaving Mark Winchell & Dave Miller Heads up. They immediately agreed to a chop as they are older fellows who value their sleep.

The Final table in order of finish was: