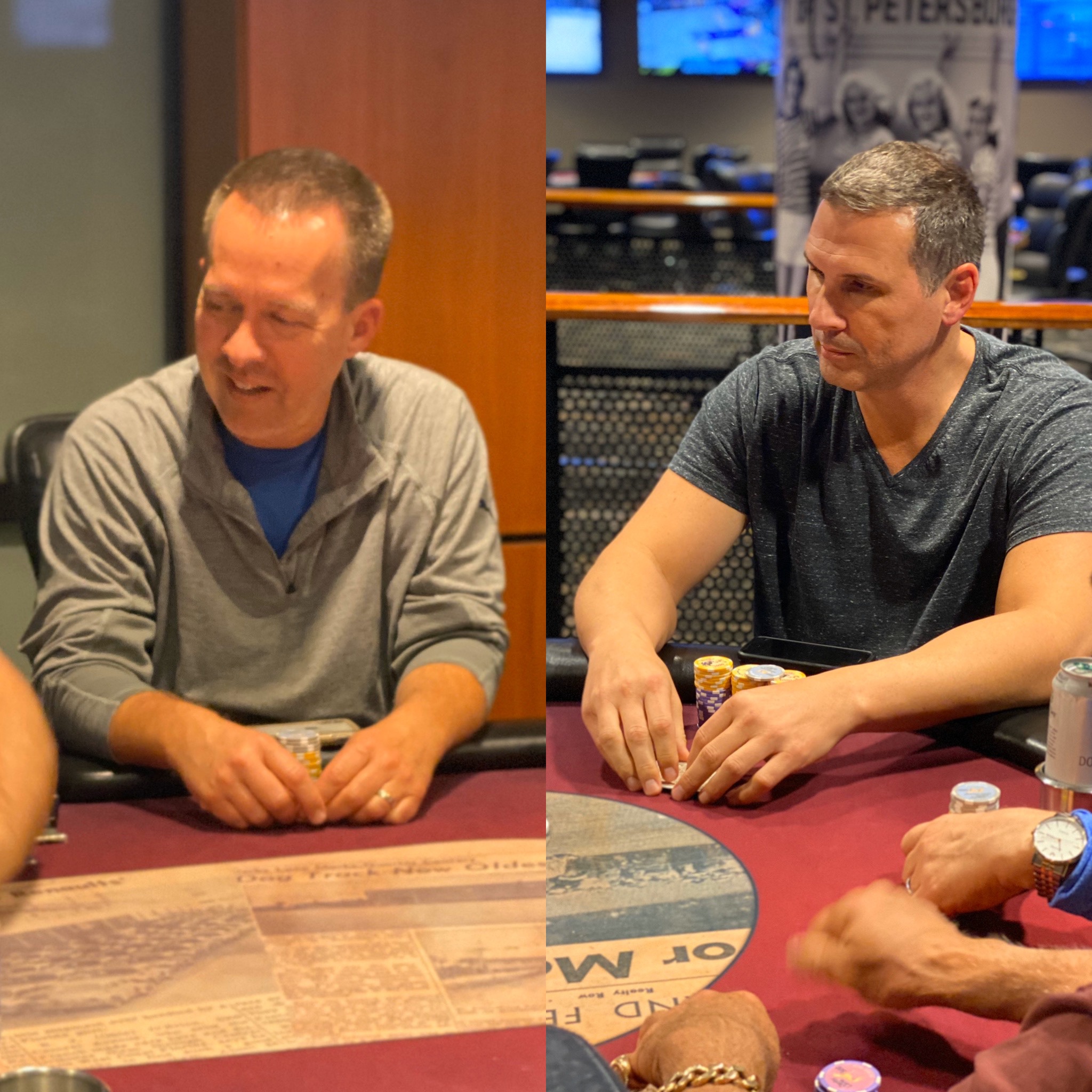 Chrissy, the most popular substitute this season (she finished 3rd last week for Marv), is playing for Darryl this week.

At the outer table Paul Mastella 79♣️♣️>Marv Karlins KK.  Marv may have done a sign language version of inappropriate language.

Barry Q5>Superdave J9 for the knockout with Q high (like a boss)!

with two tables left, Barry bullied the players at the feature table with his monster stack… He was relentless.

…. but her 88<Andra Zachow AQ out 11th, she felt bad as she was a substitute for Darryl but this allowed a point for attendance for Darryl which is better than an absence.

In a HUGE upset, Ed Sojack called Andra’s short stacked shove with 11 left.  Ed had  AA>Andra JJ.  Everyone saw the Jack in the window and Andra had decided she must be on quite a heater, but the turn gave Ed a straight & he then rivered a flush. No more final tables for Andra who was 7/7 final tables before this week and will still be #1 on the leaderboard despite not making the final table (only Marv had a chance to pull ahead of her this week)…

We had our final table. Andra, who stayed a bit to support her husband Mark Winchell, offered a $50 bounty on Barry who will be one point behind her if he wins this week.

Rob’s AJ good enough for a triple up through Ed S & Barry.

Mark A7>Jason KQ for a much needed double

John “Muscles” Gordon, whose incredible published poker history (see Hendonmob.com) starts with a 2nd place in the $2500 1995 WSOP for 124K+ (a deal was struck with Dan Harrington actually) and totaling more than $1.3M lifetime winnings, held with KK>Rob AK for a double. John is one of the most notable player in the league.

Chop! Paul & John when the board rivered a straight. Paul K8=John AA

Mark Winchell doubled up through Muscles when he was counterfeited by two higher pairs on the board.

Muscles was all in for 25K+ after a raise by Andrea Ruosi who represented the league in the WSOP circuit event this past weekend. Andrea found the fold.

Derek TT> Andrea AA for a double up

Rob AT>John A9 when he rivered the straight!

Barry AQ > Andrea Ruosi for the knockout in 10th!

Rob, getting short, got one through

There were still 9 players left at 11PM. The short stacks kept chipping up!

Jason KK>Rob AQ to know Rob out in 8th place this week.

Derek  was all in preflop with xx

Barry all in on flop and Jason snap called

Jason A9>Bill KJ.  Jason felt that his run good was karma because he paid his league fee this week.  He felt all of the positive energy because he was paid up.

Mark then doubled up through Barry!

Barry out 3rd after a 3 way chop of the prize money.

Jason then agreed to a pity chop for 1st with Mark Winchell!