Week 2: HUGE GAME! The Dragon and the other Jeff Gordon chop! 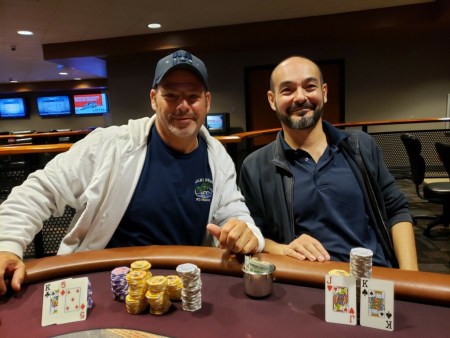 Michael was all in for his remaining $3K but no good and Jeff Gordon took them. Ed Vanlandingham lamented folding his pocket twos and Duckman was pretty stunned that Ed folded such a great hand.

Early on Mark Winchell doubled through Ed Sojack when he flopped 2 pair on a QT5 flop and Ed felt over confident with his AQ on the river. Jordan Joeckel knew something was up and found a fold despite his JJ. Jeremy doubled through Dave Miller when his A4 flopped two pair < Jeremy’s 44 set. Jeremy won week one and has already booked his room for the Main Event this fall and may be already selling action at 1.5.

And Ed Vanlandingham was out early after his 2nd place last week. Ed is also considering selling Main event action at 1.5.

John Gordon, one of the more notable players in the Tampa Bay area, doubled through Marv “The Duckman” Karlins AA>QQ. Jeff Gordon limped and Andra raised to 900. Duckman raised to 2k and John and Andra called. After the flop Duckman was all in and John snap called. Andra found a fold with a hand she really shouldn’t have opened but was bored.

Andra’s KK was bested by John Gordon’s 23o when he flopped 2 pair and she shoved after he 3 bet her. He finished up with a full house for max pain. John was in position so not really the worst preflop call ever but….

Andrea Ruosi was out shortly after late regging. Like maybe 7 minutes in, 99<John Gordon’s JJ but rebuy is allowed until 1st break.

On her second bullet Andra was out when Bob Sholtz turned a straight over her set.

At the outer table Mark Mahler doubled through Jordon Joeckel to stay alive!

Also at the outer table week one winner Jeremy Becker was still at starting stack after the first break but was eyeballing Mark Wiser’s chips thinking he would be an easy target.

At the outer table SuperDave aka DinnerDave aka Dave kaucher>Ed Sojack for the knockout. We missed Ed last season and despite him being Andra’s nemesis she said she was happy to see him back.

On the bubble Mark Winchell and Dave Bennett chopped a hand.

Mark Winchell was all in preflop For about 4200 and had two calls. By the river he had quad Kings! Mark will be playing the Main Event this fall for the league so we have some guaranteed money.

Jordan Joeckel doubled through Derrick on the bubble

Mark Winchell’s AA was good and he faded the flush to double up through Jeff Gordon.

Derrick got a much needed double through Dugg Hadden

Dave Bennett ran into Mark Winchell’s AA on the bubble and we were down to 9 and our final table.

Derrick got one through

John Gordon found a fold. Later Dugg admitted that he never actually looked at his hand because he knew he couldn’t win against John if he had. John has an uncanny ability to read other players so no information was the safest play by Dugg.

John Gordon tripled through SuperDave Kaucher and Andrea Ruosi with SuperDave winning the side pot.

John’s luck did not hold and Andrea won back all of John’s chips with J6 when he caught a four flush.

SuperDave was all in short with 22, Dugg raised and Andrea Ruosi shoved. Andrea turned over KK, SuperDave 22 and Dugg AJ. Dave’s FH tripled him up and Dugg’s J doubled him up and Andrea’s wall of chips was toppled! KK was supposed to win there btw…

No callers for Mark Winchell

Mark Wiser was out, Andrea had the best hand among the two shitty hands.

Then SuperDave doubled up through Andrea Ruosi!

Andrea’s 2 pair was counterfeited and Jeff Gordon doubled up

Jeff Gordon flopped a straight and Mark Winchell was out!

Dugg was out 5th when Andrea’s Queens held

SuperDave was out 4th when he shoved into Jeff Gordon’s FH!

Jordan Joeckel’s A8 was no good and Andrea Ruosi got the knockout in 3rd!