Week 8 recap: Jeff Ferrara gets his 2nd win of the season – this one a chop with Landon Brown! League members DOMINATE Tampa Poker Classic and check out the upcoming charity tournament! 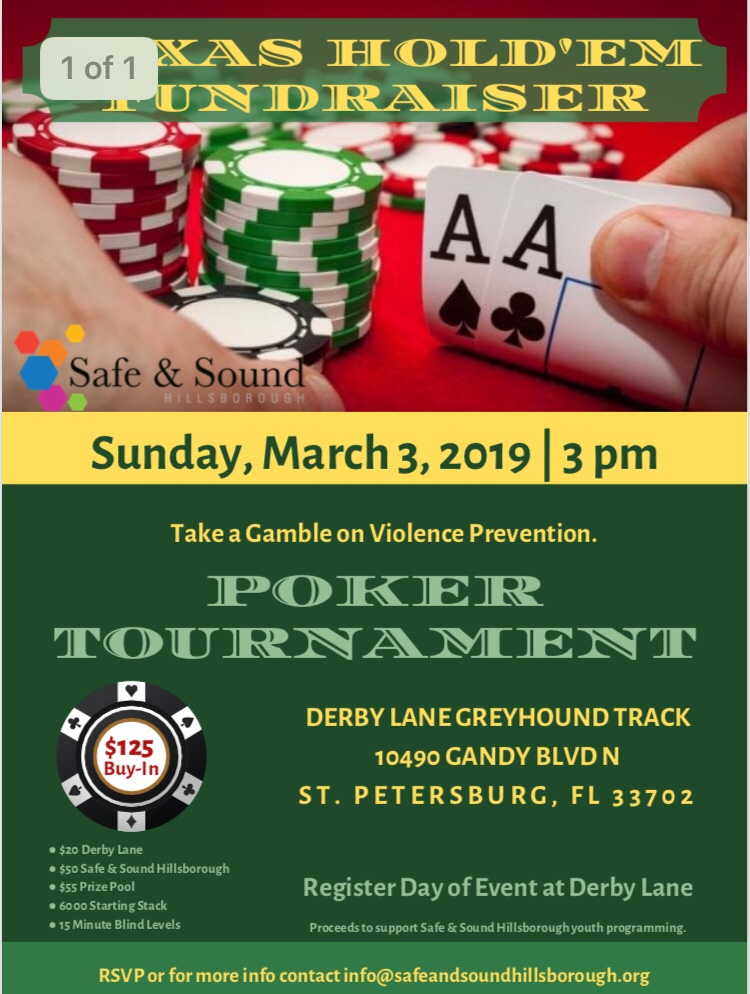 Before getting into the details of week 8 we want to share the upcoming Safe and Sound charity poker tournament on March 3rd at Derby Lane.  The picture gives the details.  You can RSVP to info@safeandsoundhillsborough.org

Below is a summary of some noteworthy hands. of week 8 Take notes! This is our version of the hole card camera!

1st hand of the night. Trey versus Marv. All in on the turn. Nut flush over flush. You’ll have to guess who was playing the A4 of hearts….

Steve Trizis doubled up against Chrissy early when his A-J bested her A-10cc. 2 clubs on the flop. But Steve’s hand held.

All in preflop. Marv shoves first with QJxx. Aaron reshoves with JJ, Muscles shoved a small stack with AK. He hits and triples up. Marv is out.

SuperDave shoved. Sherry called. A-7hh for Dave. A-10xx for Sherry. Sherry won. Dave is still smiling. And still in. He tripled up the next hand to 1800

Then SuperDave was out the next hand when Jeff rivered his QQ.

Area Notable Mark Winchell got a double up vs Lawyer Joe Parrish.

Next hand Sherry was knocked out when she went all in with A-9 Vs Aaron Q-J. Aaron rivered a Queen

Mark’s good run came to an abrupt halt when he got a terrible beat by that punk kid Landon.

Then we had our final table!

Next hand Jake shove with A-K. Gets called by Landon (QQ). Landon holds. Jake out 10th.

Chrissy all in for $10K. She 4 flushes Jeff and Aaron for the triple up.

In the end Jeff/Juan/Landon chopped the cash $840 a piece before going for the points.

With Jacob’s final table this week Kenny O’Donnell and Jacob are now tied for first on the season long leaderboard!

The league has been well represented this past week at the Tampa Poker Classic series over at the Hard Rock with many league members cashing including Juan Rodriguez’s 2nd place finish in the $570! We at the league like to think that these players learned their high level of skill here at the TBEPL!  Below are some screen shots of the write ups and pictures!