Fall League Week 8: Ed makes his first final table with a win but watch out! Andra’s moving up and the ladies are on a heater! 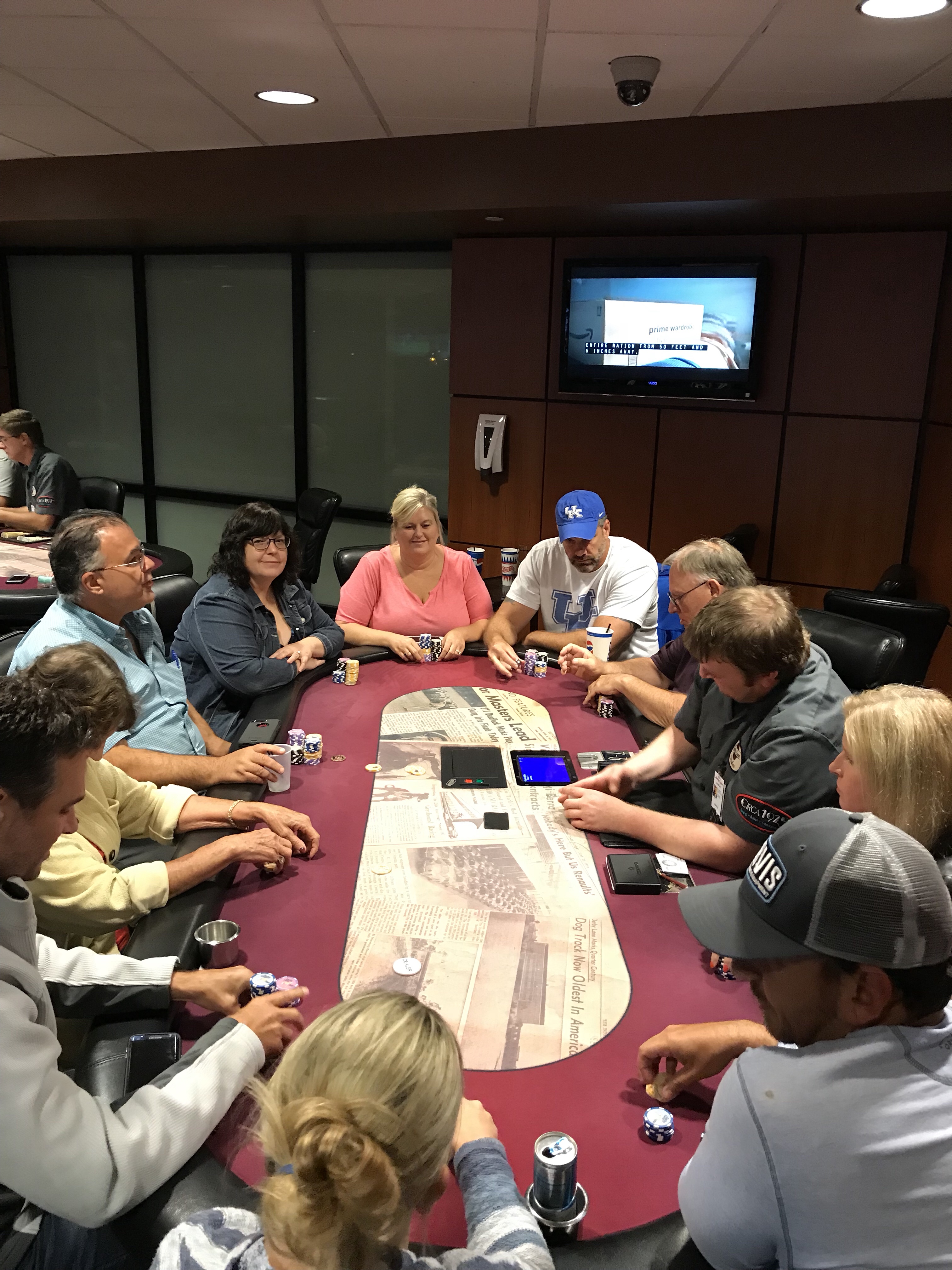 We have completed 8 of 21 weeks of our Fall league and anyone can still win a Main package.  We have the battle of the Peters going on right now (a bit awkward sounding isn’t it).  Peter K has had some top finishes and Peter D has been making consistent final tables.  With two middle position final tables and 2nd this week Andra has jumped into 5th place, the best she has done in all of her league play.

A summary of this week follows:

After making a final table in week 1, Steve Huff was out early this week when channeling the Duckman did not work out for him, only the Duckman can instill fear when he shoves in unusual positions!!!

Dawn Gwin chipped up very well early last Thursday and was a force to be reckoned with all night with a nice stack.  One hand early on she flopped a straight > Allen Wiseman’s KK.  It was determined that having your first grandbaby is good luck!

Darryl shoved 2200 short stack and Steve called. Oddly Marv shoved with about 8K more than Steve and Steve saw through his ruse and snap called more than doubling his stack.

After Andra chipped up early she was feeling pretty confident so when Reno shoved on an Axx flop for 9K,  Andra, regretably, called AJo< Reno’s AQ to get back to starting stack.

Dugg was a bit miffed when Tina busted him early.  He thought Tina was all in and said call and showed his flush face up.   It turned out she hadn’t actually shoved – Dugg and the dealer were mistaken.  Dugg’s call was not an all in call but just a call, but now his hole cards were face up.  When the river came Tina shoved. Dugg tanked knowing that Tina knew what he had and there was a paired board.  Gascard broke the silence and  asked,  “So Dugg, what do you think she puts you on?”   Dugg called  and she had a Full house beating his flush.

Steve Trizis saved the rest of us from one of the season leaders when he called Peter D’s shove with AQo . Pete D was out with 99 no good.

Dawn Gwin, with a nice stack raised when blinds were  300/600 to 2200.  Andra reraised to 6K and Dawn called to see the flop. The flop was 3 hearts. Andra had JxJh and shoved about 8K.  Dawn called with Ax8h.  Andra’s JJ was good and she turned the higher flush with the Kh on the turn over Dawn’s 8h flush.  This chipped Andra up and she was on her way to a good run.

Karlins shoved 99 and ran into Andra who shoved a lot more with JJ.  Andra was already counting the chips in her head when the board ran out twos full of kings for a chop and Duckman was still alive! 👀

After whining about being short stacked  & signing up for the 2/5 list (which, similar to standing up and getting ready to leave when you are all in, seems to bring luck in a tournament) Chrissy knocked out Jason and replenished her stack Q9dd >92 Jason Barnett.  With a  flop of nines Jason was never going anywhere but all in.

Gary knocked out Allen with when flopped K to improve his KK to a set.

Chrissy then really chipped up when she knocked out Gary when she had the KK>Gary’s 99.

On the final table bubble with 11 left Steve Trizis doubled up  through Chrissy when she flopped 2 pair to Steve’s set to dash her hopes for a final table after a good run up.

Steve’s big stack was short lived when Tina, who had a monster stack going at this point, had AK>Steve’s KK for most of his chips.

Dawn Gwin said F word to Joe for shoving her off of a 3 way hand when she had an awesome hand.  It was requested that we make note of her foul language.

Edie, who had dwindled down to a short stack,  tripled up her remining 3100 with Kings full when Ed & Pete K called

Then Edie dbled again with two pair through Joe Gwin

The Steve doubled though Joe Gwin AJdd >AKdd he got a flush and Joe was out 10th for an extra point.

Edie continued her heater when she shoved and Joe Parrish called with KJo.

Edie’s AQo.  With a Spade flush Edie has A of spades,  Joe K of spades and Edie doubles again!

Dawn then doubled Sherry who was getting short.  Sherry’s JJ > Dawn 33.

Tina’s good run continued when her straight >Pete K’s top pair to knock him out in th.

Steve QQ>Sherry JJ to knock her out 8th

Tina doubled Joe Parrish when her K8o ran into his KK & he got a full house.

Steve then doubled Dawn back up when her AQo>his 99

Tina then ended Steve’s run up when her A4o knocked Steve out 6th.  He warned everyone that he would be back and that he would win.  After he gets back from Greece.

Dawn & Ed had some excitement when they chopped an all in when both had A8.

Andra doubled thru Ed when her AQ improved to a set on flop giving her a much needed boost to her stack.

The ladies were on fire this week with a final table made up of half men and half women. In the end it was only Ed left representing the men with 5 left. He held on to win but not without a big fight! Ed got a dominating lead when he knocked Dawn out with his pocket Queens.

Ed’s huge stack enabled him to knock Tina – a big stack all evening – out when his 44 which improved to a Full house was better than Tina’s 23o? (Straight draw)  Tina was a bit relieved as she ad a very long day and was pretty exhausted.  Sleep deprivation is apparently a good luck charm.

Ed then knocked Edie out in third leaving him heads up with Andra, a daunting position to be in for anyoe.

Ed got lucky fairly quickly when Andra was all in with 77 and Ed’s K8o held up for the win.

The final table in order of knockouts (ie first place is last on this list) was: