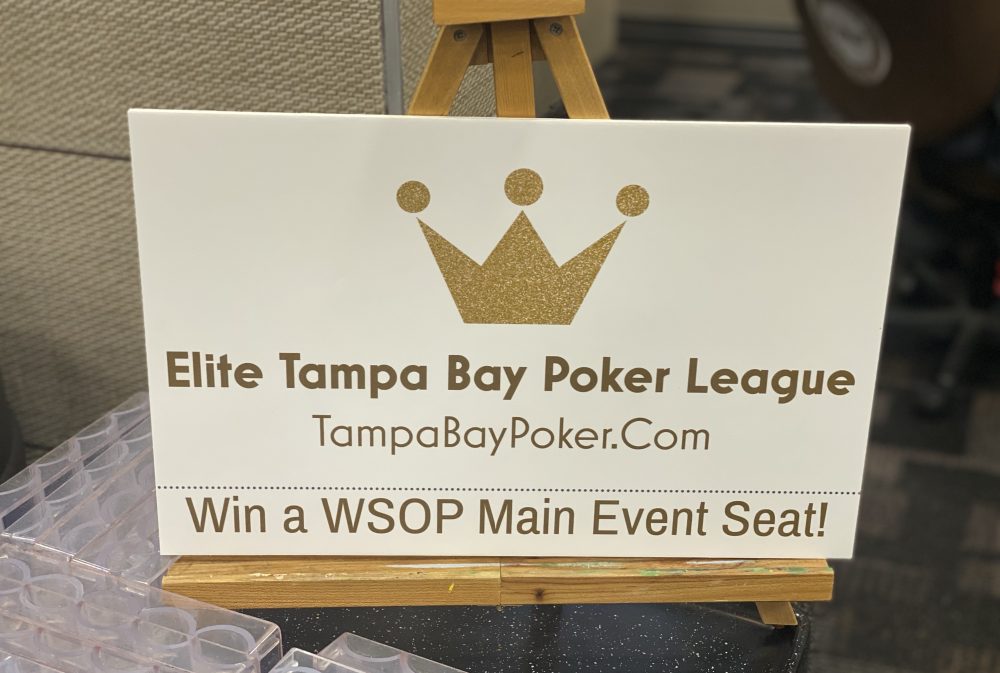 We had a lot of new faces this week along with former members from past seasons playing week one of the League! We have more planning to jump in before League registration ends on August 25th. Seats are still available but every week is worth a point in addition to final table points and you must play (or have one of your four allowed subs) 17 of 20 weeks. For full details see http://www.TampaBayPoker .com/about.

At the feature table early in the night new member Tom McDonald called Doc Brown’s shove and found out Doc had flopped the bottom straight. This was one of several straights for Doc.

Then there was more bad luck for Tom when Michael Dunn-another new member- hit a King high straight flush! No high hand but he did receive applause which is just as exciting.

Clive Gavin’s set of three’s bested Juan DaCosta’s KK for the knockout. Juan and Clive are back in the league after a season or two. KK had a bad night.

Craig Rice’s 66 >Clives QJo was good. Craig, a Derby Lane reg, is new this season. He realized that he’s more likely to win a 25-30 person league with generally $1000+ on top each week and 5++ $10k Main Event seats at season end than a 150 or so person Derby Lane tournament that you have to finish at least 3rd to win $1000. Variance sucks, but against the top quality play in the league its a lot less likely. Plus-free poker lessons!!! (See video later in the blog).

In a monster hand Mike hit his flush, tripling up. Craig’s 2 pair then bested Marsha Wolak’s Q leaving her on fumes. Marsha, well known in the area for her 1st place bracelet in the 2011 WSOP Ladies event, has had a prolific career ever since. Hopefully we’ll have even more ladies this season by the end of registration. Three played this first week.

After an early run up, Doc Brown was out and Joe “Kramer” Parrish won the pot!

Meanwhile at the outer table Jason Barnett sucked out on Ed VanLandingham, as usual.

Back at the feature table, Craig’s AK>Marsha’s JJ leaving her on fumes again

A full double for Mark Winchell!

Apparently Allen Wiseman, subbing for Steve Trizis, did not know that when Steve texts someone during a tournament they bust shortly after. Steve texted so we’re waiting to see what happens.

There was a long conversation between Jim Collins and Victor Iemolo explaining how a hand that Victor won was played wrong against Jim. Victor did win the hand but that doesn’t matter if it’s played wrong before the hand is won. Even though….he won the hand. That’s what’s really great about the league – the education we get. We include free poker lessons!

In the end, despite the previous win, Victor was out after Jim Collins called his jam with AQ. Since Jim won that hand it must have been played correctly.

Apparently Steve forgot that Allen was HIS substitute and did send the deadly text offering good luck, doubles and triples for a low fee of $10!.

Ed VanLandingham finished 9th before the final table was seated. He received his final table point for the 9th place finish as we generally play 9 handed.

Joe P was all in with AK but Allen woke up with AA, despite Steve texting him. Full double for Allen.

In a big hand Dave Bennett’s Flush>Allen’s set of Queens!

Joe Parrish was next -out 7th

A double for Austin

Clives flush knocked out Allen, playing for Steve, 5th and crippled Dave Bennett. Somehow Clive was able to stack those new Derby chips without them tipping over!

A triple up for Dave!

Were were three handed FOREVER. Here’s an Austin double. Eventually Clive, who had heaps earlier, lost them all and finished 3rd leaving Austin Fowler and Jim Collins to chop 1st place.

Week two is this Thursday, April 11 at 6:30. Come early to register if you would like to join our league – we had quite a line last Thursday!