Week 3: Jim “JDawg”Collins still tops the leaderboard after a chop with Ed VanLandingham! 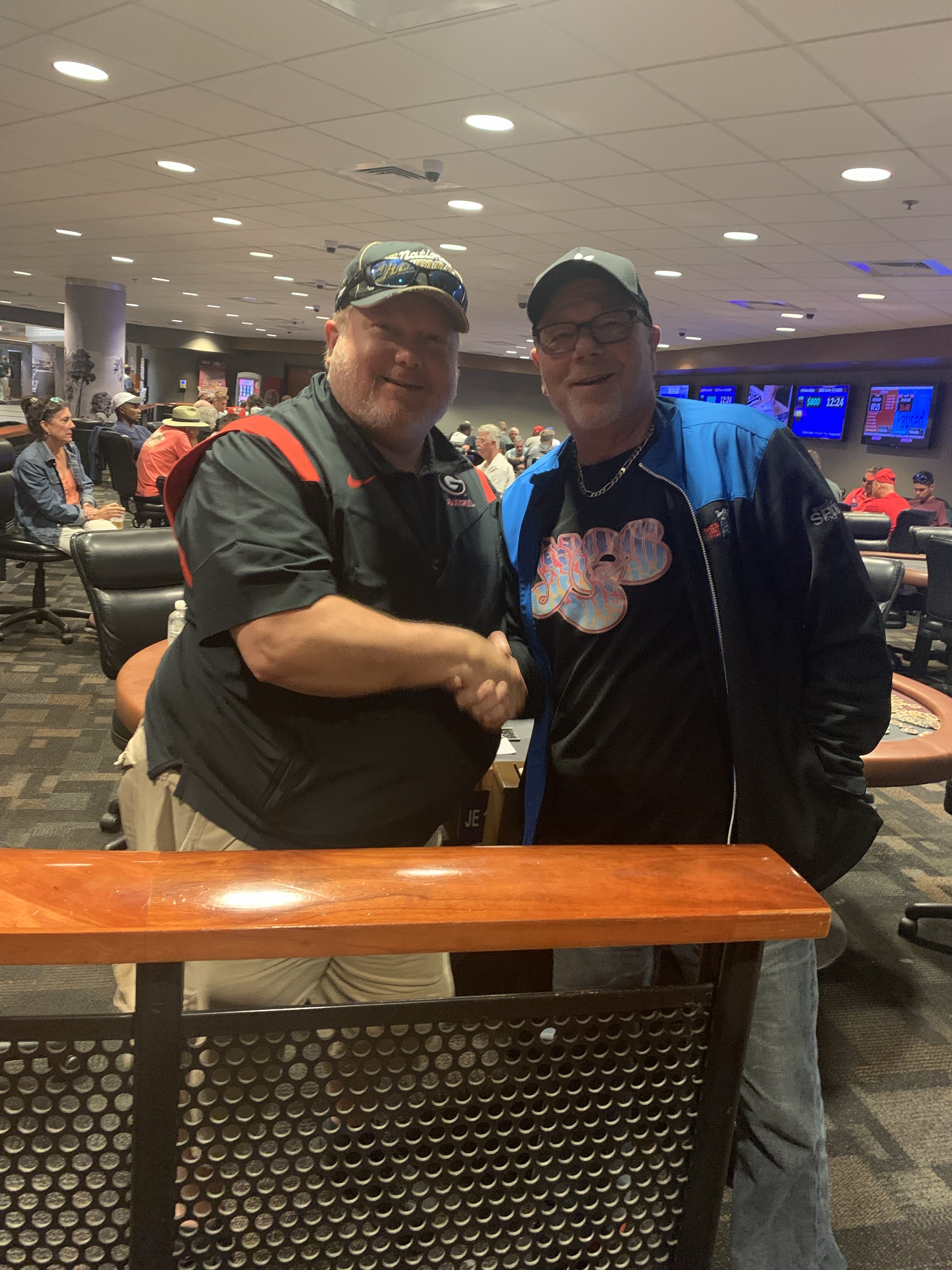 We now have 32 members! We’re expecting way more Main Event seats this season, especially if we keep having the amount of rebuys we’ve been having.

At the feature table a huge pot was brewing. John opened 1700, Eric rr to 3500 & 3 called. On a bricky flop it checked around. The turn was a 9. Eric bet 3500 and Andra jammed. All folded including Eric who lamented folding JJ. Andra later said that she had TT. Or did she?

At the outer table Alex Brown was playing for Doc Brown. His hand was better than Marsha’s.

At the new feature table, Jim Brinkley was out when Nick Zivolich had the best hand.

Jason Barnett’s 66>Marsha Wolak’s A8 for the knockout! Jason’s known for his online play.

Clive was talking about 63 being his favorite hand so New Jason Barnett tried it out. Successfully. Against Andra.

Clive Gavin shoved and Juan DaCosta snap called with KK. It was QQ v KK. The turn was a straight draw & potential chop but a Q on the river gave Clive the full double!

Clive raised, Victor Iemolo jammed , Joel Deutch jammed and Clive folded his JJ face up. An A on the flop sent Joel to the rail.

Andra, down to her last 5400 was all in. Juan called and flipped over AA. Clive had folded 89 leaving Andra in bad shape. She hit the case 8 for an almost triple up!

Juan, who was having big pairs all night but having some bad beats finally held with his QQ.

Joe Parrish was all in, Andra jammed about 15k that she had just won, , Jim Collins with heaps called. Andra had AK, Jim KQ, Joe 57ss. Joe flopped his 5 & some spades but Jim flopped the Q. Joe turned his 7 for 2 pair on the turn but Jim took it all with K on the river for heaps.

Dave Bennet’s AK> Austin Fowler’s AJ. Dave and Austin both represented the league in the 2022 Main Event and have high hopes to play again.

No Poker lessons this week but we did learn about Lasik….

Click “Are Victor and Jim actually Step Brothers?” and let us know what you think…

In two hands Ed VanLandingham knocked out Mike Dunn and then John Gordon in 9th before he could sit at the final table.

Steve tank folded after Clive shoved & he was told he couldn’t text Clive during the hand. Steve has a bit of a reputation for what happens to people when he texts them during a poker gam.

Steve’s A5o > Juan’s AQ to knock out Juan 7th. Another bad beat for Juan in a string of them this night.

4 places paid tonight with the top two getting more than $1000 each!

A straight for Steve after Jason flopped a set of kings

Good thing Steve folded – Ed had a Monster by the river.

EdQQ>Steve QJ
Steve was our 3rd place finisher. It’s for the best, we would never hear the end of it if he won.

Once Steve was out Ed and Jim collins called it a night with a chop. This solidifies Jim Collins on our season leaderboard with a strong first place after 3 weeks.