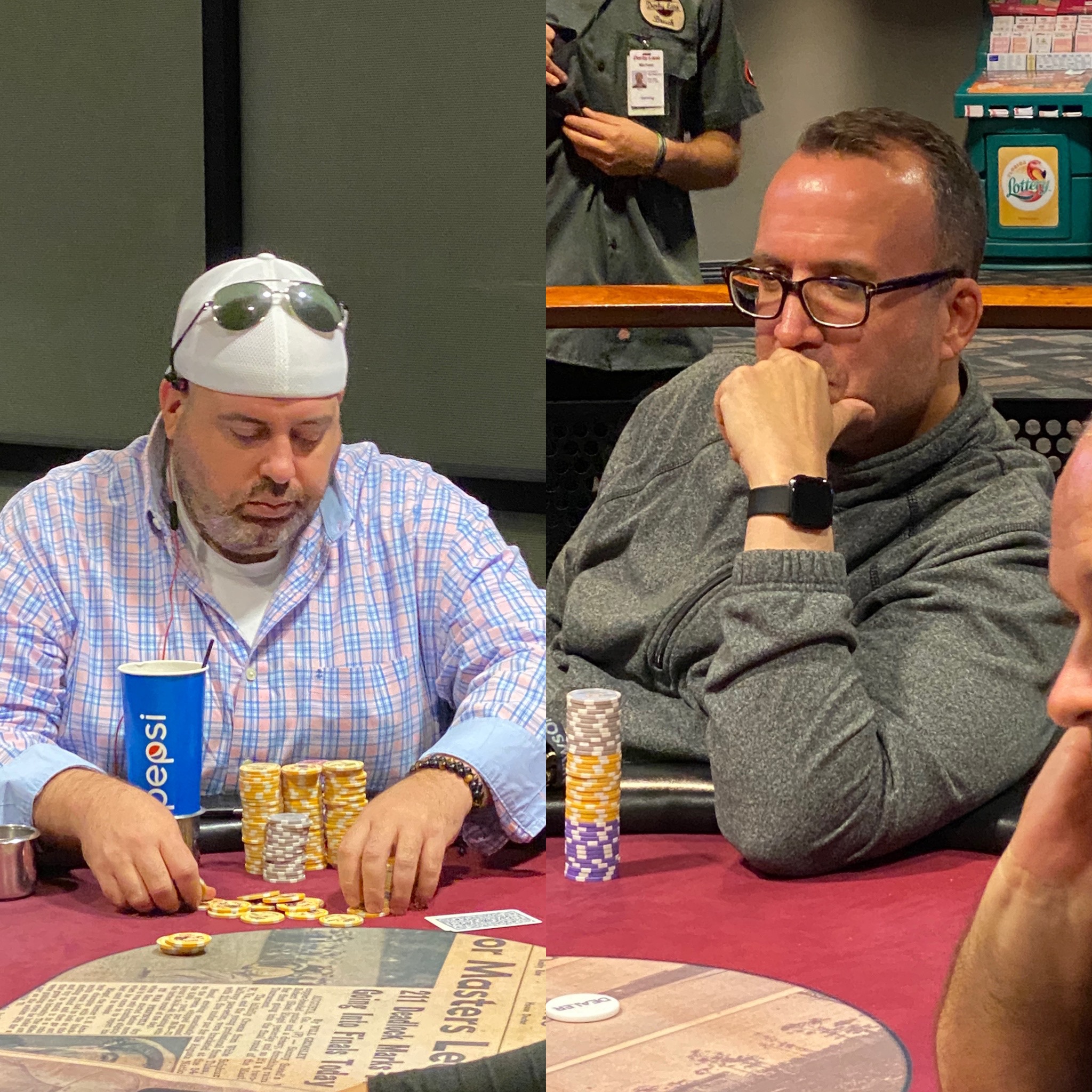 Despite the start during the holiday week, plenty of members – new and old- registered for the league during week one.  Quite a few additional members plan on coming next week as well and we should be looking at a 40 person roster if this season is similar to Spring Seasons in the past.  Spring season membership is generally higher due to the end coinciding with the start of the WSOP in Vegas.  The league plays 21 weeks ending before the end of May to allow for players who will be traveling to Vegas for the WSOP.

At the feature table in level one we had Ed Sojack with KKK over John Gordon with 777 putting a huge dent in Muscles chip stack.

Doc B AA>Clive QQ all in preflop, still in LEVEL ONE.  Did they notice it was LEVEL ONE?!

Level one was over… and it was noted at the outer table that Marv “Duckman” Karlins did not shove at all!

John Gordon 55>Clive Q7 while both short stacked due to those earlier hands.

And Doc Brown’s 35o sent Clive to the window

John then doubled up through Andra JJ>TT to build up his stack.  Andra had some chips so it didn’t hurt too much.

Doc B AT>John Gordon AJ rivered a straight for the knockout sending John to the window.  Doc Brown was certainly on a heater building a big stack through the night.

And Clive was out when Doc B bested Clives TJ♠️♠️

And we were down to 2 tables

Dave Bennett’s 9T> SuperDave AJ to knock him out

Doc B’s A5>Muscles short stack all in with  J7

Dave B > Herb for the knockout

Jake JT>Ed V for the knockout

Dave B faded the snap when Derek folded

We then had our final table with a mix of old, new, and returning from the past members including two of our WSOP Main Event seat winners from last season! (Jason and Andra)

What a good looking group of people!!!

Mark AT>Barry A3 for a double+

Dave Bennett’s AK>Andra 77 for the knockout.  at 2k/4k Andra raised, Dave reraised and Andra shoved preflop since after her initial raise she was pretty close to 10bb.  With 6 outs, Dave caught his A to win the hand sending Andra to the rail.

Derek AA, his second pair of Aces at the final table>Jason JJ to get the knockout.

Derek & Mo chopped when the board was better than both kickers…

Mark’s hand no good and he was out 6th

Barry 89♥️♥️>Mo KK when Barry’s flush held up and Mo was out fourth.

Derek was out in 3rd leaving Dave Bennett and Barry Jacobs, both with big stacks, to chop first place for week 1!