Spring League Week 2: Ruosi gets the win but Winchell tops the leaderboard! 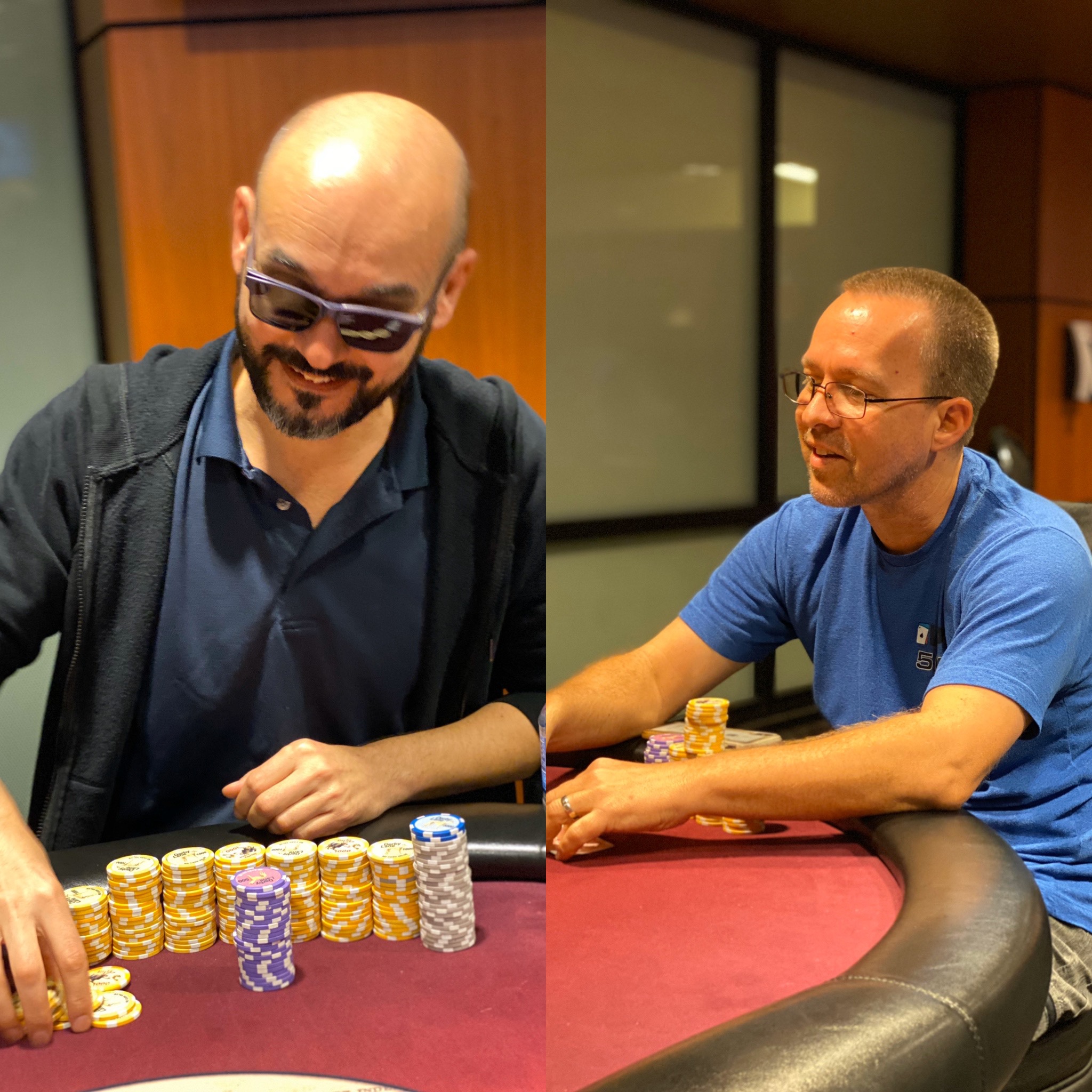 Meanwhile at the other Thursday tournament League Alum Mark Wiser got a Royal! Mark learned most of his poker skills in the ELITE TAMPA BAY POKER LEAGUE!

Steve Trizis, short stacked, shoved and John called (since Steve asked him to). Double Up for Steve.

Mark JJ>Steve KJ for the knockout

At the break dealer Nick sat at the outer table & picked up the dead stacks. Eric Buel took it personally when he included his…

No callers for Dave B’s all in. He turned broadway.

Another short stack, Mark Winchell, got another one through

Then is was Muscles turn to get one through…

Steve Trizis’ shitty A5 bested Andra AK, Garth AK to stay alive!  It was determined that Steve Trizis is a “luck box”.

Andra Zachow’s  77>Steve’s  89 to double her short stack.  Andra is notable in the Tampa Bay area for being a “short stack specialist”.

Andra QT>Dave AK for yet another double up!

After Darryl bubbled at the outer table  we had our final table!!!

What a good looking group of people!

Mark shoved and got it through

Then Dave B got one through shoving with JJ

Andrea 66>Dave B A7 to knock last week’s winner out!

Mark KQ > John QT for a double up

SuperDave Kaucher J9 >Rob Benford A8 for the knockout

Mark AQ>Andra A7 😢 for the knockout and a spot on the couch later that night.

Mark FH> John “Muscles” Gordan trip 8s.  When the 8 came on the river there was no getting away for John.

John went off a bit….

….and then there were three

And the winner was…..

The Final Table in order of finish was:

Week 8: Peter Pompeii is our winner
1
Week 7: Shawn O’Brien gets the win!
2
Week 6: Bad beats, more substitutes and a win for Eric Buel!
3
Week 5: The Substitutes
4
Week 3: Jim “JDawg”Collins still tops the leaderboard after a chop with Ed VanLandingham!
5
Opening Night Chop!
6
Two weeks at the 2022 World Series of Poker
7
Two ETBPL Alum have made it to day 5 of the Main Event!!!
8
WSOP 7/6/22 flight 1D!
9
Week 20!!!! Austin Fowler is our Grand Champion! Five ETBPL Members playing the WSOP Main Event!