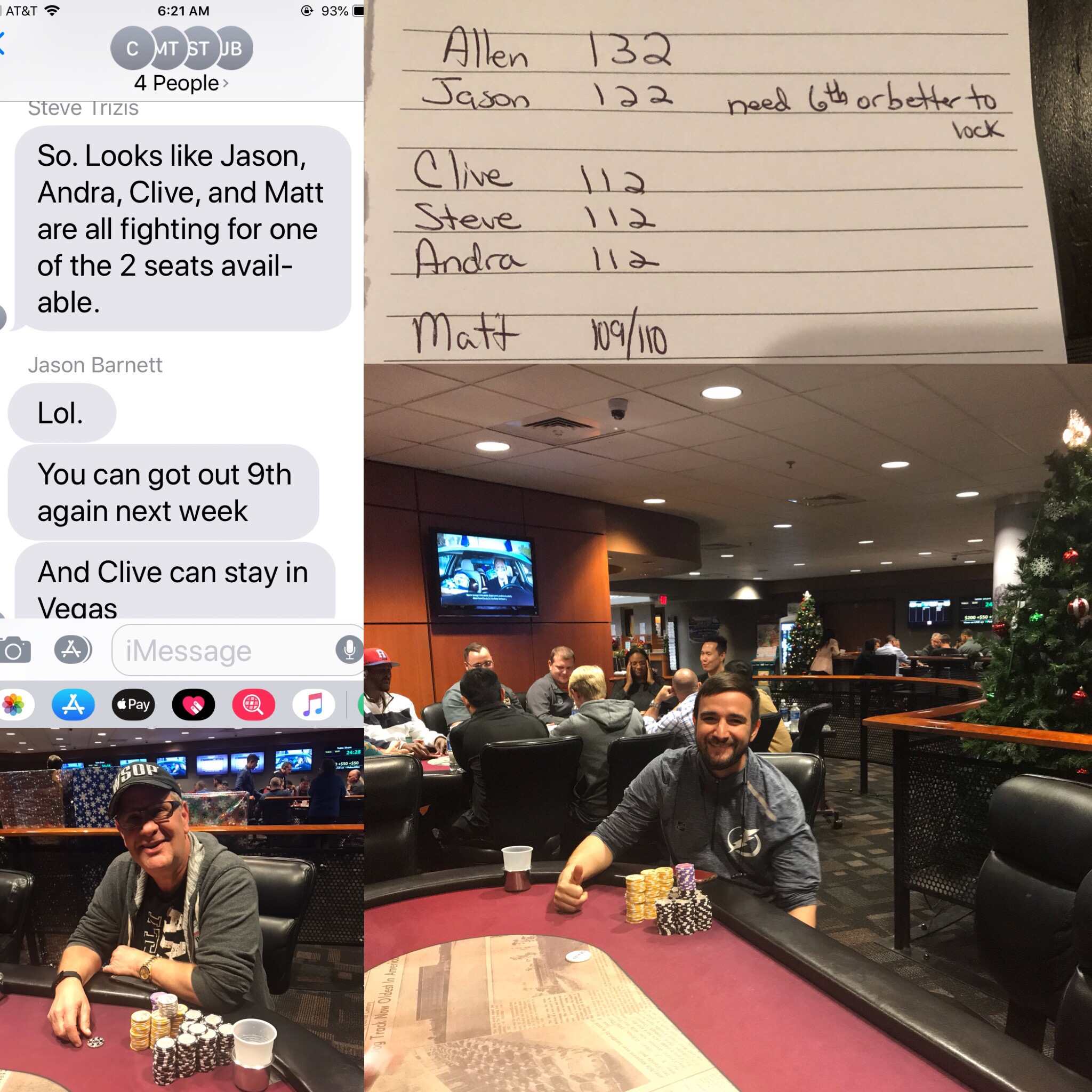 Players excited for the night’s play!

It was beginning to look a lot like Christmas at Derby Lane Thursday night after the Thanksgiving break. Most of the dealers wore Christmas themed Shirts and at the window the tournament tickets were printed by a man wearing a holiday sweater with cat ornaments decorating it.

Christmas came early for some players. After a rough start when Bob’s semi bluff  hit a straight on the river and caught Andra as well as some other unfortunate hands, Andra declared to Allen Wiseman that maybe she’d just start playing sh*tty hands.

Andra 88>Steve KK when she refused to folder her sh*tty hand and rivered the straight! 88 isn’t really a sh*tty hand but compared to Steve’s KK it was. Andra went on a heater after that and was up to about 50K+ by the break. She came into this week in 5th overall and needed at least a third place finish to crack to top 4!

Clive who went into this 2nd to last week in 3rd place overall on the leaderboard was shooting for a win this week to clinch a Main Event seat so he could skip next week and enjoy a week in Vegas.

Matt AJ>Clive KQ To put a damper on Clive’s plans.  If he misses next week he can’t get a main – that one point will make a difference.

Chrissy, short stacked, was all in for 1400. Steve & Ann called, Chrissy gets the full house!

Then Chrissy Flush > Sherry to double!

And Chrissy had built her stack back up! From 1400 to a stack that lead her to the final table.

Matt>Clive for the knockout! Clive will now have to fight for a Main Event seat next week!

Ann was short when she looked down at her hand and saw Aces! Ann AA>Steve KK – nice timing for a double!!!

Matt K9>Ann AK for the knockout!

Meanwhile at the outer table…

Matt QQ> Bob 88 To knock him out 10th for the week.  This was the start of Matt building up a huge stack.

Doc A3>Gene A5 For the knockout!

Doc QQ>Mark TT for the knockout!   Doc Brown’ stack started getting big and Matt had his work cut out for him.

Matt JT>Rob for the knockout!   Rob needs a good finish next week – he’s definitely not out of the mix.

Doc K9>Chrissy 77 for the knockout!

Matt AK>Allen A9 to knock him out in fourth.   Andra breathed a sigh of relief – this moved her up to top 4 and a chance for a Main Event seat next week!

After Doc Brown knocked Andra out with A3>K3 (she was at about 3 big blinds at that point) we were down to two. With her third place finish Andra is now tied with Clive & Steve on the season leaderboard – and there are only four Main Event Seats! Next week, the final week of the season, will be very important!

Matt & Doc Brown then agreed to chop first place which will move Matt up to 6th place overall and within reach of a Main Event seat if he can pull ahead next week!   Will that chop instead of outright win matter?  We’ll find out next week!

Members were busy calculating the leaderboard manually as the players were being knocked out. The only member who is guaranteed a Main Event seat at this point is Allen Wiseman. It will be a battle next week for the rest!