Week 19: Jason tops* the leaderboard with a chop with SuperDave! 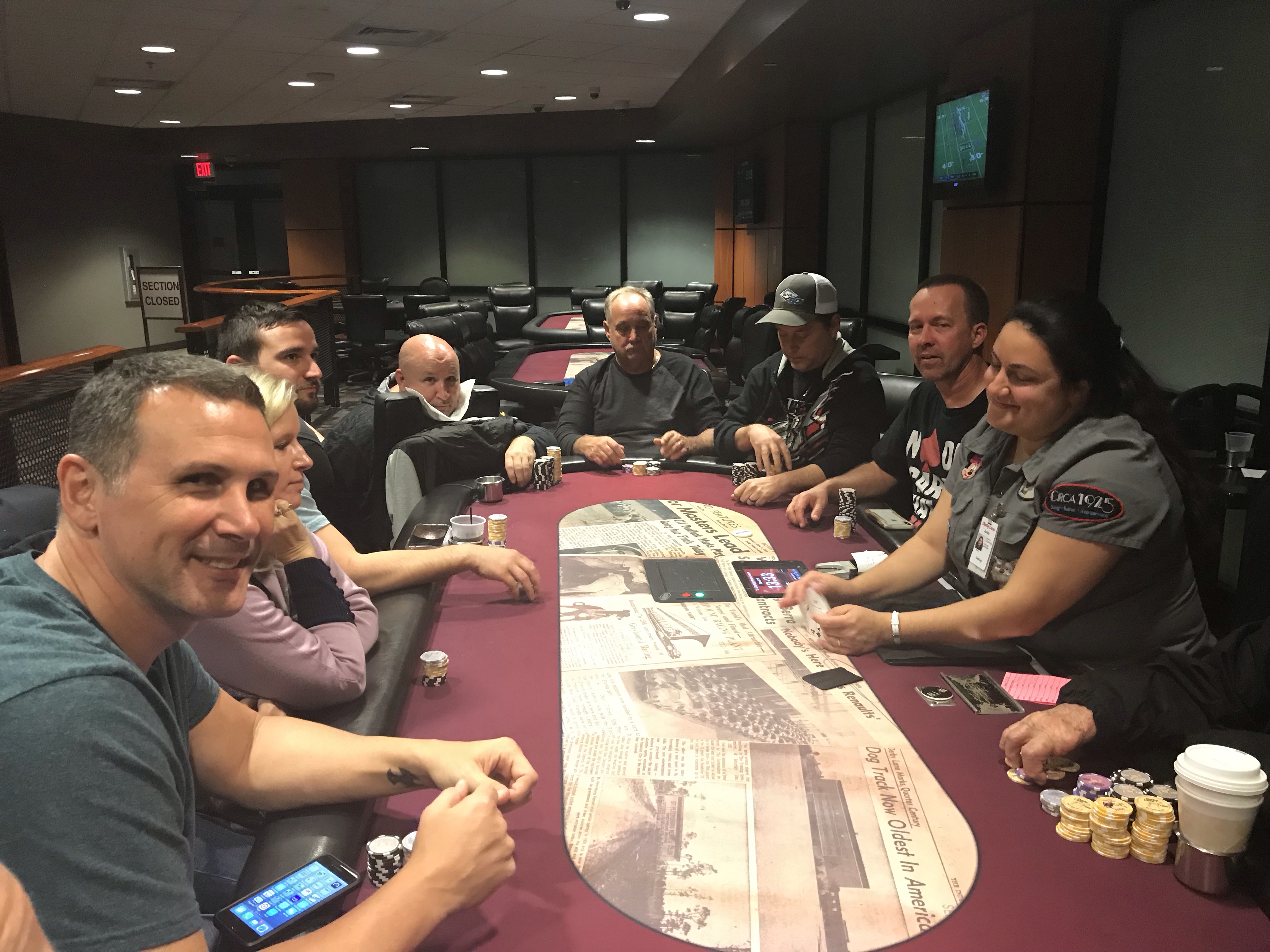 Jason Barnett is back in a familiar place – topping the season leaderboard *tied with Allen Wiseman.  One of the short stacks at the final table he came back with a vengeance!   Jason and Dave Kaucher chopped 1st this week.

Next week is Thanksgiving and an off week for the league.  May everyone have a Happy and Healthy Thanksgiving.

With two weeks left and 32 points up for grabs along with the freeroll on December 19 a package is still possible for all qualified league members!  members must play 16 weeks and 3 of the last 5 weeks to be qualified.

The League isn’t just about poker, it’s also the social aspect and camaraderie between the members.  The engaging conversation is amazing and we learn a lot from one another!

At the feature table it was Andra AK>Steve AQ after his request that she fold pre-flop failed.

Fil/Kenny (Fil 2.0) 33>Ann KJ.  Kenny filled in for Fil this week while he is recovering (a special member approved situation), the league members are eager for his return and he is in our thoughts <3

At the outer table SuperDave>Alan

Allen got the knockout with  TT > Ann T6cc

Jason KK>Ed A5 for the knockout

Gene Ak>Clive A9 for the knockout!

Jason QQ>Sherry AK > Andra A2dd  Bad timing by Andra shoving on the button and Jason wakes up with QQ, Sherry with AK….  Andra out 7th and those points have moved her into a tie for 5th place on the leaderboard!

Midnight 6 left!   This was the longest night in quite awhile – with only two weeks left everyone was here to win and you could see how important those points were to everyone.  Play was a little tighter than usual.

Jason AA>Mark AT for the knockout.

With his chop for 1st this week, Jason is now tied for 1st with Allen on the leaderboard!   Jason has 12 final tables so far this season.   Dave Kaucher has moved up four places with his chop.  Allen Wiseman is still tied for 1st and is one of the few members with no rebuys this season along with Ann Gove, Mark Winchell, Bob Scholz and James Palmeri.  Rebuys were allowed this season (single rebuy only until the first break) to allow for more packages ($7600 so far through week 19) and for those early level bad beats.