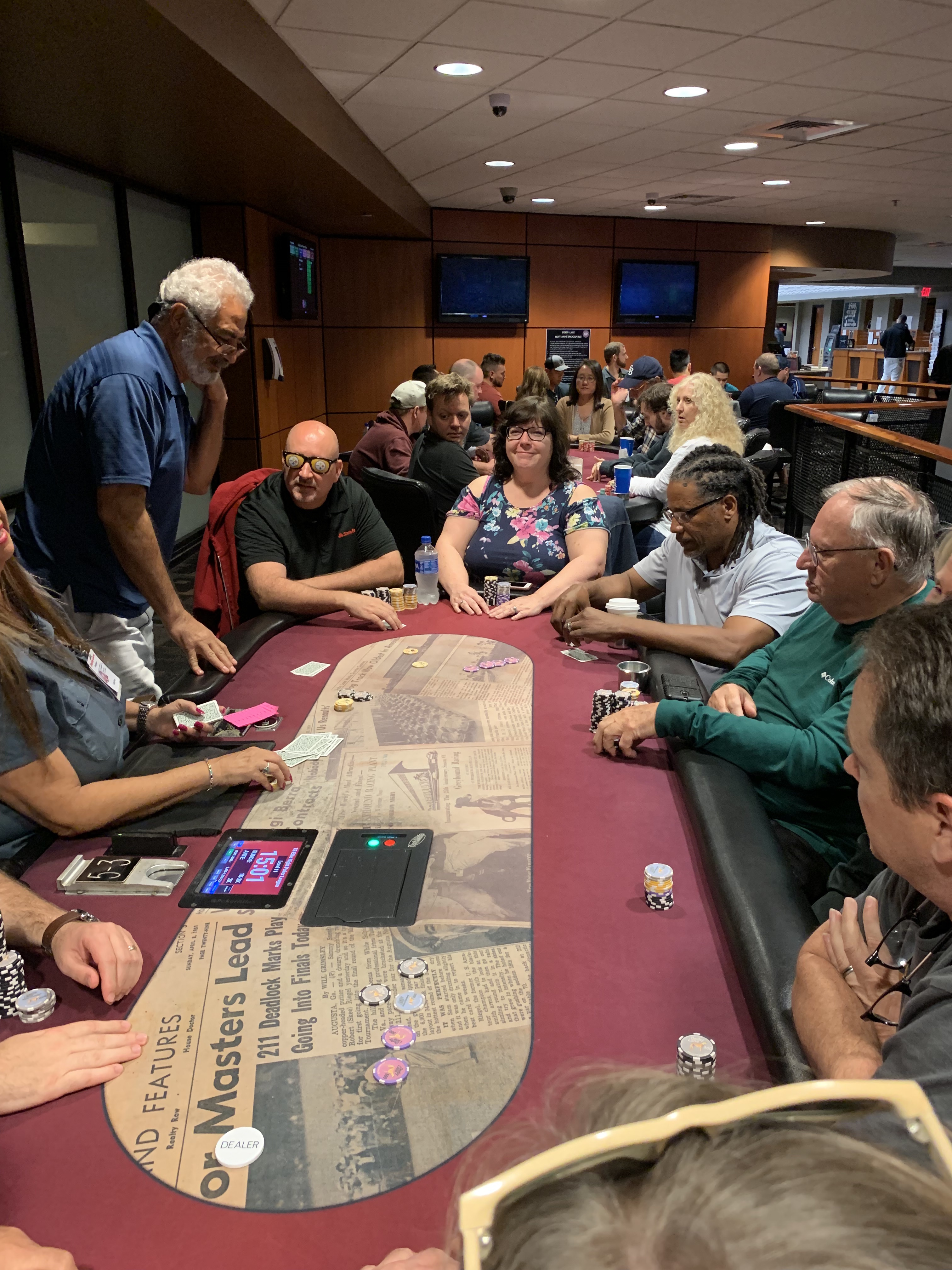 The new season of the Elite Tampa Bay poker league at Derby Lane has begun and we have some familiar faces and some new.   Quite a few will be joining next week as well.  With 16 of 21 weeks required to qualify membership is still open for approx. a month to meet that criteria.  A point is earned for each week of play so the sooner the better!  If you are interested please see the about page for details – the spots will fill up fast by next week

Andra then lost 4300 to Dave. He was All in preflop short stacked after the previous hand and Andra had AK and enough chips.  🤷🏻‍♀️ SuperDave had 88 and flopped the 8

Fil then had AJ to knock Sherry out

Later Trey, who had his second Main Event cash for the league this summer, had 55>Jerry’s AT, Muscles folded 88 after checking Trey’s pulse to determine if there were any tells. The fives held.

When Steve “The Godfather” Trizis was all in. Everyone folded in fear.

In another hand Trey raised to 2K, john & Steve called. Andra 3bet in bb to 5K and had 2 calls. John calls for an 8 high flop, it came J8x. Andra shoved and they fold and her stack was growing. Later the hole card camera showed her 88. Sh

Clive then had 88>Muscles AQhh for the knockout.

Juan had a much needed Triple up!

Chrissy Kings full > Ed AA. Chrissy asked Marlou “A King please” so he gave her one.  Who could say no to Chrissy?

Fil, Allen and Andra had substantial stacks – $100Kish give or take when Andra pulled a fast one.  at 2k/4k Andra limped 4K with AA along with several short stacks preflop hoping one of them would shove.  Instead, Fil made the squeeze with his big stack by going All In.  Andra quickly called and doubled up leaving Fil with fumes.

Chrissy and Fil were the only remaining last longer participants and Chrissy, who had given up hope, had a chance.

Battling for the last longer, Chrissy dreaded seeing Fil chipping up his stack.

By 1:20am, getting nowhere and with somewhat close stacks, Andra and Allen decided that they were too old for this s&$% and decided to chop and head home.