Week 2: New Members take it down! 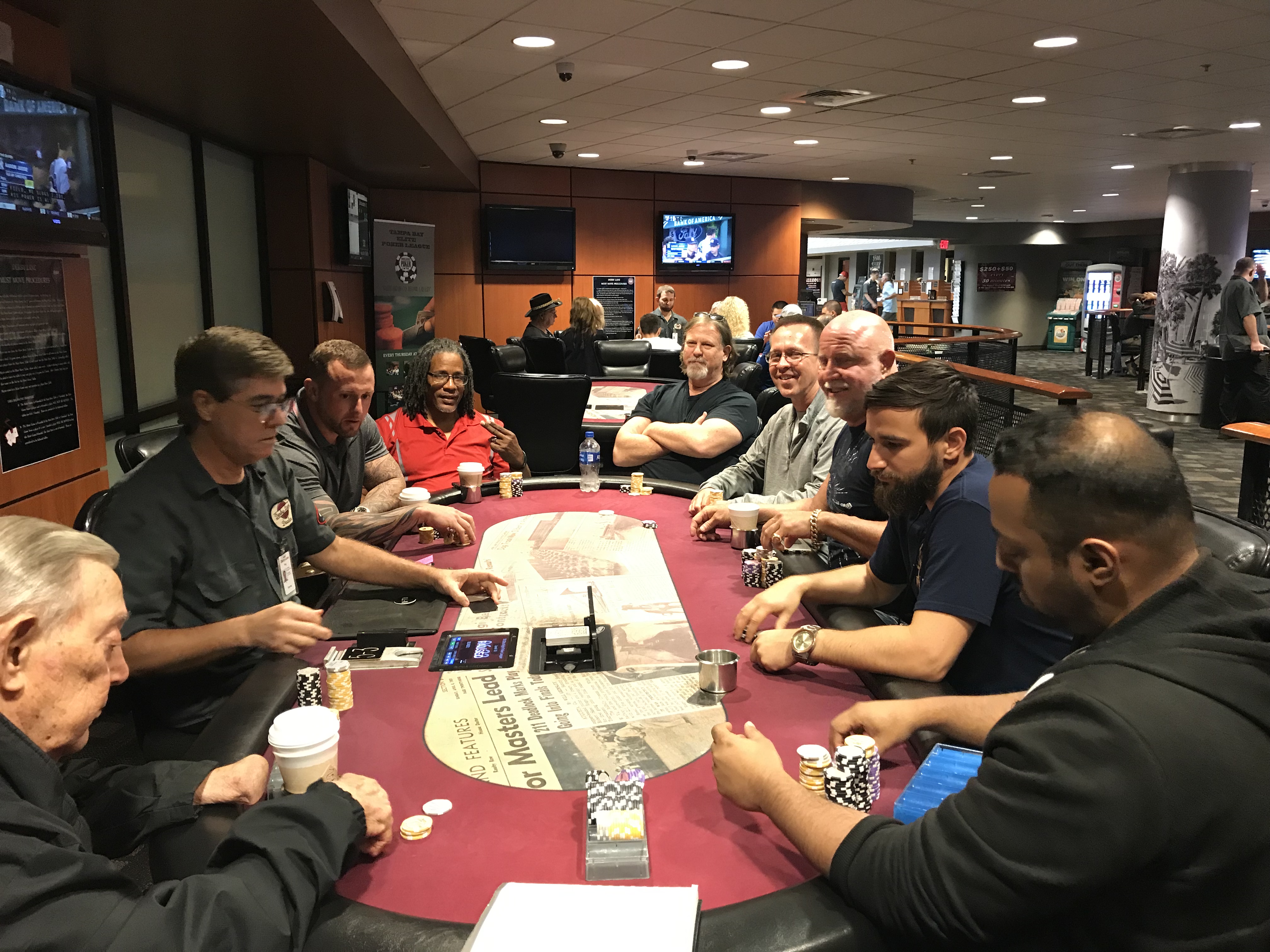 This week started with some good conversation at table 12, the feature table. Allen Wiseman was clearing out bookmarked pages from his phone while he waited to get a decent hand and happened to see a word of the day that he had saved at some point.

The table discussed that this is a great word for poker players – you know those players – the ones who decide to hold their own master class at the table. Fortunately we don’t have that at the league, another great reason to join! There are a couple more weeks to join, but with one point per week for attending, the sooner the better!

Solar girl had a meltdown after a bad beat by the new Ed sent her to the rebuy window.  She rejoined at table 12 where she intimidated the whole table by breaking a metal cupholder.  Frankly, it was terrifying.

Immediately Chrissy found herself all in versus Allen Wiseman.  She was dismayed to see that he had TT but with the flop giving her a straight Chrissy was well onto her way to building not just a stack but a wall that lasted to the final table.  Chrissy AK>Allen TT

Allen was then all in with his remaining 3100 with 9To.  Andra called in the big blind with TJo.  Allen Flopped a 9 and doubled up.

Meanwhile back at the feature table Andra AA >Fil TT when she had about 4200 and needed that double.   Then Andra’s TT>Fil’s 8x for the knockout after Fil jammed the flop that contained an 8.

Back at the outer tables….

SuperDave A3>Sherry 88 for the knockout

Andra, on fumes,  A2hh>Muscles 78 when she rivered trip twos for much needed chips.

In one of the biggest hands of the evening and the new feature table we had:

SuperDave who had caught his flush on the turn!  Double knockout for Muscles!

John then bested Jason’s A5 when he caught a straight

Muscles then knocked out Andra when his 2 pr after the flop > Andra flopped top pair after the flop. Plus he rivered a full house to show hot he was running.  Andra was our bubble girl this week after her amazing and well deserved 1st place chop last week.

We then had our final table!

There was some major trash talking going on at the final table.  Twitch to Muscles: “I’m shaving my head & getting a spray tan & I can go as you for Halloween!”

This was the final table that would not end.  The short stacks were doubling up constantly!

The 4th short stack to double

Gene doubled with A5 versus Alan, a solid new player to the league with a big stack had 99

Jerry Q8 > Juan A7 all in pre flop for the knockout

Chrissy doubled with less than a big blind

Derek AQ>Chrissy QJ for the knockout

Eugene all in for less triples ++ with his K

Mark KK>Jerry AK with a FH on the river for a double up!

Eugene gets AA in a 3 way pot with Derek & Twitch

Down to four players Mark K5hh>Jerry 33 to survive.

And then there were three!

In a huge hand Jerry Q8>Mark JT to get his stack back.  Mark flopped open ended and turned the flush draw but couldn’t get there.

Special recognition to Chrissy, Juan and Twitch who have made 2 of 2 final tables so far this season!  Final tabling consistently is the key to winning a package!  Winning is nice but consistency pays off!