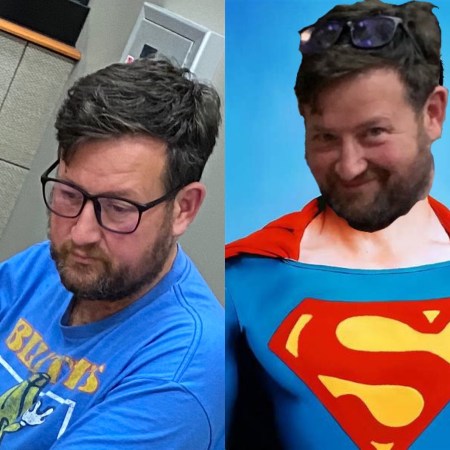 We had two substitutes this week: Kenny O’Donnell playing for Andrea Ruosi and Chrissy Holubeck playing for Marv Karlins. It took awhile for the league to realize it was Kenny who is a notable area player. He was wearing glasses so everyone had their guard down as they thought he was just “Some Guy”. As the night wore on the players realized that they couldn’t win. It wasn’t “Some Guy”, it was Ken f***ing O’Donnell. Game Over.

At the feature table, 100/200 blinds, 4 players called Andra Zachow’s 500 open. On a 822 flop, Andra bet 2200 chasing everyone out except Jeremy Becker who is still stinging from a triple barrel at the hard rock at least six weeks ago. Andra declared a “down bet” (2000) when the turn was a T. Jeremy called, but was worried (at least that’s what he said). Andra declared another “down bet” (she checked). Jeremy called her check and they both flipped over 99.

Jason check called Andra until the river when he bet, hoping Andra had the Ace. She didn’t and folded. Jason showed quad fours! Too bad no high hands in the league, quads twice so far!

Jeremy, short, was all in on the turn. Dugg Hadden called with AA but Jeremy had turned trips.

Andra had the third quads of the night at the feature table.

Andra, with KK again shortly after her quads , was all in. Dave Bennett, new to the table coming off of his win in the Derby lane accumulator, called with AQo. KK held for a double.

Dave Bennett was all in and several Kings later got his double.

Right before the break Ed VanLandingham was in a hand with Jeremy blind versus blind. Jeremy may have raised and Ed called. Ed did not look at his cards. He had AA for the win.

A double for Ginger Dave!

Derek Worley was out when Michael Laake’s A was good.

Jacob was the first one sent to the rail, out 9th.

At this point of the evening Kenny O’Donnell, who had been slowly building up a big stack, took his glasses off. Everyone finally realized who it was and they were terrified. He then took out Jordan in 8th. Jordan shoved after Kenny c-bet the flop with JJ with a set.

Chrissy was then out 7th. Her AK lost to Kenny’s K8cc when Kenny turned a flush after Chrissy flipped an Ace.

Jeff Gordon was out 6th. He was all in as the big blind for 3k. Super “aka Dinner” Dave Kaucher was in with K3cc against Jeff’s J8. Dave flopped a 3 and it held.

Kenny knocked out Matt Trizis 4th. Kenny jammed T8 in the small blind. Matt called with AQ and they both hit a pair on flop. Kenny ripped Matt’s heart out with the second pair on turn.

Jason Barnett was then out 3rd. Jason shoved on the button with TT. Kenny called in the small blind with K9. K on flop.

Kenny O’Donnell and the formerly SuperDave Kaucher heads up. Kenny, of course, with heaps

Kenny takes out Dave. Dave jammed into Kenny. Kenny calls with AK. Flops Broadway. Dave announced “I’m not drawing dead” since he had a back door flush draw. But he did not improve.