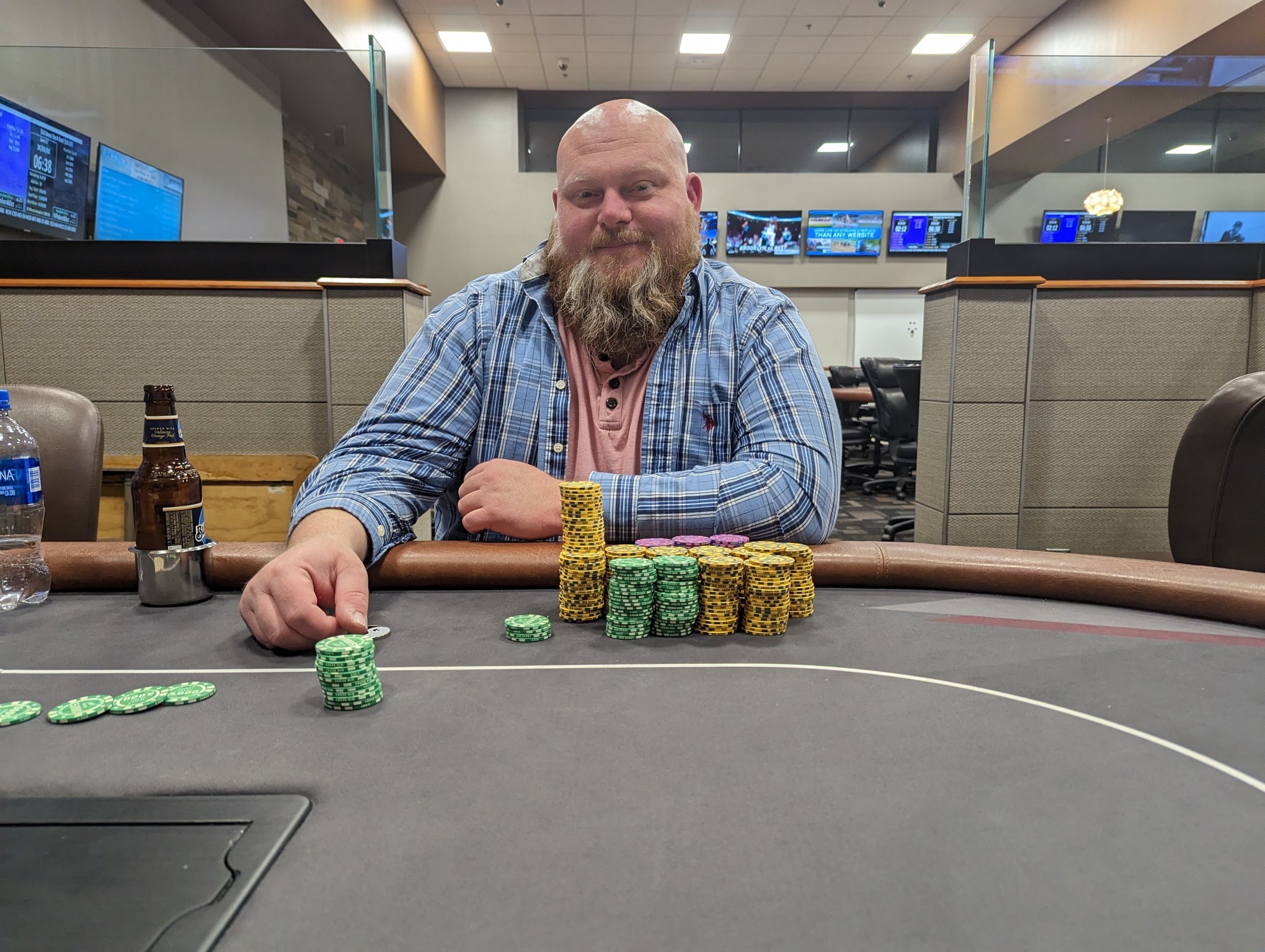 Week 15 found Peter Pompeii on top! Peter is a new member this season and is in great shape holding 10th place after moving up 5 spots. We’ll have at least 7 Main Event seats plus minor seats with leftover funds. With 5 weeks left in the season no one is out of it yet as long a they meet the attendance requirements! We are averaging 31+ entries per week! Our new season starts Thursday, January 5th! Week 16 will be Monday, November 21st as a hurricane reschedule date.

Following is the details of the evening:

3way All In on the river and Peter’s flush was best!

At the feature table, Table W4, nothing much was going on, but we heard all sorts of shenanigans at table W8 & beyond where it seemed to be a revolving door.

At the feature table Jason Barnett was all in and Clive Gavin snap called. Jason got the knockout Nut flush over 2nd nut flush.

Back at the out tables Tom McDonald JJ > Peter’s AQ
Tom doubled up putting a slight dent in Peter’s monster stack.

Marsha Wolak then had AA> Peter’s 99
Marsha doubled taking a bit more of his stack.

GingerDave Miller chose to fold to Ed VanLandingham’s aggression after tanking five minutes. The clock was called and he finally found a fold.

At the feature table Eric Buel, after lamenting his short stack after rebuying, was all in after the tables combined and Dave Bennett was moved to the table with two racks of chips.

Dave hit the straight but Eric stayed alive with the higher straight. A Christmas Miracle.

GingerDave was moved to an outer table to even the tables and apparently he busted before he actually sat down!

Juan was all in pre flop & doubled through Brett Pope!

The first hand of the final table.
66 Nick UTG jams
Bret call in the BB

Nick with flush, Brett A6

Joe Parrish all in A8
Vs
Juan DaCosta A4J

Joe, still tops on our season leaderboard, was out 9th

Nick, who has been final tabling strongly most of the season was out 8th opening the door for his team member Cecil (They are teaming up this season to count as one member – the one with the most points – if they win a seat – plays the Main Event).

Jake Naumann made a straight flush and made nothing!

Ed VanLandingham bluffed it off on the river vs Pete. Ed out 6th

Brett got coolered, all-in on turn to bust 5th to Peter Pompeii

Marsha busts to Dave Bennett, K3<AQ when she got short

Missed the pic but Pete busted Dave in 3rd when Dave got short and got it in with a straight draw vs Pete’s top pair.

Jake bluffed it off on the turn and Pete made the call. Big win for Peter Pompeii who will move up the leaderboard along with Jake.