Tom McDonald has heaps in an Amazing Spin up (odd) and Peter Pompeii goes Mt. Vesuvius on Everyone all night so they Chop week 2. 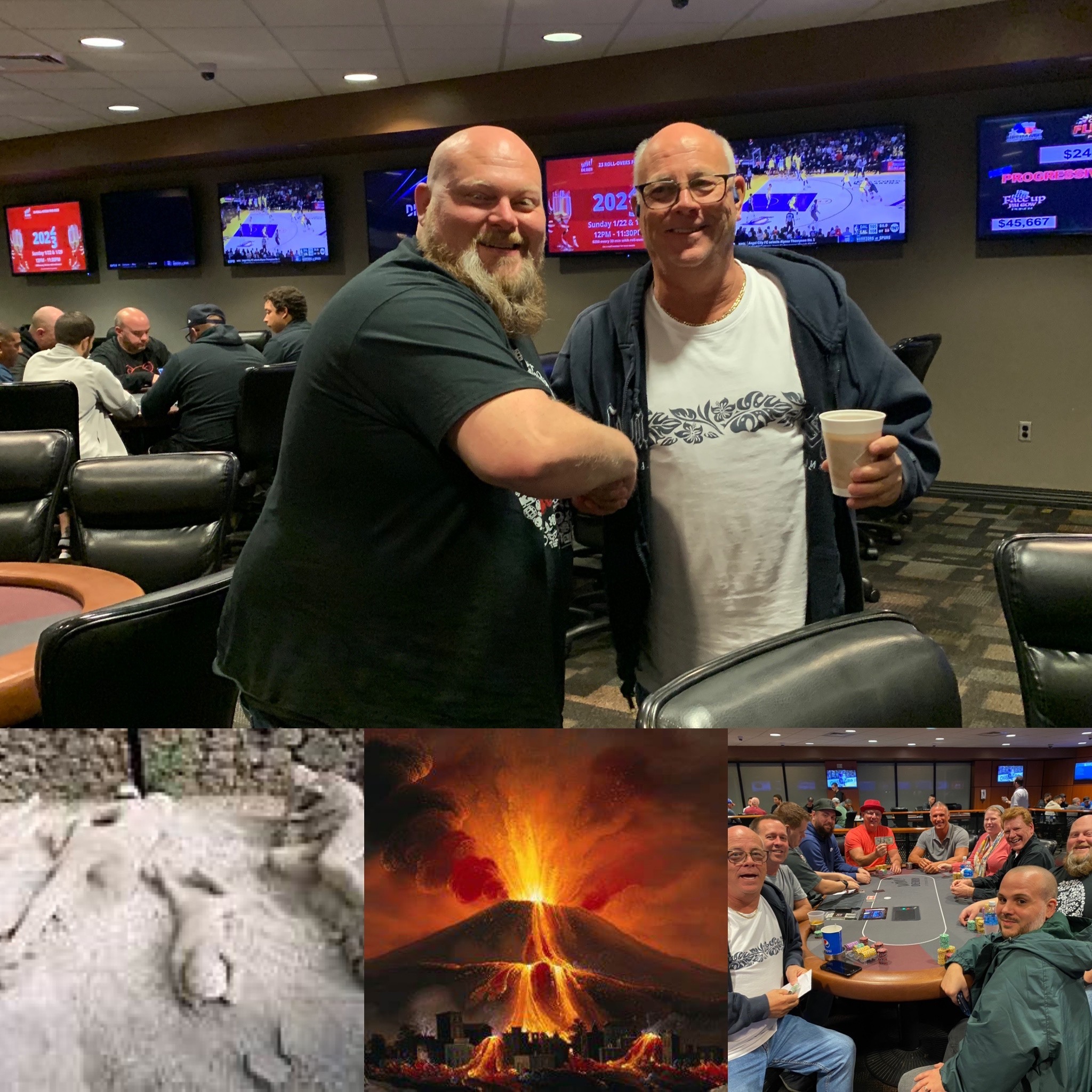 Steve Trizis couldn’t get Todd Rivers to call his 3500 on the river when he hit his quads. His “6 high flop” request was a ruse.

RedHatDave hit his flush and Brian Fuchs was out.

Steve’s horseshoe was too strong for Mo Maher & his TT. Steve did seem to have some discomfort while sitting….

Marsha and Jeff all in post flop A8>A7. Jeff put the pressure on Marsha after her big bet and shoved. She didn’t believe he had the A and called. She was right that he didn’t have a monster but it was enough to beat her A and she was sent to the rail. He’s awfully tricky!

Down to 2 tables Nick Scholz doubled up Tom McDonald. It took a little longer than usual for Tom to build a monster stack, but it was bound to happen.

At 600/1200 Peter Pompeii opened 3500, Andra jammed 7500, Tina called and Peter called since Tina did. Tina shoved the flop, Peter folded. Tina sent Andra to the rail after hitting her K.

Noone had a heart so Jason Barnett’s set of Queens took it down! Jason QQ > Marie Harrell A4 > Jason Palacios 96ss

A chop for Tina Pridgen and Peter Pompeii when they each ended up with 2 pair and an A kicker despite Tina’s J kicker being better than Peter’s T. Peter was putting the pressure on Tina all night and she was ready to win a big one against him.

At the outer table – All in on the river. Peter shoved 23o and Clayton called with KJ. Ouch – Peter had a wheel on the river.

Peter Pompeii was feeling frisky, God like or knew he could do whatever he wanted with his Monster stack and jammed the button. Jeff had AK and snap called. Peter said “oh no, you got me” and turned over 82…….. AK no good for Jeff who had a lot of chips at that point and was sent to the rail.

We had our final table! Mark Winchell 2 for 2 final tables while the rest had not made one last week.

A double for GingerDave Miller!

Peter rivered his A to knock out Nick 9th who is teaming up with Jim Collins this season. Jim won a Main Event seat last season and joining forces with Nick this season to allow for each of their scheduling conflicts to meet the 18/20 week attendance commitment. Theleague allows teams but does not get involved in the arrangement. No substitutes allowed for teams.

Jason Barnett>Mark Winchell for a much needed double up.

RHDave >Austin who was out 6th. Austin played the Main Event this past summer for the league!

Jason Barnett doubled through Peter! Twice! Was there a chink in the armor???

Huge double for Tom through Peter AQ>88 Tom does this a lot.

RedHat Dave was out 4th – another victim of Peter

Registration is open through January 26th (if capacity not reached next week). If you do register these next two weeks be aware that you must play or have a substitute (6 subs max) 17 of the 20 week season.