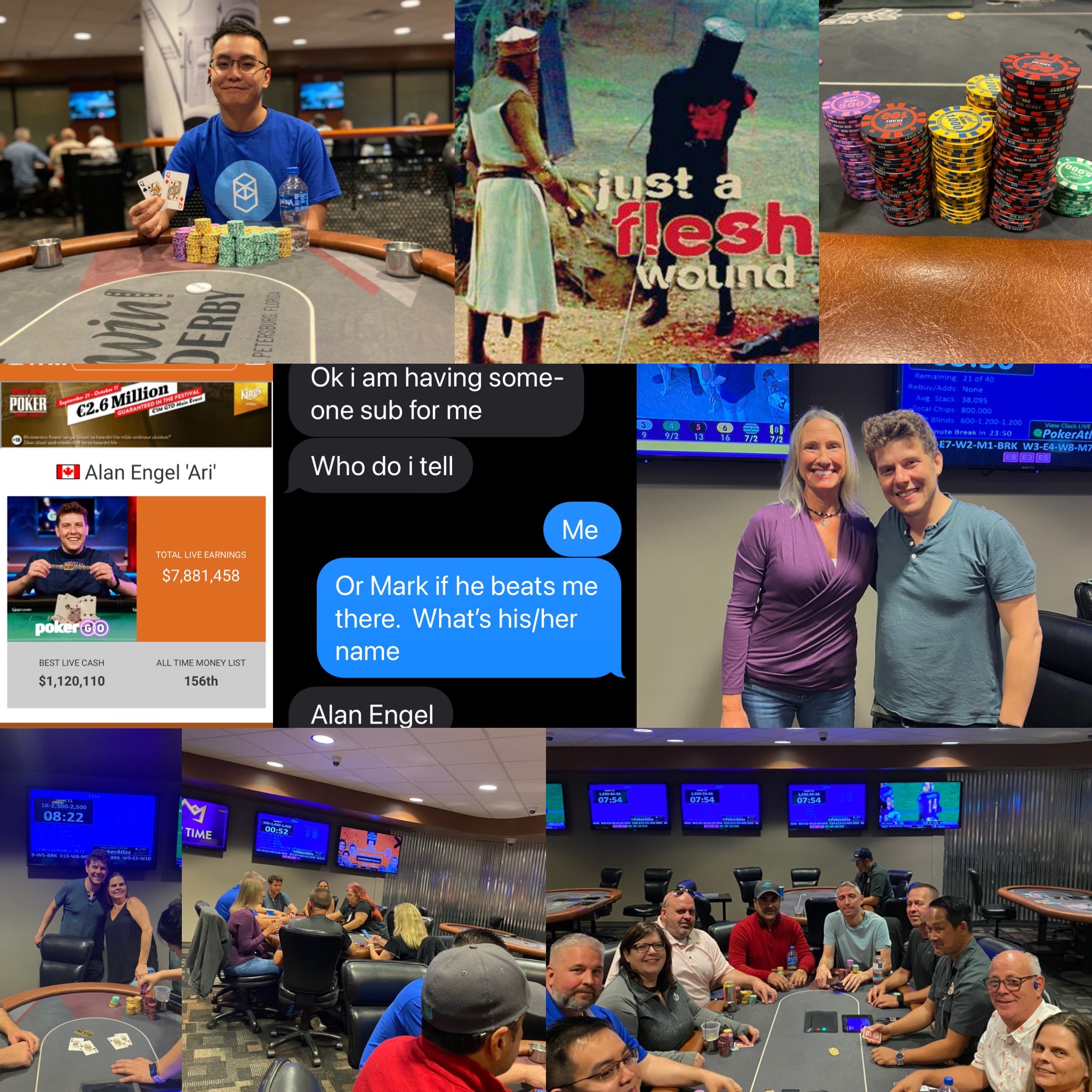 So, he’s played with the rest, and didn’t want to pass up a chance to play with the best. The league had a surprise substitute when Ari Engel showed up to play as a substitute for Joel Deutsch!

One of the first hands of the night Ari Engel, playing for Joel> Juan DaCosta.
AA>KK All in pre flop sent Juan to the cash games for the night.

At the outer table Steve Trizis’ 3rd hand of the night he figured his ten was good. The flush was better.

Back at the feature table before any flop, Mark Winchell opened 800, Shawn O’Brien reraised 2000, Jim Collins made it 5000, Mark folded, Shawn ripped 20k, and Jim called for less. Shawn’s AKo>Jim’s TT for the knockout. Things escalated quickly at the feature table with big bets, three bets, etc. in the early levels. This was possibly in reaction to Pro Ari Engel being at the table. The league members kicked it up a notch.

Jim Brinkley was Shawn’s next victim.

At one of the outer tables Jacob busted his third hand. Jake’s AA vs A-Q. Q high flop. Got it all in. Q on the river.

Mark was all in and Ari Engel called. Another K came on the board and Mark got a full double.

In a three way all in Ari’s KK>Andra’s TT>Tina’s AQ. Andra joined Mark at the rebuy window.

Susan, short, was all in the KTo – Victor’s hand was best.

A double up for Austin Fowler vs Clive Gavin

Andra’s KQ held when Jason Barnett’s flush draw on the flop did not come to fruition. Jason was out.

Nick Zivolich > Ari Engel. Nick shoved, Ari reraised all in in the small blind, Yuck. That was ugly.

Victor Iemolo would not fold and rivered his K to knock out Marsha Wolak who hit her Q on the flop.

Back at the outer tables a couple of hands: Tina AJ> Donny AK all in preflop

Back at the feature table Andra made bad decisions and stayed in the hand when she rivered her set with no club when there were four clubs on the board and Tom McDonald scooped a nice pot. This is why she can’t have nice things (or win).

Dave Bennett called Clive and hit his A.

Nick KK> Janice QJss all in on flop

Mark finished 9th when Andra’s Full house cracked his AA. AA<77 Dave Bennett, who also called Mark’s shove, considered betting the river as a bluff but, unfortunately for Andra, he didn’t. Mark mentioned something about Andra and sleeping on the couch after the hand.

A double for Dave Bennett through Likang Berninger who was subbing for “Lawyer Joe” Parrish.

Donny’s KK was best and Nick was out 8th

Andra’s 2nd card that was dealt flipped over, Ace of Clubs, so it became the burn card. The replacement was another Ace & she had AxQc. Likang was all in, Andra reshoved and Tina folded. Likang flopped & rivered a J and his KJo>AQ after Andra flopped her A for extreme damage to her stack.

Andra was out 6th, all in preflop with AQ. Four calls. Q on the flop but Dave hit set of fives! This was Andra’s first final table of the season.

Tina was out 5th at her first (of many) final tables of the season when Likang continued his run good. Likang had heaps at this point and was going to be hard to beat.

Donny was out 4th and the money was chopped four ways among the remaining players – they would now play only for the points!

With some new faces at the final table and 15 weeks left of the league everyone still can readily win a Main Event seat. If we continue to have the excellent attendance we have had we should have 8+ seats! Having a 32 player league this season means it will be the tail end of the season before anyone is out of it! We have a policy of allowing four substitutes per season to allow for members with work/travel conflicts. We’ve had some awesome players substitute but in the end experience playing in the league makes it difficult for sure for someone to come in and win right away. We welcome substitutes as it exposes them to the league and if in the area they may join next season.

The final table in order of finish was