Week 5: Jim “JDawg” Collins gets the win but the Duckman flies to the top of the leaderboard! 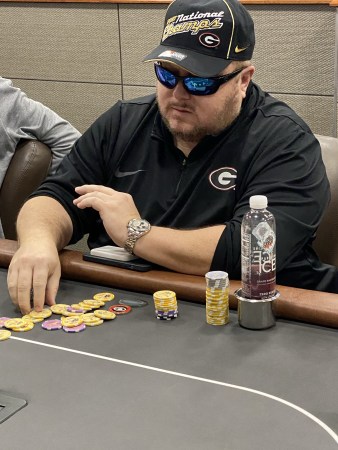 Week 5 is complete and we have a Duckman topping the leaderboard!

Aces for Tina “Always has it” aka “Ace Magnet” Pridgen, but Rob Benford believed her and folded when she threw in a 5k chip.

…and then an anticlimactic chop

On the river Tina bet, John Iemolo shoved his QQ but Tina called and rivered a flush.

In another hand, John Gordon was all in for 2800, Marv Karlins and Tina called. In the end Marv’s flush was better than Tina’s flush for the win.

John found a chip under his cup and it was decided that he still had 100. He ran it up to 800 but wasn’t able to get any further.

Paul Ladisa jams JT  Jim Collins calls with 66
Dave Bennett rejams AK Jim calls
Then Dave B rivers the A for the win!

Marv was all in but Tina found a fold

Jason was all in but no callers

Rob was all in with Akhh for a little less than 7K & John Iemolo shoved with KK. Rob flopped an A and held.

Then Mark was Out next hand AJ< Victor QQ

No callers when Jason shoved

Jason was all in pre flop again and Tina, after tanking a bit, shoved for less. A Jack in the window was followed by an 8 giving Tina a set and the win.

Jason’s luck ran out and Tina got the knockout.

John Iemolo was all in, but no callers.

Tina opened, Jim Collins called and Mike Laake reraised leaving 700 behind. After the flop he was all in and Jim’s TT bested Mike’s 99. Alumni league member Michael Laake substituted this week for Joe Parrish.

In a HUGE hand, Jim couldn’t call Marv’s 15K bet on the flop.

Andra was out when her remaining chips were taken despite her AIPF with AK. Ouch.

Tina was out 9th when her AT<Dave Bennett’s AK.

Then John Iemolo’s AK could not beat GingerDave Miller’s QQ and he was our 8th place finisher.

Dave Bennett continued rolling over everyone and Jacob Naumann was no exception – his AT<Dave’s AJ and he was out 7th.

Then Dave Bennett doubled through Georgia Jim Collins, the other big stack. After that Jim knocked out John Gordon in 5th place and then GingerDave Miller in 4th.

Jim Collins was our winner this week and Marv “The Duckman” Karlins, with his 3rd top three finish this season moved up to #1 on the Leaderboard unseating Jacob Naumann who is now in second place.

With 15 more weeks to play all members can still win Main Event seats but some members are emerging with consistent top finishes!

For those who are interested there is a WSOP Circuit Event going on now in Pompano – a first for that casino. Here is a link to the schedule. It is rumored that several league members will be there using their skills learned in the league to win that Ring!

One thought on “Week 5: Jim “JDawg” Collins gets the win but the Duckman flies to the top of the leaderboard!”